CHIANG MAI—The INEB Institute, an education initiative by the International Network of Engaged Buddhists (INEB), has announced a new three-month transformative learning program for 2019, the School of English for Engaged Social Service (SENS), which will run from 6 January–3 April 2019 in Thailand under the theme “Interfaith Understanding Towards Peace and Sustainability.”

“We have run a program called the School of English for Engaged Social Service for three years now on behalf of INEB,” INEB Institute Academic Director Ted Mayer told Buddhistdoor Global. “In that program, we bring together activists and those who work in service to society to develop their English skills. But in addition, we do much work on developing their capacity for self-awareness and mutual support, and at heart it’s a course in fostering leadership among young Asian adults so that they can successfully lead from a place of being spiritually grounded, and with sufficient understanding to meet the challenges of our era.”

The INEB Institute developed the SENS program with the goal of creating an English language program as a model to be shared, encompassing socially conscious language learning in a rich, cooperative environment that fosters personal growth and social engagement in a way that contributes to peace, understanding, and sustainability at a global level. 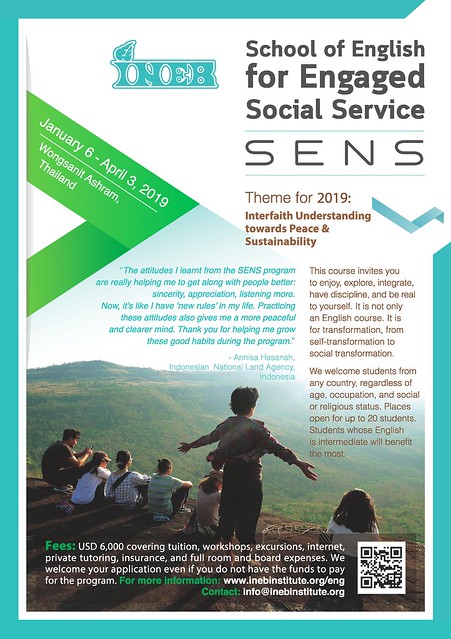 “The fourth annual School of English for Engaged Social Service program in early 2019 will have the special theme of ‘Interfaith Understanding Towards Peace and Sustainability,’” said Mayer. “The SENS program is one of two key programs initiated since 2016 by the INEB Institute, INEB’s institute for transformative learning.”

The INEB Institute was established with the intention of founding a model of higher learning by integrating personal and social-structural transformation in its programs. Established in the tradition of the socially engaged Buddhism promoted and practiced by INEB. The institute’s stated purpose is to help young people rediscover their fundamentally interdependent nature while developing the skills needed to help them become agents of genuine change. The institute’s programs are designed to integrate new practices and learning strategies that cultivate peace and reconciliation, environmental healing, alternative education, sustainable economics, and the capacity for spiritual growth and leadership.

“SENS was designed to be a place for learning English as a tool for leadership, self-cultivation, and social transformation. It is now a three-month course that takes place annually from January–April at the Wongsanit Ashram near Bangkok,” Mayer explained. “It is aimed primarily at young adults in Asia who have demonstrated a commitment to work for the wider common good, and who would benefit from having higher English language skills.” INEB was established in Thailand in 1989 by the prominent Thai academic, activist, and social critic Sulak Sivaraksa and a group of Buddhist and non-Buddhist thinkers and social activists with the aim of connecting engaged Buddhists around the world and promoting understanding, cooperation, and networking among inter-Buddhist and inter-religious groups to address global issues, such as human rights, conflict resolution, and environmental concerns.