A performance of I Am Buddha. From kalmteatr.ru

SOFIA—A musical performance titled I Am Buddha and staged by the B. Basangov Kalmyk State Theaterof Drama was presented in Kyzyl, capital of the Tuva Republic, from 16–18 April and is now running in Ulan-Ude, capital of the Republic of Buryatia, from 23–25 April.

I Am Buddha is a musical poem aimed at popularizing and sharing a deeper understanding of Buddhism as a religious and cultural phenomenon. It presents the life of Prince Siddhartha who became the Buddha, the Awakened One, through understanding the fundamental question concerning the suffering of human existence. Discovering the truths about the origin and cession of suffering, he transmitted his teachings for the benefit of all sentient beings. 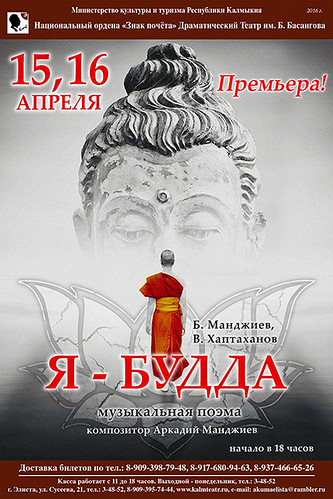 Poster from the premiere of I Am Buddha.
From kalmteatr.ru

Telo Tulku Rinpoche, the shadjin lama (head lama) of Kalmykia and honorary representative of His Holiness the Dalai Lama to Russia, Mongolia, and the members of the Commonwealth of Independent States, expressed happiness after watching the musical performance. “It was my old dream: with the help of art, and not just through teachings and advice, to present the history of the origin of Buddhism. Now my dream has come true,” he said. “While I was watching, tears of joy flowed from my eyes. I was sent back into the distant past, the ancient era when the Buddha lived. The actors did not just play on the stage, but lived in the atmosphere of that ancient era.” (Сохраним Тибет!)

The author of the concept for the performance is Hongor Elbikov, minister of culture and tourism for the Republic of Kalmykia. The scriptwriters are the artistic director of the B. Basangov Kalmyk State Theater of Drama Boris Mandjiev and state actor Victor Haptahanov, a member of the Union of Russian Writers. Boris Manjiev is also director of the unique performance, with music composed by Arkady Manjiev.

The B. Basangov Kalmyk State Theater of Drama is named after Bahatr Badmaevich Bassangov (1911–44), Kalmyk writer, playwright, poet, and translator. The theater’s troupe presented the Buddha’s life at the Tuvan State Theatre of Music and Drama, which bears the name of Victor Kok-ool (1906–80), Tuvan actor and script writer, and are now performing at the Buryat State Academic Theater of Drama, which bears the name of Khotsa Namsaraev (1889–1959), Buryat writer and one of the founders of contemporary Buryat literature.

For thousands of years the history of the Buddha's life has inspired untold millions to seek the truth of their existence and eternal peace. I Am Buddha has become an inspiring offering to Russian Buddhists and a vehicle for transmitting the Dharma to a wider circle of people, regardless of their religion or nationality. It is becoming a memorable cultural event in Russia’s “golden triangle of Buddhism”—Buryatia, Kalmykia, and Tuva—where Buddhism’s precious heritage has been preserved.

I Am Buddha has been staged with the support and advice of the clergy of the Central Khurul (temple) of Kalmykia, the Golden Abode of Shakyamuni Buddha. The tour of the performance in Tuva and Buryatia has been organized with the support of the Ministry of Culture of the Russian Federation and the Federal Center for Support of Touring Activities. A performance of I Am Buddha. From kalmteatr.ru