Korean archaeologists working in the grounds of a temple in Yangyang County, Gangwon Province, have unearthed a gilt-bronze statue of the Buddha that they believe to date to the 9th century. The figure is the largest known Buddha statue from the Unified Silla period (668–935) and among the most elaborately decorated from the whole Silla dynasty (57 BCE–935 CE). Given its artistic and academic value and because it is in relatively good condition compared with other statues from the period, scholars studying the artifact expect it to be designated a National Treasure.

“According to experts who were called upon to check the new discovery at the excavation site . . . the relic seems to be the largest of such kind from the Unified Silla period and holds high value both artistically and historically,” said an official at the Cultural Heritage Administration. (Korea Herald) 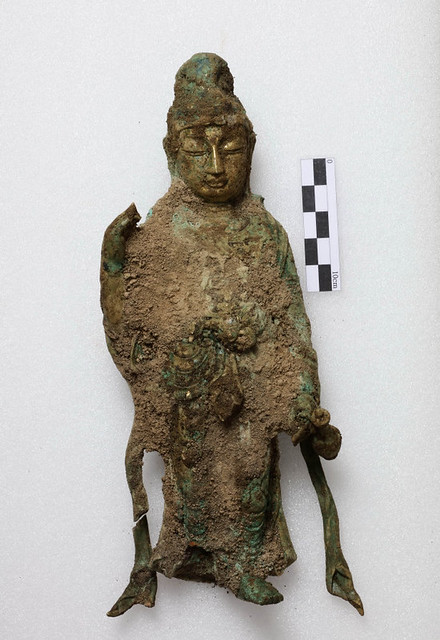 Korean archaeologists believe the gilt-bronze statue of the Buddha
dates to the 9th century. From koreaherald.com

Researchers at the Hanbit Institute of Cultural Properties said the statue is twice as large as typical statues from the era. The sculpture measures about 16 inches high and exceeds 20 inches together with its mandorla and pedestal. The researchers noted that it was very rare to find a gilt-bronze statue including mandorla and pedestal in Korea.

The researchers also observed that the manner in which the figure was holding the kundika (Sanskrit; a long-necked vessel used in Buddhist ceremonies for sprinkling water for purification) was unusual. Most images of the Buddha bearing a kundika show the figure holding the vessel by its neck, they said, while this example was holding the container by its handle.

A stone pagoda and other Buddhist relics had earlier been uncovered at the temple site where the statue was discovered.

The Unified Silla period was significant for Korean cultural, religious, and intellectual traditions, as the kingdom’s ties with Tang China resulted in the introduction of aspects of Chinese culture to Korea. Buddhism and Confucianism grew in the region during the period, and some Buddhist monks traveled from Silla to China and India to study.

The period is well known for its woodblock prints. In 1966, an ancient print of the Pure Light Dharani Sutra, dated to the 8th century, was found at a pagoda in the city of Gyeongju. The document is estimated to have been created no later than 704 and is believed to be the oldest surviving woodblock print in the world.