Haemin Sunim leads a group session at the School for Broken Hearts. From mprnews.com

South Korean Buddhist monk Haemin Sunim, a renowned meditation teacher, bestselling author, and a former professor, is determined to share the Buddhist teachings through as many channels as possible. Aiming to take the Dharma beyond the temple and into the lives of the people who need its wisdom most, Haemin Sunim has founded the School for Broken Hearts, where he shares the teachings in a way that speaks to people on a practical level and helps them cope with the heartache of their daily lives.

The forty-five-year-old Seon (Zen) monk was inspired to set up the non-profit teaching center in downtown Seoul, offering free and paid courses, after he realized that many people in pain were not finding succor in the standard advice they received at the temple from himself and his fellow monastics. 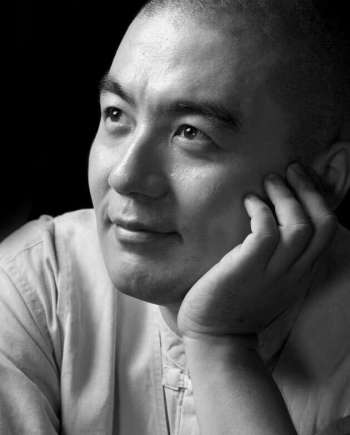 Haemin Sunim saw that he needed to connect with people on a personal level in order to realize his vocation of service. From twitter.com

With more than 20 years of experience as Buddhist teacher, Haemin Sunim explained: “In the beginning, I used to work in a Buddhist monastery and often met with people suffering with everyday difficulties. Some of the Buddhist teachers end up telling these people to just pray to the Buddha or meditate. I found their solutions to be not very satisfying.” (MPR News)

Envisioned as a place of refuge for the sick at heart, the School for Broken Hearts has now been up and running for some four years, offering support for people facing a variety life crises and heartaches—from depression and loneliness to divorce, illness, and career problems—operating on a model that Haemin Sunim hopes can be replicated elsewhere in the world.

“I wanted to start a school where people could actually talk about their real issues,” he observed. “If you’re going through a divorce, if you have cancer, just by being together with people who are going through a similar experience I realize that this can enormously help each other.” (MPR News)

No matter the cause of their broken hearts, people are welcomed and brought together in classes where they can share their experiences with peers, and speak with Seon monks, psychologists, and counselors. The unique center provides a haven of safety where people can receive healing in the form of connection with fellow sufferers, counseling, meditation instruction, and the wisdom of the Dharma.

“We have many programs and people find it refreshing to sit down and have open and honest conversations in a supportive environment,” said Haemin Sunim. “We use drawing and dancing and singing, different way to express yourself. People find it very liberating.” (MPR News)

One of the most successful classes at the School for Broken Hearts is for single mothers raising children with disabilities. “They were able to offer all kinds of really helpful advice to each other because many of them went through the same kind of experiences,” he said. “I think giving support, that’s what I like to do and that's where I find meaning in my life.” (MPR News)

One of the most influential Buddhist teachers and authors in South Korea, Haemin Sunim’s words of Buddhist wisdom and solace have garnered him a huge audience on Twitter, his followers now numbering almost 1.2 million. He is also a best-selling author, and his books, also aimed at helping people understand and overcome the challenges of daily life, have sold more than four million copies—Love for Imperfect Things: How to Accept Yourself in a World Striving for Perfection and The Things You Can See Only When You Slow Down: How to Be Calm and Mindful in a Fast-Paced World, which has been published in more than 30 languages.

“It makes me profoundly happy that my simple messages can inspire people and help them,” said Haemin Sunim. “I still remember a young mother who had lost her husband in a car accident and who sent me a heartfelt thank-you note for saving her from committing suicide: she said she had never thought before about loving herself, because love for her always meant giving it to someone else.” (Mail Online) A retreat program at the School for Broken Hearts. From publishersweekly.com

After studying at UC Berkeley, Harvard, and Princeton, Haemin Sunim undertook formal monastic training in Korea and then taught Buddhism at Hampshire College in Amherst, Massachusetts. In 2011, while on a fellowship at Seoul National University, Haemin Sunim began to understand that he needed to connect with people on a personal level in order to truly realize his vocation of service. He began holding meditation meetings that included sharing sessions about the joys and difficulties of day-to-day life. The small group rapidly grew to some 500 people, and Haemin Sunim was inspired by his success to start the School for Broken Hearts.

“I come out of a tradition of [Seon] Buddhism, and I practice meditation. I give lessons. The formal teaching is Buddhist doctrine and teachings,” said Haemin Sunim. “But in the temple, when people come in to pray, you might have coffee or tea, and the conversation is not usually about spiritual matters but about mundane, everyday life. I ask for questions. And often the questions are not about meditation but about daily struggle. What do I do to solve this problem, or that problem? Very specific. I try to offer my own answers.” (The Guardian)