Ani Choying Drolma has become something of an anomaly. A Buddhist nun renowned for her numerous humanitarian activities, which include the education of young girls, care of the elderly, and medical services for the underprivileged and dispossessed, her haunting, Dharma-inspired musical performances have made her one of the biggest pop stars in her native Nepal—a talent that is also garnering her a fast-growing international following.

Increasingly well known throughout the world for bringing Tibetan Buddhist chants and songs to mainstream audiences, her fans include such international music icons as Tina Turner, Tracey Chapman, and blues singer-songwriter and guitarist Bonnie Raitt, who by coincidence was one of Ani Choying’s own musical favorites while she was growing up.

Born in 1971 in a poverty-stricken refugee neighborhood of Kathmandu that she describes as “a mini-Tibet in exile,” Ani Choying’s early life was a far cry from that of the celebrated and revered monastic she has become. From the age of five, she recalls, life was a struggle, with daily beatings from an abusive father, who she says “was someone who exhibited some unpleasant qualities of men. . . . Somehow he was able to . . . develop a lot of my negative qualities, which led to a lot of anger, frustration, and bitterness." She still carries the scars, both mental and physical, from that chapter of her life. “My back was always covered in bruises, I was always bent over, but he seldom drew blood,” she writes in her autobiography Singing for Freedom (2009). (BBC, Post Magazine)

It was the constant beatings, compounded with the fear of being forced to “marry a man who could become my father,” that prompted the little girl to leave home at the age of 13, finding refuge at Nagi Gompa, a Buddhist nunnery attached to Ka-Nying Shedrub Ling, a Tibetan Buddhist monastery on the outskirts of Kathmandu. “My experience of abuse made me make a choice not to have it anymore,” she recounts. “Becoming a nun and going to the monastery was like going to heaven from hell.” (Post Magazine)

At the nunnery she learned to chant Buddhist scriptures, soon distinguishing herself and drawing the admiration of the other nuns for her melodious delivery, but her life took a turn for the unexpected when she was “discovered” singing devotional prayers by American guitarist Steve Tibbetts, who happened to be visiting Nagi Gompa in 1994. Tibbetts encouraged Ani Choying to share her talent with the international music scene, and in 1998 she travelled to the US to give her first performances for international audiences.

Ani Choying’s music reflects her Buddhist outlook and monastic vows. Gracefully declining to state how much money her album sales and concerts have raised, Ani Choying notes that much of the proceeds are directed to the Nun’s Welfare Foundation, an NGO she founded in 1998 to oversee a number of medical and educational charities in Nepal, including the Arya Tara school for young nuns, which she started in 2000, and to a kidney hospital, where hundreds of patients receive free dialysis twice a week.

“[I started] a kidney hospital for those suffering with kidney failure, which is a really tough situation for many of my brothers and sisters in Nepal,” she says. “I know this situation because my mother suffered with it and died.” (ABC)

Arya Tara boarding school, meanwhile, provides some 80 girls with free education in Buddhist scriptures, and more secular academic pursuits such as math, science, and computer skills. The foundation also covers the cost of sending the girls to college. The school aims to provide the nuns with the knowledge and ability to serve their communities in a humanitarian capacity, harnessing their compassion in effective, meaningful ways. “Traditionally, women’s education is neglected in Asia,” says Ani Choying. “Most of the girls at my nunnery are from rural areas where women are expected just to cook, clean, and bear children. Many cannot write their own names.”  (The Ani Foundation) 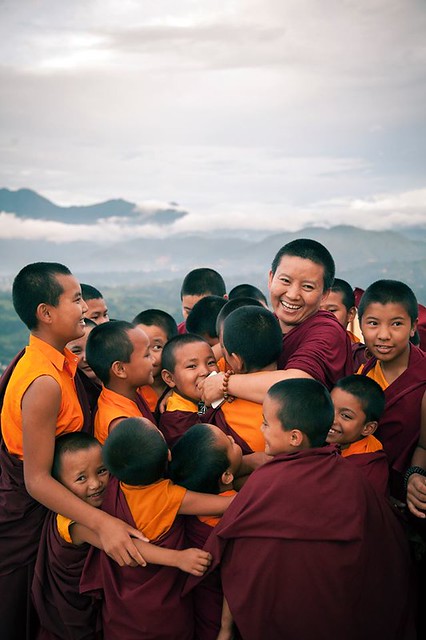 It is the work of the foundation and the hospital that motivate her to continue singing performing, Ani Cholying affirms, acknowledging that there are some who are critical of her high profile and lucrative singing career. “People in society will have different opinions,” she concedes. “I try my best to see how I can improve my attitude toward life, toward people, and toward the world, and to find ways to make the best use of my life.” (New York Post)