Pew Study Shows Global Increase in Restrictions on Religion in 2015

A new study released by the Pew Research Center on Tuesday pointed to a global rise in restrictions on religion in 2015, by both governments and citizens, reversing the downward trend observed from 2012–14. In Europe in particular, an increase in restrictions and social hostilities was recorded in the wake of the terrorist attacks in Paris and London and the refugee crisis. The report is the eighth in a series published yearly by the Washington DC-based Pew Research Center as part of the Pew-Templeton Global Religious Futures project, which analyzes religious changes and their impact on the world. The study looked at two factors: “The Government Restrictions Index,” which refers to all the actions, laws, and policies by governments to either give preferential treatment to one or more religious groups, or to restrict them. The other is the “Social Hostilities Index,” which examines harassment, intimidation, and violence related to religion by members of the public. The report is based on national and international statistics and sources, including the US State Department, the EU, and UN bodies. 2015 is the most recent year for which statistics are available.

The study concludes that 25 of the world’s 198 countries and self-administered territories have high, or very high levels of religious limitations. This is up 1 per cent from 2014. In addition, the number of cases of “limited harassment”—isolated cases, or those affecting a small number of religious groups—also rose. The Social Hostility Index rose from 23 per cent of the countries studied, to 27 per cent. Overall, the report concludes that in the case of isolated events, regardless of country or social group, restrictions on religion rose 6 per cent in 2015.

The highest level of government restrictions and social hostilities related to religion were found in some of the most populous nations studied: Egypt, India, Nigeria, Pakistan, and Russia. Egypt had the highest level of government restrictions in 2015 (scoring 8.7 out of 10), while Nigeria showed the highest number of social hostilities (9.1 out of 10). The highest increase in religious harassment and restrictions was found in Europe: in 27 (60 per cent) of European countries intimidation and harassment took place, an increase of 10 countries from 2014. In 24 (53 per cent) European countries, compared with 15 in 2014, force was used against religious groups.

This sharp increase was attributed to social tensions in Europe. In 2015, 1.3 million refugees applied for asylum, more than half of whom came from Afghanistan, Iraq, and Syria (all predominantly Muslim counties). Both governments and the public could be seen to react to this influx. Hungarian prime minister Viktor Oban, for instance, made the following statement: “Those arriving have been raised in another religion, and represent a radically different culture. Most of them are not Christians, but Muslims.” (The New York Times)

“I think we have a right to decide that we do not want a large number of Muslim people in our country,” Oban later added, and in another interview said: “The Islamic religion and culture do not blend with Christian religion and culture; it is a different way of life.” (The New York Times) 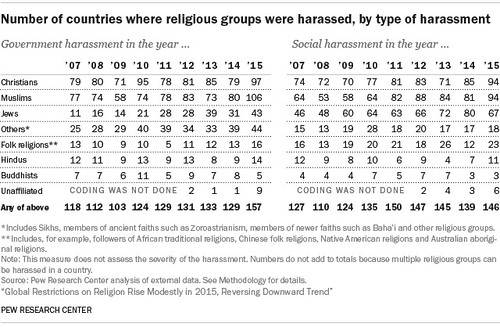 2015 also saw the January attack on the offices of the satirical newspaper Charlie Hebdo in Paris, the November attacks on (among others) the Stade de France and the Bataclan in Paris, and in December, the London Underground attack, leading to an overall increase in anti-muslin sentiment.

People of the Christian and Islamic faiths, the two largest religions included in the study, were harassed in the largest number of countries—128 and 125 respectively—reflecting the global spread of the two faiths. In contrast to the overall trend, harassment of Buddhists decreased in 2015.