The widely renouned Buddhist scholar Michael Jerryson (1974–2021) passed away on 9 July at the age of 47, following a two-year battle against amyotrophic lateral sclerosis (ALS, also known as Lou Gehrig’s disease). Jerryson was a Distinguished Professor in the Department of Humanities and Social Sciences—formerly the Department of Philosophy and Religious Studies—at Youngstown State University and lived in nearby Howland Township, Ohio. An expert on religion and violence, Jerryson authored and edited nine books on Buddhism, the religions of South and Southeast Asia, and comparative religion, and founded the Comparative Approaches to Religion and Violence unit at the American Academy of Religion. He also served as a consultant for the Taiwan-based global Buddhist organization Fo Guang Shan. 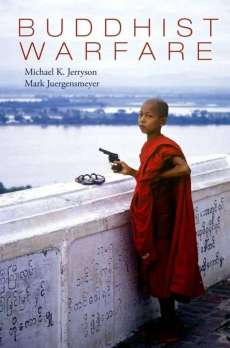 In May 2022, Equinox Publishing plans to release a special ebook titled Buddhist Violence and Religious Authority – A Tribute to the Work of Michael Jerryson, edited by Mark Juergensmeyer and Margo Kitts. As an introduction, the editors write:

Most recently in his critique of U Wirathu, the Burmese Buddhist monk whose advocacy of Buddhist nationalism in Myanmar has stirred a boiling pot of anti-Muslim resentments, Michael Jerryson has shown that reverence for Burmese religious authorities transcends respect for traditional Buddhist doctrine and monastic accomplishments. It emanates instead from the phenomenon of religious authority itself and from the cultural institutions which support it. His examinations have resulted in heightened sensitivity to the sociology of religious authority and violence. The scholarly contributions in this volume include discussions of Buddhism and violence, religious authority and nationalism, whether Buddhist, Christian, white, or other. (Equinox Publications) Jerryson’s many projects and interests brought him into contact with scholars and thought leaders around the world, many of whom have offered their respects on social media.

I had no idea. I never knew Dr. Jerryson personally, but I certainly knew his work. He has easily been the most prolific scholar in documenting the relationship between Buddhism and violence and challenging narratives of Buddhism as a peaceful religion. What a terrible loss. https://t.co/gi7bh91iID

Michael Jerryson was so much more than a mentor to me. And his passing leaves such a hole in my heart. I’m so lucky to have known him and have been mentored by him. Rest easy, Michael. pic.twitter.com/MTJLarM9SS

We note with tremendous sadness, the passing of Michael Jerryson ( @mjerryson).A groundbreaking scholar of religion and violence in SouthEast Asia and Buddhism & violence. He co-founded of the AAR's Comparative Religion and Violence Program Unit. https://t.co/qh7et2GBi1

— Study of Religion as an Analytical Discipline (@SORAAADWorkshop) July 12, 2021

The academic world has lost a great scholar in the death of Michael Jerryson, and I have a lost a fine colleague and friend. His work on Buddhism and on religion and violence will long endure, as will the memory of his driving intellectual curiosity and good humor. What a guy. pic.twitter.com/IHoYkUxupl

This is a terrible loss. I had the pleasure to get to know Michael through the Buddhism and economy projects at Copenhagen and working with him on religion and violence at AAR. Beyond his excellent research, he modeled kindness and humanity. This is a real tragedy. https://t.co/PvKFQlOjnp

Jerryson is survived by his wife and two children, five brothers and two sisters, and his mother. A private burial is planned, followed by a public service on 17 July. Organizers ask that unvaccinated attendees wear masks and practice social distancing. Youngstown State University is planning a memorial to be held after the Labor Day weekend (4–6 September), with further details to be announced.