Portland Art Museum, in the US state of Oregon, has announced a special exhibition for a rare 18th century Korean Buddhist painting title Obuldo, or Five Buddhas. The iconic painting, which was recently identified as having been stolen from one of Korea’s most famous Buddhist monasteries some 40 years ago, will be repatriated to Korea following the showing.

Running from 3 September to 4 December, the exhibition, Five Buddhas: A Korean Icon’s Journey through Time, sponsored by Korea’s Cultural Heritage Administration (CHA), will detail the painting’s journey, from its discovery, restoration, and transportation to the US. A special symposium is scheduled for 3 December before the rare work is returned to Korea.

“The Portland Art Museum is honored to help facilitate the return of this important work of art to Korea,” said the museum’s executive director Brian Ferriso. “We are grateful for the guidance and support we have received from the Korean Cultural Heritage Administration for helping us mount an important exhibition about Five Buddhas. Special recognition must also be given to and Sandra and Robert Mattiellis for their ongoing generosity. Their gifts to the Museum will continue to benefit our community for generations as they help us present the beautiful art of Korea.” (artdaily.org) 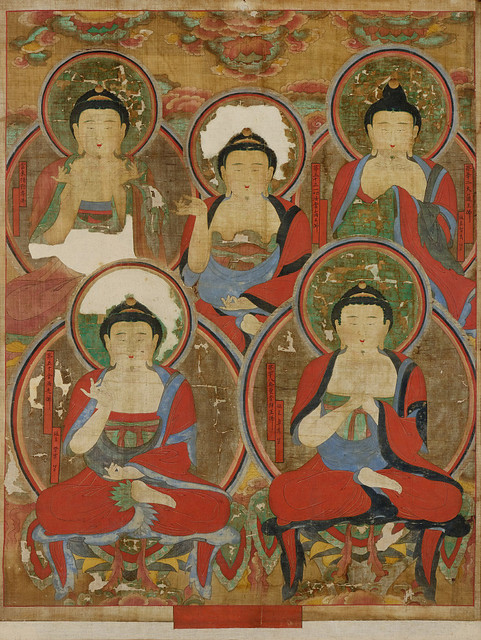 American collector Robert Mattielli, who lived in Korea for three decades from the 1960s as an artist and teacher, bought the painting in the early 1970s for just US$10 from an antique shop in Seoul’s Insa-dong neighborhood, where he came across the tattered painting folded up inside an old chest. At that time, many temples were being refurbished and Buddhist paintings often appeared on the market. Mattielli took the painting, which was damaged and in poor condition, to a well-known Korean restorer named Ki Jung-myon who was able to clean and frame the work. For many years subsequently, the painting was displayed in Mattielli’s home in Seoul before Mattielli and his wife, Sandra, returned to Oregon, taking the painting with them.

When the Mattiellis contacted Portland Art Museum in 2014 to donate Obuldo, they were able to have the painting examined by a visiting team of scholars from Korea’s National Research Institute for Cultural Heritage (NRICH), which was conducting a survey of the museum’s holdings. After several months of research, the NRICH determined that Obuldo, dated to 1725, had originally been one of a series of paintings adorning a small chapel at Songgwang-sa, a famous Seon (Zen) Buddhist temple in the mountains of southwestern Korea. Upon learning of its provenance, the Mattiellis offered to return the painting and it was agreed to do so after a special exhibition and symposium at the museum aimed at offering American art lovers an opportunity to view and learn about this historic piece of Buddhist art.

The symposium in December will feature a keynote address by Dr. Robert Buswell, a leading scholar of Korean Buddhism, titled “Songgwang-sa and its Significance in the Korean Buddhist Tradition.” Buswell holds the Irving and Jean Stone Endowed Chair in Humanities at the University of California, Los Angeles (UCLA), and is also distinguished professor of Buddhist Studies and director of the Center for Buddhist Studies. Professor Maya Stiller of the University of Kansas will talk on “Repentance for the Living and the Dead: The Avatamsaka Compound at Songgwang-sa,” in which she will address the ritual context of Obuldo.

“The Obuldo might have disappeared forever if there were not Mattielli who bought and framed the severely damaged work,” said a CHA official. “We’ll invite the Mattiellis to the painting’s enshrinement ceremony set for next year in order to officially convey our thanks to them.” (Yonhap News Agency) Songgwang-sa is one of the three principal Buddhist temples in Korea. From linoralow.com