Women from a rights group demonstrate in Dhaka to protest the alleged assault of the two Marma sisters. From dhakatribune.com

According to local media reports, a joint security team made up of Bangladesh Army and Ansar** personnel raided the indigenous Marma village of Orachari in Rangamati District on 22 January. During the raid, two members of the team are alleged to have raped an 18-year-old girl and sexually assaulted her 13-year-old sister in their home, after detaining their parents. Security officials have denied the allegations.

The Marma people are one of 11 indigenous ethnic communities living in the CHT, the majority of whom follow Theravada Buddhism. The region has been plagued by conflict for decades, amid tensions with the South Asian nation’s Muslim-majority population, and with minority communities complaining of persecution by the government and security forces stationed there.

The two sisters have since been admitted to the intensive care unit of Rangamati Sadar Hospital amid tight security. The older sister is reported to be in critical condition. The Chakma*** king, Devasish Roy, and Queen Yan Yan visited the victims on 25 January, expressing anger and frustration at the administration and security forces. In separate statements on Facebook, they complained that security personnel sought to prevent them from visiting the girls. They were only permitted to enter after protesting the obstruction, insisting that as community leaders they had the right to know the condition of the two sisters. (Dhaka Tribune)

Queen Yan Yan, who is originally from the Marma community, was able to communicate directly with the victims, who speak only Marma.**** “It was clear that both sisters were in a psychologically terrified state. As the queen speaks Marma, we were able to talk to them,” the king later stated. Calling for an impartial investigation, he added: “We do not know who was involved. The victims mentioned men in uniform, but they could have been members of either [the] army, or BGB, or police, or Ansar. It’s not confirmed yet.” (Dhaka Tribune) 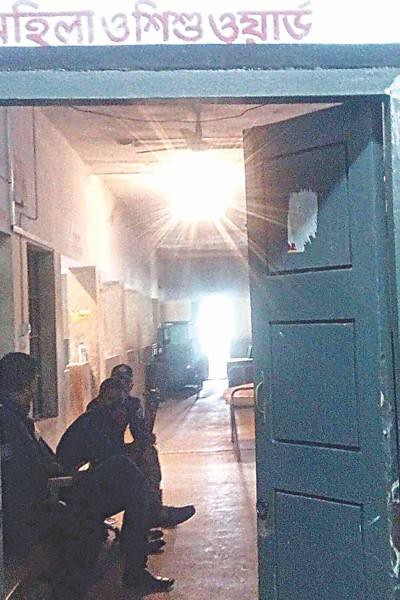 Police guards stationed at the women's and children's ward of
Rangamati Sadar Hospital, where the two sisters were being
treated, on 28 January. From thedailystar.net

Media reports also indicate that journalists seeking to speak with the victims at the hospital have been placed under police surveillance. Queen Yan Yan, who is also a human rights activist, was quoted as saying: “This is a strong case of army repression on ethnic minorities as the rapists were allegedly army men.” Quoting the victims, she added that the alleged rapists were wearing army uniforms and were of Bengali origin. (New Age)

Meanwhile, Inter-Services Public Relations Director Lt. Col. Mohammad Rashidul Hasan has denied the allegations, telling the Dhaka Tribune newspaper that the joint security team “had found an Ansar member inside that house. Later, he was handed over to the local Ansar commander for necessary action. No incident of rape happened there.”

The New Age newspaper reported that the elders of Orachari Village were summoned to a nearby army camp following the incident, where they were warned not to spread news of the allegations. According to IP News BD, the army, who are reportedly searching for the victims’ grandfather, subsequently interrogated the boatman who helped to transport the two girls to hospital.

Several human rights organizations in the country have issued statements condemning the alleged rape, demanding an independent investigation and punishment for the culprits. Prof. Banchita Chakma, a member of the National Human Rights Commission, told the Dhaka Tribune that the incident was very tragic and urged the authorities to punish those involved. “Otherwise, such incidents will happen again,” she added. (Dhaka Tribune) 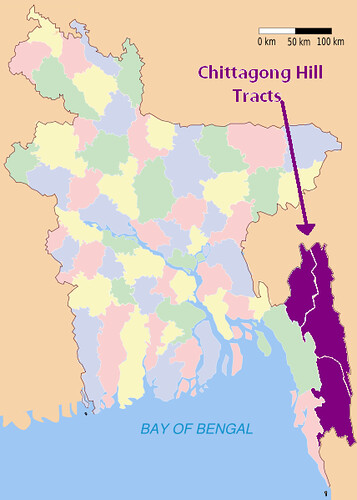 After 25 years of violent conflict, the government of Bangladesh in 1997 signed a peace accord with Parbatya Chattagram Jana Samhati Samiti (the United People's Party of the Chittagong Hill Tracts) a political party formed to represent the people of the CHT. Under the accord, the government is obliged to withdraw major military camps from the region, however a 2012 report by the International Work Group for Indigenous Affairs (IWGIA) indicates that one-third of Bangladesh’s army remains stationed in the CHT, along with thousands of personnel from other state military agencies, making the CHT the most militarized area in Bangladesh.

The main religion in Bangladesh is Islam, observed by 90.2 per cent of the population, according to government statistics for 2010. Hindus constitute 8.5 per cent, Buddhists (mostly Theravada) 0.9 per cent, and Christians 0.3 per cent.

* The Chittagong Hill Tracts in southeastern Bangladesh are comprised of three districts, Rangamati, Khagrachari and Bandarban, and are home to more than 11 indigenous communities, most of whom follow Theravada Buddhism.

*** The Chakma people are the largest indigenous ethnic community in the CHT, making up roughly half of the region’s population.

**** Marma is also the language spoken by the Marma community.

Buddhist Tourism in West Bengal and Bangladesh: An Untapped Resource
Marginalized and Ignored: The Corrosion of Bangladeshi Minority-Government Relations
A Path to Peace: The Engaged Buddhism of Venerable Tajay Bongsa
“Buddhist Voices from the Land of Rivers:” Looking from the Inside Out