A novice monk at Wat Arun Ratchawararam, or the Temple of Dawn, in Bangkok. From benarnews.org

The Lunar New Year is being celebrated in Thailand and neighboring countries this week from 13–15 April without the usual festivities for a second year in a row as the novel coronavirus pandemic continues. While major celebrations for Songkran, as the festival in called in Thailand—most notably the large public water fights—were canceled, the public in the predominantly Buddhist kingdom have been encouraged to observe traditional merit-making activities. The holiday, which is also celebrated in Laos, Sri Lanka, southern China, and northeast India, is also referred to as the Buddhist New Year.

On Monday, Thailand reported 985 new COVID-19 cases and on Wednesday the number had risen to a record 1,335 new cases amid the country’s third wave of infections. The current wave, according to government officials, has largely been driven by the B117 variant first identified in Britain, which is affecting younger people in greater numbers. The recent surge in cases has been linked to partygoers at nightclubs and bars. Since the end of last week, most of Thailand’s bars and nightclubs have been closed by order of the central government.

"The period after Songkran is a critical time to control the outbreak. If not, we could see 10,000–20,000 cases per day," said Opas Karnkawinpong, a senior health official, who suggested that those who could should work from home for as long as two weeks following the holiday. (CNA) 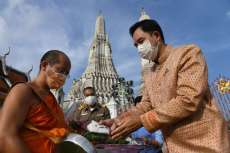 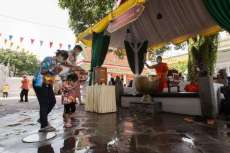 A family receives holy water from a monk at Wat Po in Bangkok. From benarnews.org

Along with preventive measures, officials have established several temporary treatment centers and field hospitals in major cities in case the virus does become more widespread.

“Although infections are spreading fast and found in many provinces across the country, they are mostly imported there," Opas Karnkawinpong, director-general of the Department of Disease Control, told reporters. "Please be careful and avoid crowded places, especially during Songkran.” (CNA)

Celebrations have been centered on outdoor locations where social distancing could take place. Culture minister Ittipol Khunpleum led officials and celebrants in a “New Normal, Preserving Thai Culture” event at Wat Arun Ratchawararam in Bangkok, where he participated in a traditional offering to Buddhist monks. Other temples in the city, as well as those elsewhere in the country, could be seen with light crowds and many people wearing masks as they participated in traditional merit-making activities. Families visit Wat Chai Thara Ram on the island of Phuket. From pattayamail.com

Thailand began its COVID-19 vaccination campaign on 28 February, relying on the Chinese-manufactured Sinovac. However, fewer than 100,000 residents out of a population of some 70 million have received their second dose of the vaccine. The country has also received doses of the AstraZeneca vaccine since February. Plans are now underway for a full mass-immunization campaign in June with some 26 million AstraZeneca doses that will be produced in Thailand by local company Siam Bioscience to complement 35 million imported doses.

Neighboring Cambodia is seeing its first wave of coronavirus cases after over a year with no major recorded spread in the country. Cambodia’s outbreak began in February with consistent double-digit new cases, recording 576 new cases in a single day on 9 April. The death-toll there is rising rapidly as well, with no deaths recorded prior to 11 March and since then a total of 35.

To date, Thailand has reported 35,910 confirmed cases of COVID-19 infection, with 97 deaths.

According to census data, 95 per cent of Thais are Buddhists. The country’s second-largest religion is Islam, representing some 4.19 per cent of the country’s population. Christians make up just over 1 per cent. The kingdom has some 40,000 Buddhist temples and almost 300,000 Buddhist monks.

Love in the Time of Coronavirus, Part Two: Bodhicitta
Metta in the Kindtime
Unity and Interdependence: Joining Together Through Our Crisis