His Holiness the Dalai Lama speaking at the conference Celebrating Diversity in the Muslim World in India. From dalailama.com

Muslim leaders from across India and a delegation from Iran met last week in New Delhi for a conference titled Celebrating Diversity in the Muslim World. The conference was organized by the Muslims of Ladakh and sponsored and attended by His Holiness the Dalai Lama.

Ladakh, situated on a high plateau in the Himalayan mountains of northwest India, has only a small population of Muslims. Nonetheless, Siddiq Wahid, a senior fellow at the Centre for Policy Research in New Delhi and former vice chancellor of Islamic University, Kashmir, noted in his introductory remarks that Tibet and the region have a long history of interchange with the Muslim world as well as geographical ties to contemporary Muslim nations. 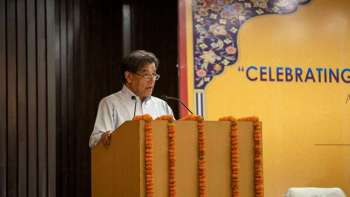 Addressing an audience of around 350 participants, the Dalai Lama said, “I felt that Indian Muslims should be more active in promoting religious harmony.” He continued, “I thought that a meeting of Indian Muslims here in Delhi could be helpful and I really appreciate your having arranged it. I’m also happy to know that brothers and sisters from Iran are joining us here. We have to make clear to the eyes of the world how important it is to maintain religious harmony.” (His Holiness the Dalai Lama of Tibet)

“Today, everyone wants to live a happy life. No one wants to suffer. Indeed, happiness is part of the basis of our survival,” the Dalai Lama told those in attendance. “Scientists have concluded that basic human nature is compassionate. This is linked to individuals’ survival being dependent on the rest of the community. Those who grow up in a more compassionate atmosphere tend to be happier and more successful. On the other hand, scientists suggest that living with constant anger or fear undermines our immune system. Interdependence means that all 7 billion human beings belong to one human community.

“In today’s world, despite material development, many problems we face are of our own creation. They are provoked by our tendency to see others in terms of ‘us’ and ‘them.’ Children don’t make such distinctions. They don’t care what religion, race, or nation their playmates belong to so long as they smile and play happily. We need to remember the oneness of humanity, that in being human we are all the same, and I am committed to letting people know this.” (His Holiness the Dalai Lama of Tibet)

As he closed his statements, the Tibetan spiritual leader remarked that he is now 84 years old and wishes to devote himself to the promulgation of the fundamental Buddhist psychological teachings of loving-kindness and compassion. His Holiness the Dalai Lama recounting a funny experience. From tibet.net

Muslim leaders at the conference echoed the Dalai Lama’s call for harmony. Maulana Syed Kalbi Jawad Naqavi, a Shia teacher from Lucknow in India, said that a true Muslim is one who helps others no matter their faith. Maulana Mahmud Madani, from Deoband in India, mentioned seeing Shia and Sunni Muslims worshipping together in some places and that it is usually political differences rather than religious ones that cause problems. Dr. Mohammed Husain Mokhtari, chancellor of the University of Islamic Denomination in Tehran, spoke of the benefit to all beings that comes from the recognition of religious diversity. Dr. Mohammed Husain Mokhtari of Iran speaking at the conference. From dalailama.com

India is a predominantely Hindu nation, with 80 per cent of its citizens adhering to that religion according to its latest census. Muslims make up the second largest religion, at 13 per cent, followed by Christians at 2.3 per cent, and Sikhs at 1.9 per cent, with Buddhists representing just 0.8 per cent.* According to the Washington, DC-based Pew Research Center, the Muslim population in India is the second-largest in any one country and is the fastest growing religion in India, expected to account for 18 per cent of the total population by 2050.

The Dalai Lama’s Visits to Kalmykia
Dalai Lama Launches “Happiness Curriculum” for Schoolchildren in New Delhi
Change from Within: Creating a World of Hope, Love, Compassion, Empathy, and Forgiveness
Self-reflection in Kashmir
Developing Consideration of Others