The renowned Zen Buddhist monk and teacher Thich Nhat Hanh (known affectionately as Thay), arrived in Thailand on Saturday, as the Plum Village monastic community that he founded in southern France enters the fourth week of its annual three-month retreat for monastic residents, led by the community’s senior Dharma teachers.

Plum Village expressed its happiness that Thay, who turned 90 in October, was strong enough to undertake the journey from France after an extended period of ill health, saying in an announcement, “We are very happy that Thay is still able to make such a journey, to offer his presence in Asia and be closer to his homeland [Vietnam] at this time.” (Plum Village) 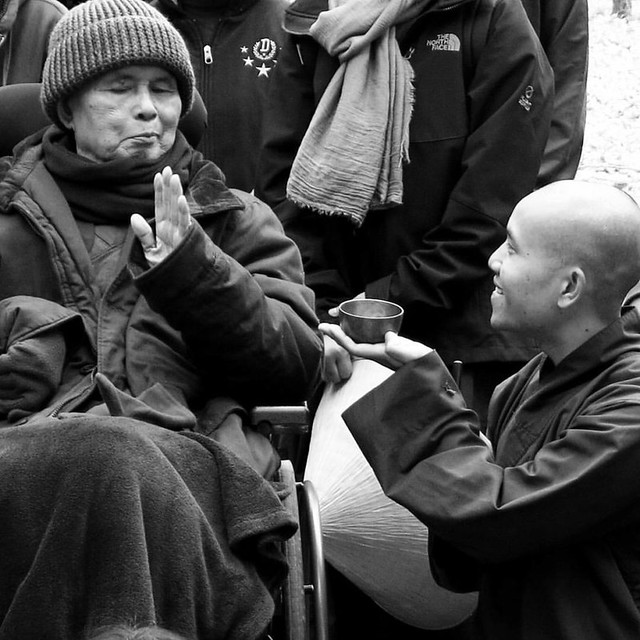 Thay was hospitalized in France in November 2014, following a severe brain hemorrhage. After months of rehabilitation, he was released from the stroke clinic at Bordeaux University Hospital in April 2015 and returned to Plum Village, where attendants from the monastery and visiting medical professionals continued to aid his recovery. On 11 July 2015, Thay was flown to San Francisco to undergo a more intensive rehabilitation program at the UCSF Medical Center. In September 2015, Thay spoke his first words since his stroke and in January this year was allowed to return to Plum Village, where he has remained under the care of the members of his community.

“One week ago, Thay communicated a clear and determined wish to travel to Thailand. Thai Plum Village, on the edge of the Khao Yai National Park, is the largest practice center in Asia in Thich Nhat Hanh’s tradition, with over 150 monastics disciples, Plum Village said in its announcement. “Although Thay’s wish has not been easy to realize, we are very happy to announce that at midday today [9 December], Thay and a small group of attendants took off from Bergerac airport.” (Plum Village)

Many senior venerable from Thailand and Vietnam traveled to receive Thay and pay their respects, along with hundreds of monastics and lay practitioners.

Thay, born Nguyen Xuan Bao on 11 October 1926, is an influential Zen teacher, poet, and the author of more than 100 books. As an active advocate for peace, he was influential in the anti-war movement, encouraging non-violent protests during the Vietnam War. Thay founded the Order of Interbeing and the Unified Buddhist Church, and in 1982 established the Plum Village Buddhist Center in France with his colleague Sister Chan Khong. He has been a central figure in the transmission of Buddhism to the West and in marrying an authentic Zen tradition and lineage with a progressive approach to issues such as social activism, science versus faith, and religion versus spirituality.