Britain’s University of Wales Trinity Saint David and the Hong Kong-based Chin Kung Multi-Cultural Educational Foundation (CKMEF) this week launched a joint Academy of Sinology in Wales aimed at developing a range of postgraduate programs and cultural events for the university.

The launch was held on the university’s Lampeter campus during the first International Interfaith Symposium for Harmony and World Peace, during which Professor Medwin Hughes, the university’s vice-chancellor, and Buddhist monk Venerable Master Chin Kung signed an agreement to establish the academy, which will offer postgraduate scholarships for master’s degree programs in Buddhism, Confucianism, Daoism, and Sinology, with a number of annual international conferences planned on the theme “One Humanity, Many Faiths.” 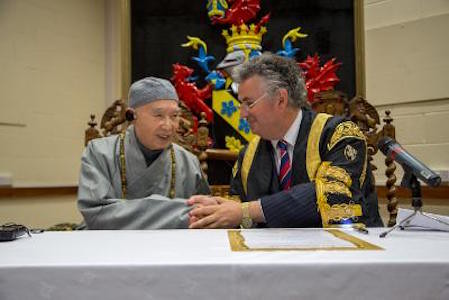 Ven. Chin Kung, left, and Prof. Medwin Hughes, vice-chancellor of the
University of Wales Trinity Saint David, at the signing ceremony for the
new Academy of Sinology. From uwtsd.ac.uk

“Today is a very rare opportunity to gather here in Lampeter,” said Ven. Chin Kung. “But why are we here? Last year I had the opportunity to meet with the vice-chancellor and speak about preserving the four ancient civilizations of the world. The Chinese civilization is at the edge of being extinct if we do not preserve it. This ancient civilization exists in four complete volumes and if nobody can understand them they will be without value; worthless. The only way to preserve them is to train teachers who will be able to read these ancient texts and preserve their Chinese wisdom.”

‌“Sinology teaches us true wisdom; compiled over a thousand years ago, but still valid in today’s world,” he said. “What we are doing here is a very big thing; we are preserving a culture and wisdom for the whole world and the whole world will benefit from the teaching of harmony and happiness. Through the teachings of these texts we can all live happy lives. We can build a stable society, strong and prosperous countries and peace between all countries.”

Prof. Hughes and Ven. Chin Kung also signed a declaration for “Harmony and World Peace” based on the principle that all religions share a common, universal element of shared values, toleration, compassion, and a respect for the views and beliefs of others.

“The declaration of harmony and peace is a powerful statement of intent that cements the relationship between the Chin Kung Multi-Cultural Educational Foundation and the university and is very much in accord with the philosophy of our royal patron, His Royal Highness the Prince of Wales,” said Prof. Hughes. “The declaration illustrates the aims of the strategic agreement that we have signed with the foundation, which is very much grounded in the tradition of the university’s Lampeter campus as a multi-faith and multi-cultural center, rooted in Wales, but looking out across the world. We are very grateful to the Venerable Master for his generosity in enabling us to develop the academic work of the university in this way.” (University of Wales Trinity Saint David) 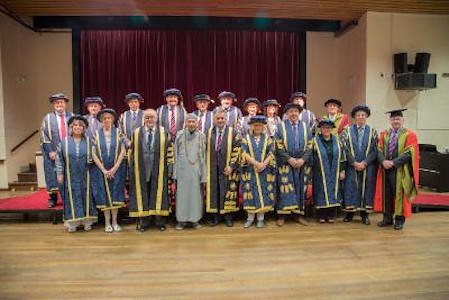 The launch of the academy was one of a number of activities marking the new partnership between the university and the CKMEF. The events included ceremonies, lectures, and seminars that reflected the organization’s Buddhist beliefs and Chinese values, including the first Buddhist ancestral remembrance ceremony to be held in Wales.

The Chin Kung Multi-Cultural Educational Foundation is a Hong Kong-based organization established by Ven. Chin Kung. Born in 1927 in Anhui Province, China, Ven. Chin Kung entered the monastic life in 1959, when he was ordained at Lintzi Temple in Taiwan. He is also the founder of the Corporate Body of the Buddha Educational Foundation, an organization based on the teachings of Pure Land Buddhism.