A helicopter drops water over Wat Buddha Dhamma. From facebook.com

Wat Buddha Dhamma, an Australian Theravada monastery in the Thai Forest Tradition, has been damaged by one of the many bushfires currently spreading across the state of New South Wales. The “Three Mile Fire” is now burning near Wiseman’s Ferry just north of Sydney. So far, only one building at the monastery is thought to have been destroyed by the fire, although others in the compound are under threat. All monastics and residents of Wat Buddha Dhamma have been evacuated to safety.

According to media reports, the fire claimed one dwelling yesterday afternoon within Wat Buddha Dhamma. The monastery’s largest building, the main teaching hall, or Dhamma Sala, was still intact based on the most recent available information. Fire crews have been fighting the blaze around the building with a water-bombing helicopter.

Wat Buddha Dhamma was founded in Dharug National Park in 1978 by the renowned Buddhist nun Ayya Khema, with Phra Khantipalo installed as the first abbot. According to the monastery website, the center is dedicated not only to monastic cultivation, but also to lay practice, with retreats scheduled regularly as well as an open invitation to visit. 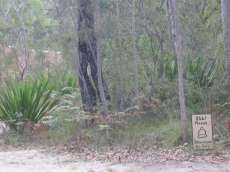 A sign at the monastery requesting quiet, 2012. From facebook.com Monastic and kuti, or meditation hut, 2012. From facebook.com

Sri Paññā, a Thai forest monk living in Australia posted on Facebook in respone to the news:

I was among the very first group of monks headed by Ajahn Kehmavaro to live at Wat Buddha Dhamma when it re-opened in 2008 after long neglect since Ayya Khema and Phra Kantiphalo left the place. We took so much effort in rebuilding the place. It’s a sad moment to hear most of it went into flames. When we were there John Johnson our senior yogi who happened to be a celebrated fire fighter gave us the first bush fire management training. This is not the first time a forest monastery in Australia has been engulfed by bush fires. Keeping up with Dhamma time to contemplate on impermanence and move on with much Samvega. (Facebook) The main hall of Wat Buddha Dhamma. From wbd.org.au

Residents of Sydney have been blanketed in smoke for several days as wildfires rage in nearby areas. The Bureau of Meterology for New South Wales called Sydney “brown town” yesterday, adding that, “Smoke is forecast to linger overnight and into Thursday. Smoke will also affect areas east of fires in other parts of the state due to westerly winds.” (ABC)

There is currently a total fire ban for the area, and communities in rugged areas have been warned to have emergency plans in place in the event of a wildfire near them.

Wat Buddha Dhamma has a webpage that accepts financial support.