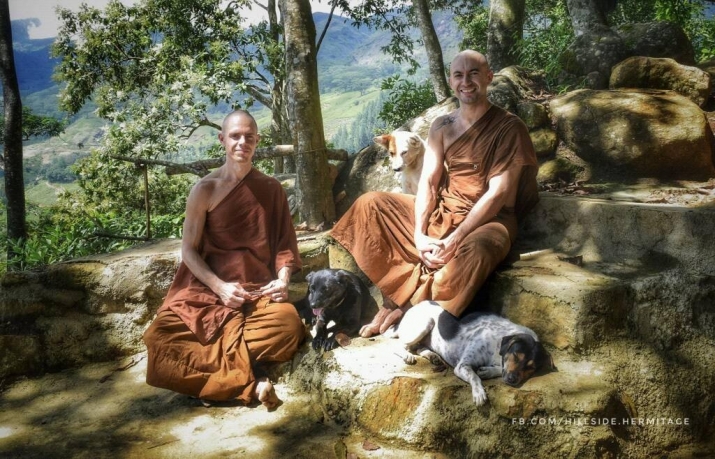 Sri Lanka has long attracted Buddhist monastics and scholars from around the world with its rich Buddhist heritage and resources. While the nation’s monastic centers and universities are renowned hubs of Buddhist education, the island’s forest hermitages are also high on the list of attractions for those seeking to practice and study Buddhism. Recently, two Western monks have taken to social media to express the spiritual joy of living in the beautiful wild hills of the island’s Central Province.

Thaniyo Thera from South Africa and Nyanamoli Thera from Serbia, both of whom have received higher ordination, have built kutis (small monastic huts) for their simple harmonious living. When contacted by Buddhistdoor Global, Ajahn Nyanamoli stated: “There was nothing here when we came—no buildings, no water, no paths. We built the hermitage ourselves.” He explained that they had built the hermitage gradually, keeping everything simple and without harming the beautiful natural surroundings, with the help of two local laymen, as some Vinaya rules prohibit the monks from digging the soil themselves.

The retreat, dubbed “Hillside Hermitage,” is located in the Knuckles Mountain Range, a three-hour drive from the city of Kandy. After a number of failed attempts to find a suitable hermitage, Ajahn Nyanamoli was led to this place by devotees who came to know the wish of the two monks. Upon seeing the isolated, pristine environment, amid tall, old-growth trees, Ajahn Nyanamoli immediately decided this was the right place. As the mountain range is a biodiversity hotspot that includes a protected rainforest, the two monks are very fortunate to be living in such an environment, where they can also meditate regularly. Ajahn Nyanamoli rests during a regular trek (tudong or carika) around the forest reserve near the hermitage. Photo by Ajahn Nyanamoli

Fully ordained in the forest tradition of Ajahn Chah, the two monks trained for years—Ajahn Nyanamoli in the UK and Thailand, and Ven. Thaniyo in the UK—before coming to Sri Lanka. Asked about his decision to undertake the monastic life, Ajahn Nyanamoli replied: “There was nothing specific that made me want to become a monk, it was more of a general increase in awareness of the inevitability of suffering in a human life.” The two monastics depend on daily alms rounds in the villages below the mountains, which requires almost two hours for the whole journey. Ajahn Nyanamoli explained that they also receive funding from kind people who follow their activities on Facebook. The funds, deposited in the hermitage's account and managed by a lay trustee, cover other expenses, such as building materials for the kutis and their maintenance.

Their regular Facebook updates offer the public an opportunity to learn about monastic life on the mountain. Both monks upload amazing photos of their daily activities on the mountain, where they live in harmony with other species. “We came across great variety of snakes, from harmless ones to venomous, such as cobras, kraits, and vipers,” said Ajahn Nyanamoli. “There are many types of endemic lizards, frogs, a few different species of mountain eagles, lots of sambar deer, wild boar, and similar.” Although local residents have cautioned them about the presence of leopards, Ajahn Nyanamoli said they had yet to sight one.

The two monks usually try to document the animals they encounter. Often the animals are harmless, if they are left alone, however there are occasions when the monks needed to take precautions—such as when a spectacled cobra fell on the roof of the kuti, they had to gently catch and release the snake out of harm’s way. On another occasion, “We captured a Sri Lankan banded krait from the tea bushes nearby, and then released it further away into deeper forest.” However, the Thera lamented that even in this deep wilderness, the environment still faces human-related dangers. There are hunters roaming the forests and the large trees are easily felled illegally. A cobra that harmoniously inhabits the hermitage with the two monks. Photo by Ajahn Nyanamoli

Using photography skills gained before his ordination, Ajahn Nyanamoli explained that he aims to show people an alternative lifestyle, dedicated to the practice of the Dhamma and removed from direct contact with society. “The pictures we take are a simple insight into a real possibility of such a lifestyle that is closer to the wilderness and nature.” Although deep in the forest, the monks continue to maintain one of the core duties of a monastic: once in a while, they teach the Dhamma, either via correspondence or in person, or by recording Q&A sessions. “Except that, we make a point of not becoming too involved in any other activities that would take us further away from the natural environment in which we live,” Ajahn Nyanamoli noted.