Anukampa Bhikkhuni Project: The First Buddhist Nunnery in the UK

The run-up to October this year will see exciting steps being taken towards establishing the UK’s first ever monastery for bhikkhunis (Pali; fully ordained Buddhist nuns). British-born Theravada monk Ajahn Brahmavamso Mahathera (better known as Ajahn Brahm), the abbot of Bodhinyana Monastery in Western Australia, has generously lent his support to Anukampa Bhikkhuni Project, as the initiative is known, and to the project’s coordinator, British nun Venerable Canda, through a busy schedule that will include a milestone teaching tour of the UK entitled, “Buddhism in the 21st Century.”

The aspiration behind Anukampa Bhikkhuni Project (anukampa means “empathic compassion”) is to help people grow in the Dhamma and to nurture spiritual qualities such as contentment, compassion, wisdom, and peace. The project aims to build a community of like-minded people who wish to practice the teachings of the Buddha, establish a bhikkhuni presence in Britain by responding to teaching invitations and offers of support, and, primarily, to found and develop a harmonious training monastery for bhikkhunis dedicated to the goal of awakening.

The scheduled tour by Ajahn Brahm, who is also spiritual adviser to Anukampa Bhikkhuni Project, is the first major fundraising project towards accomplishing these aims, offering a rare opportunity to receive the teachings of Ajahn Brahm in his homeland and to help establish a bhikkhuni presence in the UK. 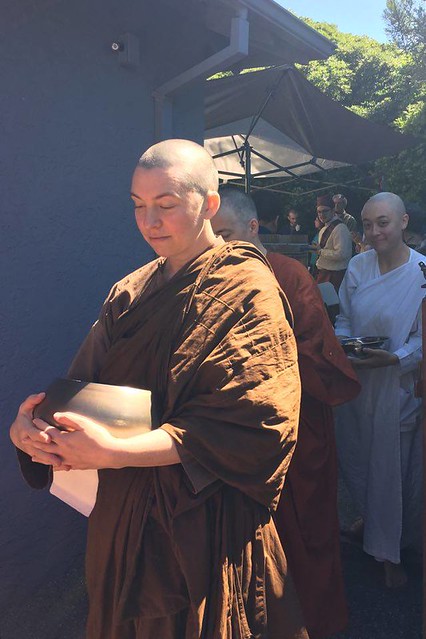 Venerable Canda during the morning alms round. Image courtesy of Anukampa Bhikkhuni Project

Reviving and strengthening an ancient lineage

The history of female ordination in Buddhism dates back to the time of the Buddha himself, who founded the bhikkhuni order when he ordained his own maternal aunt and stepmother Mahapajapati Gotami. From the very early days of the Buddha’s ministry, bhikkhunis played an important role in disseminating the teachings and in the formation of the monastic sangha. Not only was there relative parity between the worldly status of bhikkhus and bhikkhunis, but the Buddha also declared that women were just as capable of attaining awakening, or Nirvana, as men. At a time in India when women were advised that they needed to aim to be reborn as a man in their next life in order to progress spiritually, the Buddha’s assertion that the path to spiritual awakening was open and available to women here and now was revolutionary.

According to historical records, however, the various bhikkhuni sanghas of traditionally Buddhist countries eventually died out at different times in history. This can be viewed not only as a setback for the spiritual aspirations of Buddhist nuns, but also for the future continuation of the Dharma. The Buddha taught that the longevity of the Dharma rests on having an interrelated community of bhikkhunis, bhikkhus, laywomen and laymen, known as the fourfold assembly. It is pertinent to bring attention to the fact that the bhikkhuni sangha in Myanmar may have existed right up to the 19th century. If this can be confirmed by national records, there may be less distance between the modern bhikkhuni sangha and its earlier counterparts than is commonly believed.*

In response to the frequently asked question about why bhikkhuni ordination matters, Australian Theravada monk Bhante Sujato points out that bhikkhunis enter upon a way of training that is finely tuned to support the holy life. They feel nurtured and supported by the knowledge that they have fully entered into the sangha, and are practicing within the same community as the arahants (Pali; ones who have attained the state of nirvana) of old. He further points out the need to recognize that “the principle of equality for all is based on the same ethical values that inform the heart of true Buddhism: universal loving-kindness and compassion.”**

In 1996, through the efforts of the Sakyadhita International Association of Buddhist Women, the Theravada bhikkhuni order was revived when 11 Sri Lankan women received full ordination in Sarnath, India in a ceremony held by Ven. Dodangoda Revata Mahathera and the late Ven. Mapalagama Vipulasara Mahathera, with assistance from monks and nuns of the Jogye Order of Korean Seon Buddhism. The first Theravada bhikkhuni ordination in Australia was held in Perth on 22 October 2009, at Bodhinyana Monastery. Four nuns from Western Australia’s Dhammasara Nun's Monastery—Ajahn Vayama, Ayya Nirodha, Ayya Seri, and Ayya Hasapanna—were ordained as bhikkhunis in full accordance with the Pali Vinaya.

Despite this, the ordinations stirred controversy and met with substantial resistance within the more conservative sectors of the monastic sangha, highlighting how far we have still to go before the equality the Buddha worked hard to establish for female monastics becomes a living reality today.

At present, there are many monasteries for monks around the world, but very few for female monastics and far fewer for those who wish to undertake training towards full bhikkhuni ordination, which plays a large part in Ven. Canda’s motivation. Her personal story testifies to the complexity of the situation for women seeking to fully renounce the householder's life and to train according to the guidelines set down by the Buddha, in the same way as monks.

On first coming into contact with the Buddha's teachings at a 1996 on retreat in India, Ven. Canda, then Lucie Stephens, was so profoundly moved that she made an inward resolution to devote the rest of her life to the path. For the next seven years she meditated and gave service on back-to-back retreats, mostly in India and Nepal, working along the way to support herself. As she witnessed inner changes, including a deepening of contentment, increased equanimity, and a growing fascination with the process of meditation itself, her aspiration to renounce lay life intensified. However, ordination opportunities for women were so rare that she was unable to find a suitable monastery. Disheartened yet not resigned, she returned to England in 2002 to pursue a degree in Ayurvedic medicine.

Ironically, a year into her degree, Lucie heard about a rural monastery in Myanmar that provided opportunities for women to ordain as eight-precept Burmese nuns (Burmese: thilashin). After deciding to take temporary ordination in Myanmar for three months during her degree it was tempting to stay on, but Lucie’s sense of commitment required that she return to the UK to complete her studies. After graduating she ordained for the long-term in 2006 and spent the next four years pursuing intensive meditation under the guidance of Sayadaw U Pannyajota. She also encountered the Thai Forest Tradition through Ajahn Maha Bua in Thailand, with whom she spent an inspiring six weeks. Thailand was more politically stable than Burma but monastery conditions for women were cramped and monastic visas extremely hard to come by for nuns, whose monastic status is not recognized by Thai law.

Over those years, she became increasingly drawn to samatha practice (the development of calm, still states of mind known in Pali as jhanas) as a means to develop deeper insight. By 2010, however, the ascetic lifestyle, climate, and diet in Myanmar had taken a severe toll on her health, leading to her return to the West. This happily coincided with the chance discovery of Ajahn Brahm’s teachings. His emphasis on love, kindness, and letting go as a means to jhana and insight resonated so deeply and immediately with Ven. Canda that learning directly from him became her new goal. Bhikkhuni ordination still seemed out of reach and did not really occur to her until the second time she met him. 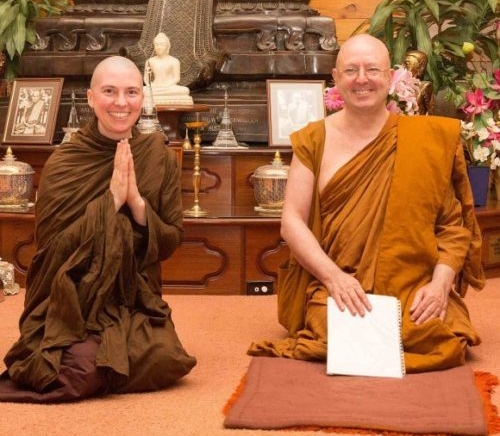 “I had been living as a novice nun for five years, when Ajahn Brahm told me matter-of-factly about bhikkhunis practicing in Perth. A wave of inspired joy swept through me and I knew instantly in my heart: if I had the chance for full ordination, I’d take it!” Consequently, after two years as a wandering nun in Europe, Ven. Canda finally had the opportunity to travel to Australia, where she has been living since 2012. She joined the Dhammasara community in Perth and took full bhikkhuni ordination in April 2014, with Ayya Santini as preceptor. In October 2015, Ajahn Brahm asked Ven. Canda to take steps towards establishing a monastery in the UK to increase equality in practice and ordination opportunities for women, in response to which Anukampa Bhikkhuni Project was born.

Ven. Canda has recently undertaken a series of activities to raise awareness and a community of supporters on the ground. She was also fortunate to have the opportunity to visit the United States (sponsored by the California-based Alliance for Bhikkhunis) and found it incredibly inspiring to meet other bhikkhunis who have successfully established harmonious, joyful communities of sincere practitioners. She was delighted when Ayya Anadabodhi and Ayya Santacitta of the Aloka Vihara Monastery in California agreed to be advisors to Anukampa Bhikkhuni Project.

In June this year, Ven. Canda undertook a very significant walking pilgrimage from Bakewell in her home county of Derbyshire to the city of Manchester. With the support of former Buddhist nun Laura Bridgeman en route, they made their way over the lush green, and often wet, hills of the Peak District National Park, sleeping in natural settings and trusting in human kindness and compassion along the way. These qualities were encountered in abundance as support came throughout the journey, which culminated with a well-attended talk on the pertinent theme of compassion at the Manchester Centre for Buddhist Meditation, where the pair were warmly welcomed by some of the samatha tradition's most committed long-term members. It was in the samatha tradition that Ajahn Brahm undertook his first meditation retreat in the early 1970s, so there was an added element of deep gratitude from Ven. Canda for linking up with connections begun long ago. Not only did the talk result in much lively discussion, but three new volunteers came forward to contribute their energy and skills to the project.

The planned monastery’s eventual location in the UK will very much depend on wherever there is the most interest and support. In that sense, Anukampa Bhikkhuni Project is in the hands of supporters as much as those of the organizers. By law, the organizations needs to raise £5,000 before it can register as a charity, and through the upcoming tour by Ajahn Brahm, Anukampa hopes to move closer to that goal. As this is such a rare and precious opportunity to have Ajahn in the UK for public talks and retreats, an eventful schedule has been planned for his visit, including talks on the themes of forgiveness, contentment and letting go, spiritual friendship and community, befriending inner fear, and dying and rebirth. There will also be two two-day retreats in central and West London.

Those wishing to benefit from the teachings and help bring the bhikkhuni sangha to England are encouraged to visit our website below. You are also invited to follow Anukampa Bhikkhuni Project's progress and activities on Facebook.

May all beings find freedom from suffering and unshakable inner peace!