A stack of ancient manuscripts from northern Thailand. From lannamanuscripts.net

The University of Pennsylvania and the National Library of Laos have jointly launched the Digital Library of Northern Thai Manuscripts (DLNTM), an ambitious project to preserve the unique cultural and literary traditions of the historical kingdoms of northern Thailand by compiling and digitizing thousands of ancient manuscripts and making them freely available as an online resource. The manuscripts, some of which are more than 500 years old, document various aspects of northern Thailand’s religious, cultural, and literary traditions, which significantly contributed to development of cultures throughout the region.

The DLNTM project, which began in 2013, brings together images of close to 5,000 manuscripts, most of which are written on palm leaf and have been stored in the libraries of Buddhist monasteries and in private collections. The rich collection of manuscripts includes texts from the Theravada Buddhist tradition, as well as works relating to social relations, law, astrology, magic, mythology and rituals, grammar and lexicography, poetry, and epic stories and folk tales. With more material still to be added, it is expected that the database will eventually contain more than 7,000 ancient documents.

Prof. Justin McDaniel, chair of the Department of Religious Studies at the University of Pennsylvania, is the principle investigator for the DLNTM project, working with the National Library of Laos team in Thailand led by Harald Hundius, David Wharton, and Bounleut Thammachak. McDaniel has spent much of his career reading, translating, and helping to preserve manuscripts from monastic libraries in rural areas of Thailand and Laos.

“This is a huge project to preserve, make accessible, catalogue, and scan the entire corpus of Northern Thai manuscripts. Anyone from students and researchers to monks and nuns can now read this preserved literature of an entire people,” said McDaniel. “It’s mostly Buddhist material, but also scientific material, historical material, botany, astrology, grammar, folk tales, philosophical tales, a massive corpus going back from 1410 to the 1950s when print became more popular.” (Phys.org) 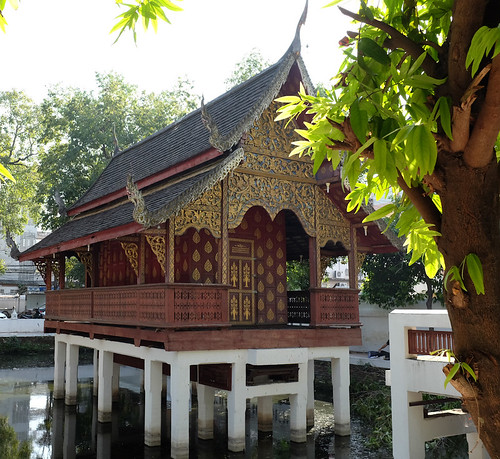 The DLNTM includes manuscripts compiled by earlier documentary initiatives. The bulk of the digital library—120,625 images digitized from grey-tone microfilms of 2,768 manuscripts—comes from the Preservation of Northern Thai Manuscripts Project (PNTMP), which focused on indigenous (Southeast Asian) and secular traditions, and contains possibly the oldest dated Pali manuscripts in Southeast Asia. The PNTMP was initiated by Hundius and implemented by Chiang Mai University’s Center for the Promotion of Arts and Culture from 1987–91. Building on the work of the PNTMP, the Digital Library of Northern Thai Manuscripts has itself assembled a collection of 15,212 color images of 334 manuscripts from eight temples, directly digitized by a team in northern Thailand.

The Dokumentarische Erfassung Literarischer Materialien in den Nordprovinzen Thailands (DELMN), conducted by Hundius from 1971–74, was the first comprehensive survey of Lan Na language manuscripts in the eight northernmost provinces of Thailand, assembling a collection of 13,413 grey-tone images of 992 manuscripts. Finally, the Harald Hundius Handwritten Collection (HHHWC) comprises 21,222 images of 181 manuscripts and manuscript texts copied into notebooks by local scribes—monks selected from temples in Thailand’s Lamphun Province—in the early 1970s, during the course of the DELMN project.

“We are hoping to do more digitization,” said DLNTM technical director David Wharton. “The temples have been taking very good care of their manuscripts. There have been some losses in these temples, such as being borrowed but never returned, or damaged by termites or fires. Digitization is to make them widely accessible and studied by the public.” (Bangkok Post)

The texts are in the Northern Thai (Lan Na), Tai Khuen, Tai Lue, Lao, Shan, Burmese, and Pali languages, and are written in a variety of scripts. The oldest are monolingual Pali manuscripts dating from the late 15th century, when Chiang Mai was a regional center for the study and dissemination of Buddhist literature. The earliest of these, the Timsati-nipata section of the Jataka Atthakatha Vannana, was copied in 1471. The manuscripts were primarily stored in temples, including the library of Wat Sung Men in Phrae Province, which alone contains more than 1,700 manuscripts that were microfilmed as part of the PNTMP and are now available in the digital library. These manuscripts were composed in the early 19th century when Khruba Kancana, a charismatic scholar monk, developed the temple as a center of Pali and Buddhist studies.

Hundius, professor emeritus of Thai and Lao languages and literatures at the University of Passau, Germany, is the local project leader. First arriving in Thailand in 1971 on a grant from the German Research Foundation to study manuscripts, he learned the local Lan Na language over a three-year period. “I still remember the sight of 15 northern people sitting at Wat San Rim Ping, unwrapping manuscripts, reading for each other and laughing,” Hundius recalled. “I was curious and tried to read the story. Finally, I understood the story after half a year. The script was very difficult. I wanted to study more and more.” (Digital Journal) 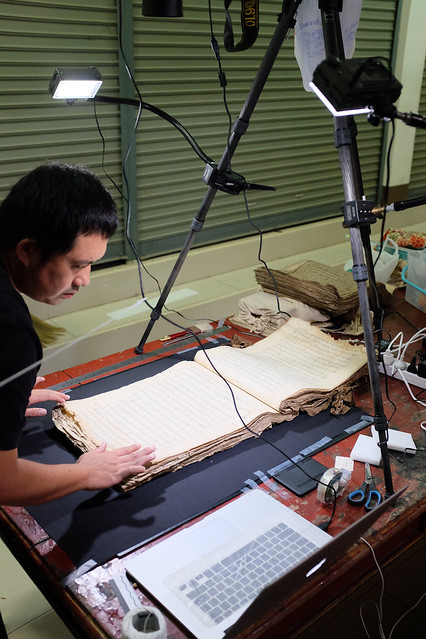 Digitizing a manuscript. From lannamanuscripts.net