Buddhist Tourism in West Bengal and Bangladesh: An Untapped Resource Brick stupa with Buddhist carvings discovered in 2012 at Moghalmari. From archaeologynewsnetwork.blogspot.hk

Before the convulsions of postcolonial statemaking, what is now the People’s Republic of Bangladesh and West Bengal (a state of what is today India) once formed an undivided eastern portion of the Indian subcontinent. In Bangladesh, Buddhist heritage sites can be found at Paharpur in Naogaon District, Mahasthangarh in Bogra District, Mainamati in Comilla District, and Bikrampur in Dhaka District. Old Bengal was a rich cultural and Buddhist region, the mother to medieval Buddhist master Atisha (982–1054) as well as seminal poet Rabindranath Tagore (1861–1941). Today, archeologists and scholars alike are drawn to the many Buddhist sites that dot the landscape.

However, until recently, tourism bureaus in both regions paid little attention to the possibility of promoting full-fledged, sustainable tourism as not only a means to spread awareness about the heritage of old Bengal, but as a means to connect India with Bangladesh. This connection might pay dividends for future channels of cross-border activity, including manufacturing, tourism, tea, real estate, healthcare, education, and IT. Speaking on the importance of Buddhist tourism, West Bengal Tourism Minister Gautam Deb said: “Buddhist tourism circuits will draw people from Nepal, Bhutan, and . . . South East Asian countries.” (Moneycontrol.com) Travel records from Chinese pilgrims like Xuanzang in the 7th Century provided clues pointing archaeologists to lost Buddhist heritage sites. In 1879 and 1880, Sir Alexander Cunningham carried out archaeological expeditions in the Paharpur and Mahasthangarh districts of present-day Bangladesh. The teams unearthed in Paharpur ruins that matched in size and grandeur reports about the fabled Sompura Mahavihara, one of the biggest Buddhist monasteries on the subcontinent.

Scholars and archaeologists have built on Cunningham’s original work since. The first survey on archaeological studies in Bengal was conducted by the literary society, Bangiya Sahitya Parishad, in Calcutta from 1893–94. By 1905, the society had built up a large collection of sculptures, with the branches in Rangpur, Rajshahi, Dhaka, and Comilla, each having their own collection of sculptures. In 1914, the director of Dhaka Museum, Nalini Kanta Bhattasali, traveled extensively to places such as Mainamati and Vikrampur. Following his reports, a museum was established called Varendra Research Museum in 1919. It is now part of the University of Rajshahi in Bangladesh. Unfortunately, fieldwork and research at Bengal’s archaeological sites have been neglected due to the difficulty in accessing such remote locations from urban centres of the subcontinent, but mostly due to the 1947 partition of Bengal and the corresponding lack of government attention.

Since Bangladeshi independence in 1971, the government’s excavations have provided fresh insights into the mostly Buddhist archaeological sites, illuminating new aspects of Bangladesh’s cultural history. Some sites are considered particularly important, such as Sompura Mahavihara, Shalban Vihara, Mahasthangarh, Bhasu Vihara, and Halud Vihara. The most recently excavated site is the vihara in Bikrampu, Dhaka District. Sompura Mahavihara is located in Rajshahi District and was declared a UNESCO World Heritage Site in 1985. From the 9th–12th century, this mahavihara was so respected in Tibet that many Tibetan monks visited. The world-famous Buddhist scholar Atish Dipankar (982–1054) stayed there for many years.

An excavation ongoing since 2010 on the vihara in Bikrampur has unearthed more than 100 statues and sculptures. Recent research by archaeologists indicates that Atisha was indeed from this area. Based on recent findings, archaeologists have said that the site is also consists of a 1,300-year-old Buddhist city adjacent to Vajrayogini Village in Bikrampur, the traditional birthplace of Atisha. 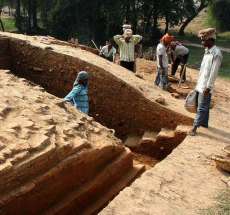 The Moghalmari Buddhist heritage site (also known as Dantapur Buddhist Monastery) is located on the left bank of Subarnarekha River, in the district of West Medinipur. The site covers an area of some 4,300 square yards and is considered the largest and oldest archaeological excavation in West Bengal. According to Sreecheta Mukherjee, editor of Chitrolekha International Magazine on Art and Design, the site was discovered in 1873 by British surveyors, and archaeologist and historian Nagendranath Vasu. The evidence gathered so far suggests that Moghalmari Monastery represents a significant chapter in India’s medieval history, while the valuable antiquities recovered from the site will help historians understand more about Bengal’s material culture.

Since February 2006, there has been another excavation at Tilpi and Dhosa in Kodalia District of West Bengal. The site consists of about 22 Buddhist stupas and an ancient furnace, in which blacksmiths would melt silver, copper, and iron, most likely to cast coins. This demonstrates that a Buddhist community, possibly including a mercantile laity, once flourished there.

Bangladesh and West Bengal now plan, separately, to develop a Buddhist circuit based on the sites in both regions. The Association for Conservation and Tourism (ACT), a voluntary organization in West Bengal, stated that demand had been increasing for years. Raj Bas Basu, head of ACT, said that there were many historic Buddhist places spread across Bangladesh. Several years ago, ACT took part in an initiative to mark West Bengal and Bangladesh on tourist maps to highlight their geographic importance.

“When the tourists of both Bengali regions will visit each other’s country, friendship and cultural exchange will increase. Not just the tourist area, but also the economic development of the entire region will flourish. In the next few years this tourism circuit will become very popular,” said  businessman Rafiqul Islam Chowdhury from Bangladesh. Chowdhury said the biggest obstacle to this objective was the visa situation, as there were no provisions for visas into either region of old Bengal. Tourism companies and traders needed to be allowed to offer visas specifically to that area, or otherwise issue convenient e-visas. (BBC Bangla)

Although there are few Buddhists in Bangladesh and West Bengal today, this should not stop rapport building between Buddhist and Muslim nations. In recent years, Pakistan has made numerous moves to reach out to Buddhist-influenced nations such as China, South Korea, Sri Lanka, and Thailand. Bangladesh has also tried to draw closer to Thailand. Both Bangladesh and West Bengal have remarkably close ties thanks to their inheritance of the South Asian Buddhist heritage. Sadly, this heritage has been forgotten, and it is high time that their Buddhist sites were given the attention and care they deserve. Somapura Mahavihara in Paharpur. From bbc.com