Today is the beginning of the Youth Climate Strike, which will feature events around the world over the next week and likely beyond. The idea now is simple enough: disrupt “business as usual” to make the people in power take the climate crisis seriously. For my own part, I will forego the usual article or interview and offer instead a “Climate Crisis Toolkit.” The toolkit comes, conveniently, from the wealth of Buddhist wisdom on the topic of climate change and global warming found here at Buddhistdoor Global (BDG).

I have included the year of publication for these references, as one thing we can observe is an increasing urgency in the tone and content of these articles over time. Read, ponder, and meditate on the teachings that elucidate the Buddha’s wisdom and that of great masters. The more deeply we understand these truths in our flesh, the more likely we are to follow their guidance on a day-to-day basis.

Then take action out in the world: consume less, organize more, protest, practice, strike, and sit; find and spread joy! These are tools that you can carry with you as you choose just how to be an agent of change for a more sustainable climate.

In 2013, we published a 2008 article by Samanera Joyadip in which he writes of the ecological crisis and of individual responsibility. His first point is that humanity and nature cannot be seen as apart from one another: “Nature is the first teacher of man. We cannot divorce man from nature and its surrounding living creatures. Therefore, we need to see ourselves not as isolated skinned and capsulated egos but as part of the larger body of the Earth.”* Joyadip’s somber conclusion is that human forces, especially those arising since the dawn of the industrial revolution, have separated us from nature in ways that are leading to its destruction, and ultimately our own as well. Buddhist teachings on cultivating ethical values such as loving-kindness toward all creatures, large and small, near and far, as well as the often-overlooked virtue of renunciation—living simply—can bring us back to a more sustainable relationship with the Earth.

In a 2011 article, BDG’s Wong Weng Hon authored a similarly hopeful piece, focusing on the celebration of Earth Day and extending it into a practice to be honored year round. Like Joyadip, Wong begins with non-duality as a basis for care for the Earth. He wisely focuses on the “fulfilling harmony and wholeness” that comes from this understanding, and cautions us to avoid being driven merely by fears of global warming, floods, wildfires, and so on: “Environmental concerns should be spiritual or divine in order to make right effort to protect and sustain the balance of the eco-systems.”**

Turning toward progress rather than potential catastrophe brings joy to our efforts and invites others to join us. This need not be a movement just for Buddhists, or even just for religiously minded people; it can involve all.

Also in 2011, BDG’s Senior Writer Raymond Lam gave us a more political perspective, writing of both the rising awareness of global warming and rising opposition on the part of climate skeptics “working to distort and misinterpret the data put forward by scientists to serve their own money-spinning, power-mongering interests.”*** Lam concludes that in this time of conflict, “Buddhists stand beside those who serve Gaia—be they environmentalists, conservationists, or faithful devotees who worship Mother Earth and the nature spirits of old.” It is necessary, indeed, to recognize the many forces at play in the conversation, the many then and now trying to spin or distort evidence, deny facts, and distract potential activists. 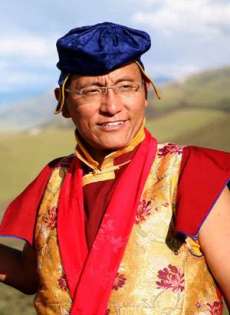 His Holiness the 12th Gyalwang Drukpa. From drukpa.org

Two articles highlight the power of travel for opening our imagination and connecting us with the Earth. Travel itself can be daunting in the face of climate change, especially air travel, but these two stories offer ways of conveyance free from that carbon karma. In the first voyage article, in 2013 Women in Buddhism columnist Caitlin Dwyer took us to the Himalayan mountains through the movie Pad Yatra: A Green Odyssey, documenting a 450-mile trek led by His Holiness the 12th Gyalwang Drukpa “to educate Himalayan residents on environmental practices.”***** The long journey, taken on foot, builds a sense of friendliness toward nature; as the Gyalwang Drukpa says in the film: “We live on nature. Therefore we have to pay a visit to nature and build a relationship with [it].” This is as opposed to a more abstract sense of connection with nature that might be developed through a merely conceptual understanding of our world and the problems it faces today.

In the second travel article, written in 2017, Heather Lyn Mann sails us into the pacific on her 15,000-nautical-mile ocean voyage powered by wind. As she put it, this was, “a once-in-a-lifetime chance to study the nature of reality in the wilderness of the Atlantic Ocean—the Great Atlantic Teacher."**** The perspective she gains is itself vast and welcoming. Like her teacher Thich Nhat Hanh, the result is a determined equanimity, pushing forward, but with composure, compassion, and poetry, thus offering an embodiment of the Buddha’s teachings. Turning to reflections on the climate crisis from earlier this year, Academic Reflections columnist V. R. Sasson discusses an experience she had in a classroom setting as a student offered what she calls a “capitalistic shoulder shrug” that can be found at the “heart of our current climate disaster.”****** She challenged the student, and in her writing about it, challenges the reader: “I felt an urgency in the classroom that day that I have never felt before. The purpose of an education system is to prepare young people for the world they will inherit. And right now, that means—to me at least—that we must awaken their sense of urgency, challenge old narratives that do not serve their future, and encourage new narratives that will bring life to a dying world. We need the courage to look at the suffering we are creating, because if we don’t, if we continue to look away, we will destroy ourselves.”

Finally, in August, Dharma teacher and Dharma Gossip columnist Anam Thubten Rinpoche brought us back to Raymond Lam’s political awareness, noting that: “The denial of climate change is not just one single view; it is a mindset that usually tends to deny other important issues, such as human rights, liberty, fairness, gender equality, and racial equality. The environmental movement is a major challenge to many who benefit from traditional power and economic structures. This is why it is still underemphasized and not sufficiently addressed in political as well as religious institutions.”*******

As the saying goes, “the map is not the path” and these tools alone will not build our sustainable future. However, we have here glimpses of the Buddhist justification for real concern for tackling the climate crisis. We also have clear direction for both individual efforts and attempts to see the problems at a broader, societal level. It is up to each of us as part of the greater system to actively be a part of the change we wish to see and to encourage leaders in whatever ways possible to take bold steps of their own. **** Fearlessness and Climate Change: A Better Way to Be in a Suffering World (Buddhistdoor Global)

***** Walking for Change on a Padyatra (Buddhistdoor Global)

****** Truth and Consequences: Capitalism, Climate Change, and the World We Created (Buddhistdoor Global)