Ven. Bhante Kondanna at the entrance to Staten Island Buddhist Vihara. Image courtesy of the author

Venerable Bhante Hennbunne Kondanna is the abbot of Staten Island Buddhist Vihara in New York City. He took novice ordination in Sri Lanka in 1968, completing his monastic training in Colombo and earning a BA in Buddhist Philosophy from the University of Kelaniya. After moving to the United States, he obtained a BS in Social Work from York College, CUNY, and a Masters in Social Work from Fordham University. A member and former president of the Buddhist Council of NYC, he is also a member of the Community Bridges organization, a representative of the New York Disaster Interfaith Services, and a member of the NYC Mayor’s Clergy Advisory Council. Heli Rantaniemi-David talks to him about his work for the vihara.

Heli Rantaniemi-David: Venerable Bhante Kondanna, what brought you from Sri Lanka to the United States?

Venerable Bhante Kondanna: I always went anywhere with the need of the people. It wasn’t my desire to come here. But in 1980, my teacher had come to New York and opened the first New York Buddhist vihara. Some of my “Dhamma brothers” were sent to New York, but I knew that I had to stay behind in the temple in Sri Lanka to do all the social services we needed to do and help my teacher. Then, in 1984, I had a chance to come to the United States at the invitation of a senior monk in New York, and my teacher agreed that I would go. But before I could settle in New York City, first I was asked to take care of the Los Angeles vihara. I ended up staying in Los Angeles for eight months.

HR-D: Was the first New York Buddhist vihara the present one in Staten Island?

VBK: Initially, the Sri Lankan temple was in Kew Gardens, Queens, and we still have a temple in Queens. But then someone in the Sri Lankan community in Staten Island helped to find this house. An old lady who had lived in it had passed away, and her children wanted to sell it. As soon as we saw the house and the land around it, we really liked it and thought that with some changes it would serve our purposes as a temple. A family in the community helped to sponsor [the purchase]. That was in 1999. The house was old and needed a lot of work—in fact, we had to demolish most of it and rebuild everything. Now it is beautiful, very practical, and we can all enjoy it. In front of the shrine at Staten Island Buddhist Vihara. Image courtesy of the author

HR-D: Do Sri Lankans from other boroughs and communities now come to Staten Island regularly?

VBK: We have many programs here, especially on the weekends, such as children’s Sunday school, but I still have to travel in order to reach other communities too. Many communities in Queens, New Jersey, Connecticut, or Massachusetts are so far away that it is challenging and expensive for people to travel here on a regular basis, but still the communities always need support. So, one day, I had an idea. I told my community members that if someone gives the temple a car, I could drive to different places to give my support and classes. They listened and not long after, someone donated an old car. Ever since, even though we have this Staten Island Buddhist Vihara as the main temple, I have been traveling to give classes, help other communities, and even to train monks in other temples to take more charge of things. People saw that when the children and parents were getting together and learning something spiritual, they felt very happy. It took some effort from many people in each community to get organized and form the groups, but in this way we have been able to provide the important teachings to the children and families. It was quite difficult in the very beginning.

HR-D: You are also a mentor for the younger generations—for first-generation American Sri Lankans.

VBK: Yes, because it is very important that we can bring the people back [to the vihara] even when they are attending high school or college, or are young working adults. I have been watching them now for nearly 30 years. Many of them are gone and don’t come to the temple anymore, but often they still consider themselves Buddhists. Maybe their parents were born in Sri Lanka and they were born in the United States, so sometimes they don’t know who they really are. I [felt that I] must provide them with the opportunities to discuss these things with their friends and peers who have similar backgrounds. It’s hard for me to imagine what it is like to be in their shoes, so I needed to find out their concerns and questions. Since I had observed [this situation] for a long time, I wanted to do something about it. 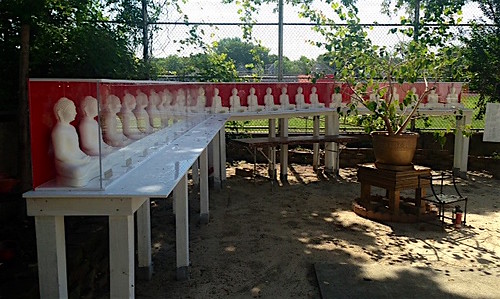 In the backyard at Staten Island Buddhist Vihara. Image courtesy of the author

HR-D: How did you go about it?

VBK: I had collected all these email addresses over the years, so I decided to write to them saying, “Hey, it’s time to come back. Let’s have a meeting. If there’s anything wrong, let me know. I’ll be watching, observing you having a meeting, not speaking, but listening. But in case you need my help, I’m there to support you. If you think it’s important for you guys, start meeting each other regularly.” I told them that the reason for the meeting is that they have to find out for themselves who they want to be; to find out what they want to do about it. In the first meeting we had 4 people, second, 17, and in the third meeting I had 19 people. I learn a lot about them during these discussions. They are the commanders of the group, but if it’s going in the wrong direction, I will help to steer it around.

HR-D: How about community projects? Do the young people get involved?

VBK: They wanted to do an event, so I told them that in July we would have completed 16 years at the Staten Island vihara and that perhaps they could do something about it—and they did. We had a celebration in August that was attended by hundreds of people: adults, children, and teenagers. This was organized by Sri Lankan teenagers and young adults who were born in the United States. It is important that they learn to know each other and feel part of the community. We must support them, and the parents should support their efforts. I’m very happy about all these young Sri Lankan groups and community projects. I hope that, in the end, many good things will come out of them and they will have a better sense of who they are and can feel part of the community. 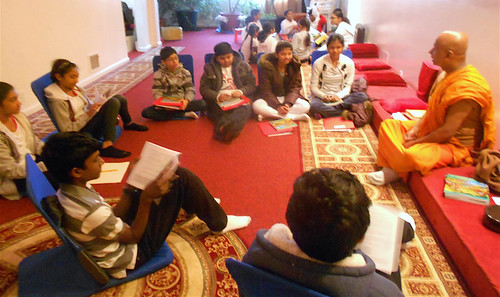 Teaching at the Sunday school. From sibv.org

HR-D: Talking about communities, you are a community builder in various Sri Lankan communities around the country, but also among various religious and non-religious communities in New York City.

VBK: Yes, it’s very important that people from different religious backgrounds get together. Our temple, from the very beginning, has been welcoming people from different backgrounds. They don’t have to be Buddhist or Sri Lankan. Any friends who need service, they can come to us. Staten Island Buddhist Vihara is a member of the “Building Bridges” community of various different religions. We build friendships among the leaders of many other religious communities within New York. This way we can learn what is happening in different neighborhoods and how we can be of help. We learn so much from each other. We need each other. During the 2004 Tsunami disaster, so many New Yorkers helped with contributions, and our community is very grateful for that. Also, we are happy that we were able to help New Yorkers during the 9/11 tragedy.

HR-D: Returning to the vihara itself, in the Sunday school on the weekends, do you also teach some Pali? Do you recommend that children memorize prayers in Pali?

VBK: Oh yes—the children are doing it now. It’s a good thing and they are happy afterwards. I didn’t push them to learn, because when we meet only once a week or once every two weeks, it’s not enough. If they really want to learn Pali and the prayers, they need the support from home. It’s a good idea, if possible, to sit down and do their part with the parents or even grandparents at home. We need to show the value and beauty of that language. I also teach that Pali was the language of the Buddha. If you want to learn the teachings of the Buddha, you can learn a little bit of the language and then maybe enjoy the chanting in that language even more. But I don’t push them too much. A little bit at a time. 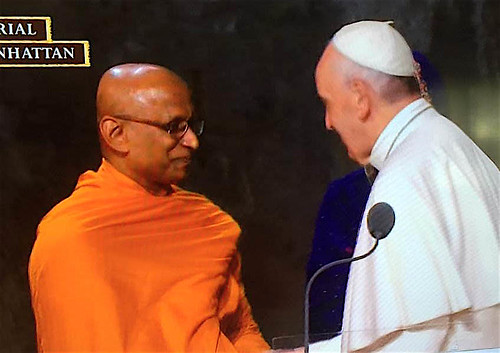 With the Pope. From sibv.org

HR-D: What else do you teach them?

VBK: The one thing that I ask them do regularly is meditation. I encourage them to do the Metta—loving-kindness—meditation every single day. We are making progress.

VBK: When people are doing well, they forget about spirituality. But even if materially we are doing well at this moment, we should not forget about the spiritual side. We need to keep a balance. So, I always teach—as Buddha taught—these four things: Metta–Loving-kindness, Karuna–Compassion, Mudita–Sympathetic Joy, and Upekha–Equanimity.

We should be happy to see the success of other people, too, just as if good things happened to you yourself. Life does not go in just one direction—there are always ups and downs. We must be able to handle all situations. That’s why I emphasize these four qualities of life, the four sublime states of living teachings. I ask everyone to genuinely get these teachings into their hearts and practice them. One day we will look back at how we lived our lives. Don’t do anything that you would regret doing later; do something that you can smile about. So that you may say: “Oh, I’m so happy about how my life turned out.” I teach this to both the children and the adults.

Also, meditation is very important, and that is something that we should do every day. The best way to do it is in the morning. I start my own day by first having a shower, then a glass of water. After that I go downstairs to meditate and do my chanting. Only after all that I will have my breakfast and start doing other things. If first thing in the morning you start checking your emails and stuff like that, just sitting in front of your computer, you will never meditate! 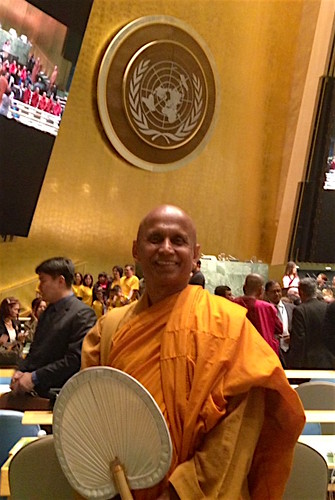 Ven. Bhante Kondanna at the United Nations on
Vesak Day. Image courtesy of the author

Author’s note: After I interviewed Bhante Kondanna, he went to participate in a 9/11 multi-religious prayer service during the Pope’s visit to New York. Kondanna said that Pope Francis gives the city “a working definition” of how spiritual people from different faiths can stand together. Also, he believes that clear words can clean hearts and that when all of us are clear about who we are, it brings us spiritual benefits. (A Journey through NYC Religions)