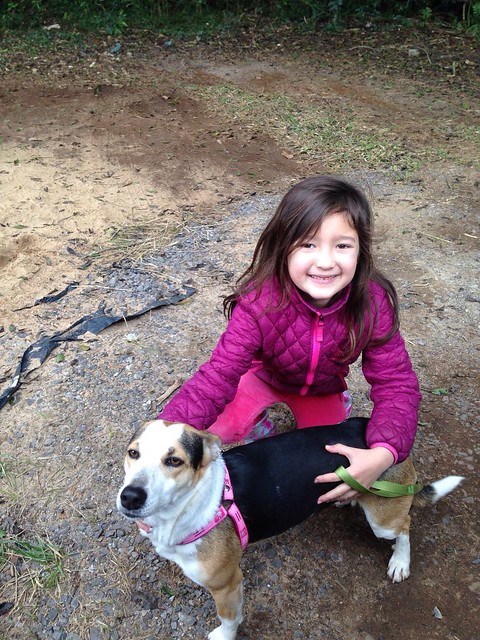 Amaya and Fiona. Image courtesy of the author

I often think about what I most wish for my children in this life. As a mother who tries to follow the Buddha’s teachings, I find myself wishing that my children be kind and that their kindness will grow continuously. When I see my daughters fighting over something or not playing nicely with others, I feel concern and I find myself asking them again and again: how would you like to be treated?

When we put kindness first, so many other bad habits fall away. Kindness requires that we be mindful and move away from selfishness. Interestingly, I feel that having childhood pets helps to support the wish to cultivate kindhearted behavior, of course while also educating our children about how to care well for animals.

Amaya has adopted three full-grown stray dogs, which at times has revealed my own lack of kindness when I feel irritated by the inconvenience that they manifest. But her wish to help them was so sincere that I ignored my rational side and we took them in. I wanted to support her natural good intention to help another being and also not teach her that kindness is somehow inconvenient or unworkable. So now our front veranda seems to have become a collection point for dog fur and there has been a lot of full-moon howling. Yet both Amaya and her sister love the dogs and help care for them.

For a while we actually had four dogs at our home, but my elderly poodle passed away at the beginning of the year. Illness from ticks made him very weak during the last weeks of his life and he required palliative care. Both of my daughters were gentle with him and tried to help him in their own ways. The day that he passed away I found myself explaining death to Leela as she sat crossed legged in my lap after we had recited prayers for him. It was difficult for her to understand, though. 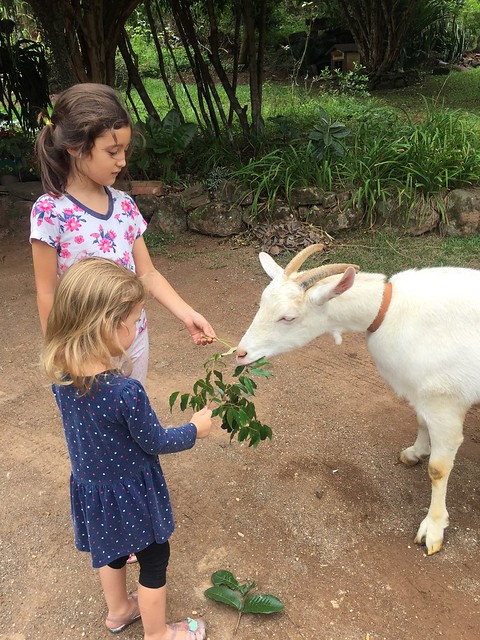 When Amaya heard the news she cried, saying: “I must go offer butter lamps so that he has good owners in the next life, or good parents.” The good owner part made me want to laugh, but she was so serious about it that I didn’t want to offend her. “He doesn’t have to be a dog,” I noted. “Let’s hope he has a precious human birth next.” She then gathered some of her own belongings as an offering to request prayers from the Rinpoche who was visiting Khadro Ling at that time. It was really touching that, though emotional about the loss, Amaya was proactive in wanting to help his passage.

Besides having pets, we also visit a local farm frequently and Amaya says mantras to the cows and pats them. The girls love visiting the farm and seeing the different animals. It is a small farm so Amaya knows most of them by name. The old farmer has even taught Amaya how to milk the cows, which brings me to the very difficult topic of raising Buddhist children and eating meat.

When Amaya was born my husband and I considered raising her vegetarian, inspired by other Buddhist families. By the age of three she had still not eaten meat and we went on a family vacation to visit her uncle in the northeast of Brazil. While taking lunch at a colonial restaurant, a large plate of sundried beef was placed on our table—a specialty of that region. Amaya took a piece and began to gnaw on it. I tried to take the piece away and she jumped from the table, clutching on, clearly wanting to keep her dried meat. She seemed ravenous for meat even though she had not tasted it before. I felt, somehow, that she really needed the nutrition and we decided to broach the possibility of vegetarianism at a later time.

Since then she has faced the painful moment of realizing that meat comes from ending the life of an animal. The first time Amaya made the connection that meat comes from a living being was after watching a video of dolphins performing and being given a small fish to eat as reward. Soon afterwards, we were on a flight together and one of the meal options was salmon. Amaya stared at my plate and asked, “Did a fish have to die for you to have this food?” She was heartbroken and asked me how I could eat it. Visiting the local farm with Amaya. Image courtesy of the author

I knew it was time to explain that all meats come from animals—beef from cows and so on; she was four years old and became very pensive. Amaya asked: “Why can’t we only eat the meat of animals that have died on their own?” (meaning from natural causes.) If only it were that simple, I thought.

I tried to explain that if we choose to eat meat, we must try to remember to dedicate merit to the animal as much as possible, while also being mindful to avoid excess in our consumption. We also talked about how many other beings also die in the cultivation of vegetables. Helping our children to be conscious of where their food comes from and also where clothing and other resources come from, seems helpful for raising a more conscientious and kind person who doesn’t grow up thinking that all these goods somehow magically originate in the supermarket.

Although, my daughters are not vegetarians, we plan so that meat isn’t the basis of every meal and observe special holy dates. It’s a really difficult topic, even though there are many Buddhists who choose to eat meat and have a clear understanding of why or why not to do so. In raising children, we want them to be both compassionate and to receive the nutrition that they need to be healthy. I rejoice so much when I hear about families who our able to manage a healthy vegetarian diet. Observing my girls, that just didn’t seem like a possibility, yet it’s something that I hope they will have the foundation to come to on their own as they grow and make their own choices.