Duality, Dharma, and the Brain Duality comes up often in Buddhism and the discourses of other Dharmic and wisdom traditions. This is probably because duality is intrinsic to the physiology of the human brain, which has two hemispheres, and the resulting impact on the physiology of human cognition, which itself gives rise to our understanding of the world and our experience of reality—a central topic in the ancient wisdom traditions.

Nowadays, thanks to novel insights from neuroscience and medicine, we can compare what we know about duality from ancient wisdom traditions with what we are learning using modern equipment and contemporary scientific methods.

One can look up the Sanskrit terms dvaita and advaita, for example, or ask scholars about duality and expect a multiplicity of texts, points of view, and authoritative sources, as well as Sanskrit nomenclature and ongoing debates. 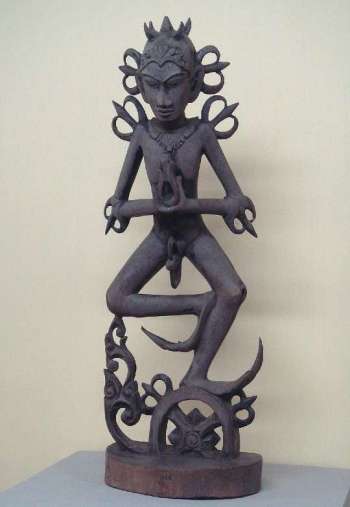 Achintya at the Bali Museum. From wikipedia.org

There is also qualified non-dualism (vishishtadvaita), which—mixed with other concepts and interpretations related to duality—makes this a dense and complex topic.

Dualism is also relevant to Buddhist thought insofar as Buddhists seek mainly to transcend it. According to Bhikkhu Bodhi: “Theravada Buddhism is neither dualistic nor nondualistic. ‘In contrast to the non-dualistic systems, the Buddha’s approach does not aim at the discovery of a unifying principle behind or beneath our experience of the world,’ he wrote. The Buddha’s teaching is pragmatic and not based on some grand, speculative philosophical theory.” (Learn Religions)

It can also be said that Buddhism according to the Theravada tradition rests more on a dual view while the Mahayana proposes that everything exists in both an absolute and relative or conventional way. Readers may have heard of the notion of “two truths”—ultimate and relative—referenced in the Buddhist teachings. In the absolute level of truth, all phenomena are considered as one, but at the relative level, phenomena can be distinguished as separate.

Similarly, in Daoism the yin and yang represent two distinct aspects of universal existence and are considered complementary parts of the whole, which is constantly transforming.

Fundamentally, while different schools of Buddhism approach duality in different ways, it can be said that all teachings and practices aim to transcend duality in favor of more integrated views and experiences. Most meditation and yoga practices are aimed at overcoming duality to facilitate the unity of experiences and views.

All distinctions are ultimately the product of dualistic views and may be the result of the fact that the human brain is made up of two lobes that are connected by the corpus callosum—the role and function of which is still being researched. In contemporary science, duality is studied in philosophy, psychology, and neuroscience, and it is considered a principal component of the brain’s organization.

According to a dynamic model of double consciousness in vertebrate brain organization, evolution may explain why although each of the two cerebral hemispheres benefits from sensory input from the other for representation of the ipsilateral half of corporeal and extracorporeal space, its conscious experiences are limited by the perception constrained by lateralization, as demonstrated in experiments in cross-cueing.**

The phenomenon called the interhemispheric duplication effect for sensory representation has been known for years but hitherto considered mysterious, or it has been ignored on the grounds that integration must be achieved at a higher level of processing. When it comes to understanding duality based on a neurological worldview, there is a “normal” natural duality in “healthy’’ humans determined by the physiology of the brain, as well as the duality arising from pathologies, mostly related to function in the corpus callosum.***

A condition known as split-brain syndrome affects patients who have had their corpus callosum—the bundle of fibers connecting the two hemispheres—severed, a procedure performed in most cases to treat severe epilepsy.****

According to some research, the function of the corpus callosum is not to integrate and unify conscious experience between the hemispheres but to duplicate it in accord with the model of mental duality.*****

Philosophers have drawn our attention to the idea of the unity of consciousness, most notably the German thinker Franz Brentano (1838–1917).****** The gist of Brentano’s theory of consciousness is the claim of the “double relation of the mental”—meaning that every mental phenomenon involves an intentional relation to something distinct from itself, and an intentional relation to itself. (Springer)

That leads into considering the impact of duality and unity wth regard to other concepts, such as the unity of phenomena and unity of science, topics for future consideration.

In conclusion, the ability to integrate worldviews and to perceive the unity of phenomena is fundamental to the ability of humans to function and to be articulate. It is also fundamental to the experience of Buddhist wisdom paths such as Mahamudra, the basis for enlightenment and the core practice and goal of advanced Buddhism and yoga. 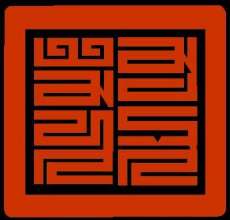 A seal design with the word Mahāmudrā ("great seal") in Mongolian 'Phags-pa script. From wikipedia.org 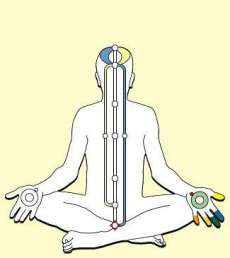 Exercises such as the yogic unification of ida and the pingala through breathing with alternate nostrils are aimed at supporting the transcendence of duality and developing the integration of physiological and mental functions.

At the same time, while living in a society where the majority of people are unlikely to have transcended duality, it may be useful for practitioners to keep in mind some basic yet firm level of dualistic distinction, such as respecting personal space and not violating other peoples’ boundaries just because now they perceive that “all is one.”

It would be interesting to explore whether meditative practices might impact the functioning of the corpus callosum, yet another topic for future consideration.

* What is the difference between Advaita, Dvaita, and Vishishtadvaita philosophies? (Das on the Street)