The Tosho-gu Shrine complex at the Unesco World Heritage site Shrines and Temples of Nikko. From roomsuggestion.com

Late last year, I was fortunate to have the opportunity to travel to Japan to participate in a conference at Tokyo University of Foreign Studies from 12–13 December entitled “The 4th International Congress of Bengal Studies.” While I had eagerly anticipated giving a presentation and taking part in the busy conference program with the other speakers and attendees, who included Bangladeshi, Indian, and Sri Lankan scholars, my visit also offered me the unexpected opportunity to enjoy some of the unique cultural aspects of Japan and Japanese Buddhism.

On the final day of the conference, I was invited to attend a Theravada Buddhist ceremony known as Sangha Dana—the offering of alms to monks by laypeople—organized by members of the Bangladeshi, Indian, and Nepali communities living in Tokyo. I was also delighted to meet a group of representatives from the Japanese Mahayana Buddhist organization Rissho Kosei Kai, who joined in the Theravada rituals, doing puja and offering incense and flowers to the Buddha with the Theravada laypeople. As a Bangladeshi monk attending the ceremony alongside five Thai monks, I had a warm feeling of inclusiveness as Buddhists of five countries came together to make merit, with no regard paid to differences in culture, race, or Buddhist tradition.

After the ceremony, I made the acquaintance of Dipan Barua, a lay Buddhist from Assam, India, working in Japan, who invited me to accompany him to visit Ushiku Daibutsu, a Buddha statue in the city of Ushiku, Ibaraki Prefecture, the following day.

Completed in 1993, the 120-meter (394-foot) Ushiku Daibutsu was built to commemorate the birth of the Japanese Buddhist monk Shinran (1173–1263), the founder of the Jodo Shinshu—also known as Shin—tradition of Japanese Buddhism, a school of Pure Land. The statue stands on a 10-meter- (33-foot-) high lotus platform supported by a 10-meter-high base, which together weigh 4,003 tons. The statue was recognized by Guinness World Records as the tallest bronze Buddha statue in the world, a title that it held for some seven years after it was built. It still ranks among the top three today. 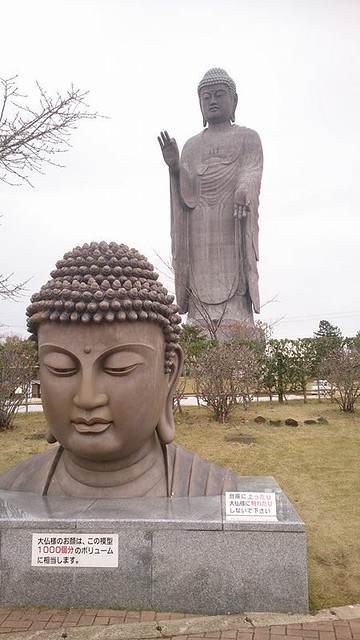 Entering the site, we encountered a pleasant garden bisected by a path leading from the main gate to the giant statue, which contains the main shrine hall. We stopped at a dedicated platform before the shrine to pay reverence to the Buddha before proceeding into the interior of the statue, which also houses a four-story museum. The first floor features a darkened chamber called the World of Infinite Light and Life, in which a single shaft of light illuminates a cauldron of burning incense. An elevator carried us up 85 meters (279 feet) to the fourth-floor observation level named after Mount Gridhra-kuta (Vulture Peak) in India, where the historical Buddha, Shakyamuni, taught. From this lofty vantage point, we were privileged to take in an expansive view of the adjacent flower gardens and the nearby town of Ushiku.

Descending to the third floor, the World of the Lotus Sanctuary, we encountered a representation of the Pure Land of Amitabha Buddha lined with 3,300 images of the Buddha. The second floor houses the World of Gratitude and Thankfulness, where people can copy the phrase "Namu Amida Butsu" ("I take Refuge in Amitabha Buddha") using traditional Japanese brush and ink. Exiting from the Buddha, we took another moment to purify our senses in the tranquillity of the garden, pausing to feed the rabbits and fish, before visiting the nearby cemetery.

Some days later, I traveled with two new friends, Nayon, originally from India, and Sujan, from Bangladesh, who were kind enough to take me to Nikko in Tochigi Prefecture. One of the coldest parts of the country during winter, the mountains of Nikko, a popular destination for skiers, also provided one of the most memorable and enjoyable experiences of my trip—the first time in my life that I have encountered snow!

Descending from the mountains, we stopped off to visit the Shrines and Temples of Nikko, a traditional Japanese religious center and a UNESCO World Heritage site comprised of 103 religious buildings. I was drawn to investigate several remarkable historic buildings within the complex, but since it was already late afternoon by the time we arrived at the main entrance and the site was about to close, we hurried to enter and pay our respects to the Buddha. 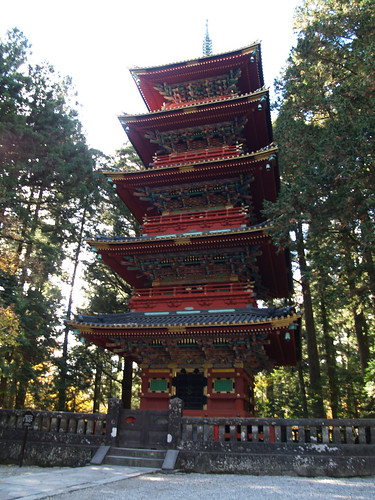 The entire complex is contained within two Shinto shrines (Futarasan-jinja and Tosho-gu) and a Buddhist temple (Rinno-ji), which are renowned in Japan and internationally as architectural masterpieces. Within the grounds we took in many stunning works of great artistic value, including Honden (the main building enshrining the three deities of Futarasan-jinja) and Shinkyo (a wooden arched bridge). The religious buildings at the site are artfully arranged on the mountain slopes, creating an environment of breathtaking beauty.

The temple, Rinno-ji, made up of 15 distinct structures, was established in 766 by the Buddhist monk Shodo Shonin (735­–817). The most famous building in the temple is the Sanbutsu-do (Three Buddha Hall), which houses three gilded wooden statues of Amida Nyorai (Amitabha Buddha), the thousand-armed Senju Kannon, and the horse-headed Bato Kannon.

All too soon it came time to leave. I remarked to my friends on how well maintained the site was and how pleasantly surprised I had been to see such a large number of visitors. Gazing back longingly at the Shrines and Temples of Nikko, I was moved to observe, “This is the first temple I have visited in Japan; I am so impressed! I’ve felt such an overwhelming sense of peace during this visit and will remember every moment.” As a disciple of the Buddha, I promised myself that the next time I had an opportunity to visit Japan, I would spend more time at this wonderful site to learn more of the beauty and subtleties of Japanese Buddhism.