This column “Dharma Project of the Month,” which started in January 2016, was intended primarily to showcase the many efforts of Buddhists—both monastics and laypeople—to address certain social issues, such as poverty, lack of education opportunities, access to medical care, gender discrimination, and environmental threats.

While based on the same sense of compassion and shared humanity, some of these projects may not be in the same league as the anti-war protests of Thich Nhat Hanh, Maha Ghosananda’s peace marches, the social activism of Sulak Sivaraksa, or Dr A. T. Ariyaratne’s village reawakening. Nonetheless, they are an essential part of the spectrum of engaged Buddhism, a term first coined by Thich Nhat Hanh,* who lobbied internationally for peace talks and brought the plight of the Vietnamese to the world’s attention in the 1960s.

On the sidelines of a conference in India to celebrate the 60th anniversary of Dr. B. R. (Babasaheb) Ambedkar’s conversion to Buddhism, I caught up with Professor Christopher Queen, one of the leading scholars on engaged Buddhism, to learn more about the movement.** 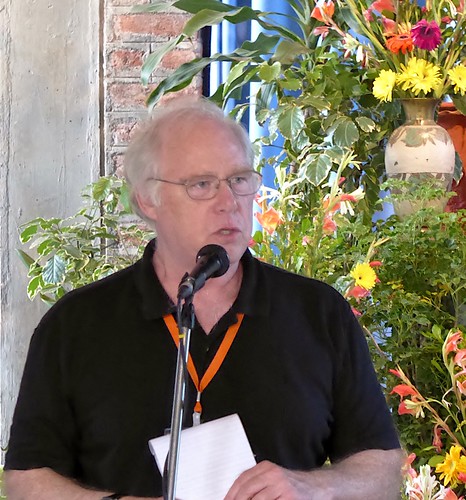 Buddhistdoor Global: The Buddha’s teachings have often been seen as a path of self-liberation, a way out of the suffering of samsara. Buddhist ethics are founded upon the dictum “do good, avoid evil, purify your mind.” Buddhists are taught that by observing a moral life and following the Noble Eightfold Path, one can eradicate the poisons of hatred, greed, and delusion, and overcome dukkha, or suffering, which is the first Noble Truth. So why is there a need for engaged Buddhism to address the woes of the world?

Christopher Queen: What we have in the modern world is a new paradigm of suffering, which traditional Buddhism seems quite inadequate to deal with. Suffering has been grossly multiplied by forces beyond an individual’s control—take for example the suffering that results from climate change, over-population, or food scarcity, or the suffering of millions of people in a country with a civil war that seems to go on and on. This kind of suffering cannot be overcome by simply practicing morality and purifying the mind. We are still going to suffer because we are victims of structural violence embedded in transnational corporations and governments. Greed, hatred, and delusion have become institutionalized, propped up by media propaganda, capitalism, and an insatiable appetite for material goods and pleasure, of which many of us are tacitly guilty. As Buddhists, we need to rethink our traditional response to deal with this kind of suffering. As Joanna Macy *** says, we need “new hands and minds, aware of the suffering caused by outmoded ways of thinking and dysfunctional power structures, to help turn the wheel.”

BDG: Is engaged Buddhism a new form of Buddhism?

CQ: Outdated teachings and ideas are like weeds that have to be pulled out. Take the metaphor of John Dewey’s weed garden. As we weed the garden, some of the old teachings are still flowering like perennials. But if we keep pulling out the weeds, the perennials are fewer and fewer. Pretty soon, our garden will become bare. So, we need to plant new strains to replenish the garden. Similarly, we need to keep planting new ideas. Rather than a new form of Buddhism, I would say engaged Buddhism reflects a change in Buddhist social awareness, and the evolution of Buddhism in response to a new culture that is no longer limited by geographical boundaries. We need to see which part of the Buddha’s teachings will help us to deal with today’s problems. We need a “yana”**** that the Buddha would embrace if he were alive today.

BDG: Does this not dilute the essence of the Buddha’s teachings in any way?

CQ: One of the key Buddhist tenets is that of anicca (Pali; change, impermanence) which is the first mark of existence. Understanding anicca opens room for new notions of what Buddhism can be, of how it can be shaped in a way that is relevant and fruitful. It is this fluidity of Buddhism, the ability to adapt to the local culture and thoughts of a place, that makes it universal and sustainable. There is no Buddhism with a big “B,” only buddhisms.

BDG: There are those who contend that emphasizing the importance of social engagement is a distraction from the path of mindfulness and renunciation that Buddhist meditation encourages. How do we reconcile social engagement and our spiritual practice?

CQ: Engaged Buddhism is founded on the belief that genuine spiritual practice requires active involvement in society. The Buddhist doctrine of paticca samuppada, or dependent origination, stresses that we are all living in an intricate web of interconnectivity and interdependence. Everything we do impinges on all others, be it in the way we commute, the products we buy, the waste we produce, or even how we vote. This realization brings us into a responsible and resilient relationship with the world around us. In fact, whether we are in a protest against a nuclear plant or helping out in a soup kitchen, there are ample opportunities to hone our spiritual practice, to develop attitudes of non-violence, tolerance, compassion, selflessness, wisdom, and a genuine concern for the welfare of all.

The quality of loving-kindness that comes from meditation is important if we are to sustain our efforts in the long term. You start from caring for yourself, then for those around you, your family, your neighbors, and those in your community. Of the Four Brahma-viharas (sublime states or immeasurables), mudita, which is often translated as “empathetic joy,” is understated. On a deeper level, mudita is being attuned to one’s own needs as well as those of others. We rejoice when we see the happiness of others, but we rejoice in our own wellbeing as well. How can we feel joy for another person when we do not feel joy for ourselves? For example, at age 71, I need a nap after lunch. I do this because I need to take care of myself. When I have to teach a class afterward, I can stay focused and attend to the others. The late Ananda Maitrieya Balangoda***** said that you can’t love somebody else until you love yourself.

BDG: What does engaged Buddhism entail in practice?

CQ: We start by acknowledging the social suffering going on. Then we have to act, to educate, agitate, and organize. We need to form a counterculture that includes activism and service; we have to help each other because we are all victims of these great forces. We have to take to the streets in non-violent protests, to boycott, to write letters. This is what [Dr.] Ambedkar did for millions of Dalits in India who have been oppressed by the caste system. He wrote and spoke about it, and organized movements and parties to fight these collective forces of the evils of caste.

BDG: There has been an alarming rise in Buddhist nationalism in some traditionally Buddhist countries in recent years. Is this a form of engaged Buddhism?

CQ: We have to be very careful here. Buddhist militancy and religious fundamentalism are no different from the religious theocracy in Pakistan or Iran, or for that matter, ancient Tibet. We are at a major turning point in the history of Buddhism in Theravada countries such as Sri Lanka and Myanmar. It is unfortunate and even shameful that many Buddhists are keeping silent in the face of Buddhist terror. What is the face of engaged Buddhism? An enraged monk with fists in the air or one leading a silent peace march? Social engagement cannot be fueled by egocentrism, self-righteousness, rage, or aggression. Let us remember Dr. Ambedkar’s final advice: “The battle is in the fullest sense spiritual. There is nothing material or social in it. For ours is a battle not for wealth or for power. It is a battle for freedom. It is a battle for the reclamation of the human personality.”******

** Professor Christopher S. Queen teaches Buddhism and World Religions at Harvard University. He has authored and edited many works on Buddhism, including Engaged Buddhism: Buddhist Liberation Movements in Asia. He is also the convener and honorary chairman of the Journal of Buddhist Ethics’ online conference on “Socially Engaged Buddhism.”

*** Joanna Macy is an environmental activist and author, and a scholar of Buddhism, general systems theory, and deep ecology.

**** Pali and Sanskrit; a vehicle or method of practice.