The organization I direct, Core of Culture, which had already worked with Tantric Buddhist monks in other parts of the Himalayas, was invited to undertake the task of surveying, documenting, and strengthening Bhutan’s Buddhist dance culture in 2003, during the last five years of absolute monarchy that ended in 2008. During four years of fieldwork, we visited 17 Cham festivals across the breadth of Bhutan, viewed scores of murals and other paintings depicting dance, and were privileged to see secret Cham dances never before witnessed by Western eyes. What we saw and learned expanded our knowledge of dance itself, revealing powers and purposes beyond our existing notions of dance. 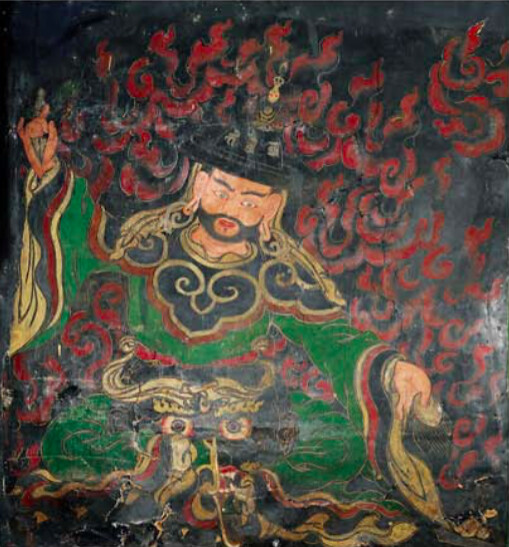 Without the art, our understanding of Cham would be much diminished and the philosophy of Tantric Buddhism, of which the Cham dances are a quintessential manifestation, would seem much more abstruse. It became increasingly clear that dance, art, and philosophy are inseparable: that “still art” and “moving art” together form the inherited means of expressing the practice of Buddhism.

Although calling Cham “sacred Buddhist dance” is almost inevitable, as English has only one word for dance, it makes about as much sense as calling yoga “mindful Hindu calisthenics.” Properly, Cham is a form of danced yoga, which here means a meditation technique unique to Tantric, or Vajrayana Buddhism. According to the traditional understanding, which corresponds to the use of the word “Cham,” it originated in Tibet in the 8th century when mahasiddha (great adept) Padmasambhava from the Swat Valley (in present-day northwest Pakistan), who brought Tantric Buddhism to Tibet, subjugated local deities obstructing the building of the first Tibetan Buddhist monastery, Samye, near Lhasa. Cham is the “deity action” of the primordial deities.

Since then, Cham has become part of the lineages of Vajrayana. Performed at large public ceremonies, in private rituals, and in secret mystical rites, it can be understood as a combination of dance and meditation, but is in fact more a danced meditation than a meditative dance. As a tantric yoga, Cham is an integral part of Tantric Buddhist practice.

Among the commonly depicted subjects of Vajrayana Buddhist art that are always shown dancing are female energies, called in Sanskrit dakinis and in Tibetan ging, who join stags, skeletons, Black Hat sorcerers, and wrathful deities. Dancing is how they move, how they are seen. The mural shown here is a depiction of the Zhabdrung Ngawang Namgyal (1594–1651), the founder of “modern” Bhutan, together with his umdze (chant master), Desi Umdze Chenpo Tenzin Drugek (1591–1656), and his ngey ney (personal chamberlain and ritual acolyte), Drungwa Damcho Gylatsen. (Fig. 1) They are performing a Black Hat sorcerer’s dance. The mural is in the goenkhang (the shrine room dedicated to the most ferocious protector deities, normally off-limits to women and foreigners) of the fortress-monastery Wangdu Phodrang Dzong, built in 1638 and situated in the Wangdu Phodrang district of western Bhutan. Fig. 4. Wangdu Phodrang Dzong before the fire in 2012. Photo by Walt Galmarini

Nevertheless, we were given royal permission to photograph the mural, which was completed before 1640, and to publish the images. These excellent documentary photographs were taken by Honolulu Museum of Art photographer Shuzo Uemoto in 2007. One figure in the mural was published in the 1970s by Michael Aris, but mis-identified. However, iconography is not key to this painting—the lore of mystical dance is. All interpretation suffered a tragic blow in the Wangdu Phodrang fire of 14 June 2012 that destroyed the dzong and the amazing 638-year-old mural housed within. The reconstruction has begun from the ground up, and when the time comes for the restoration of artworks, Suzo Uemoto’s rare photographs will serve the future. A first look at the mural from Wangdu Phodrang Dzong hardly suggests “the most ferocious protective deities,” except for the aprons of the robes, which show the face of Mahakala. On the other hand, it does immediately show the importance of dance to the ruler of Bhutan, the Zhabdrung, who performed Cham regularly as part of his own training as a naljorpa, or yogic adept skilled in the practice of magic. The Zhandrung was a practicing sorcerer until the age of 40. He created new Cham, commissioned Cham, and employed it everywhere, from affairs of state to military campaigns. 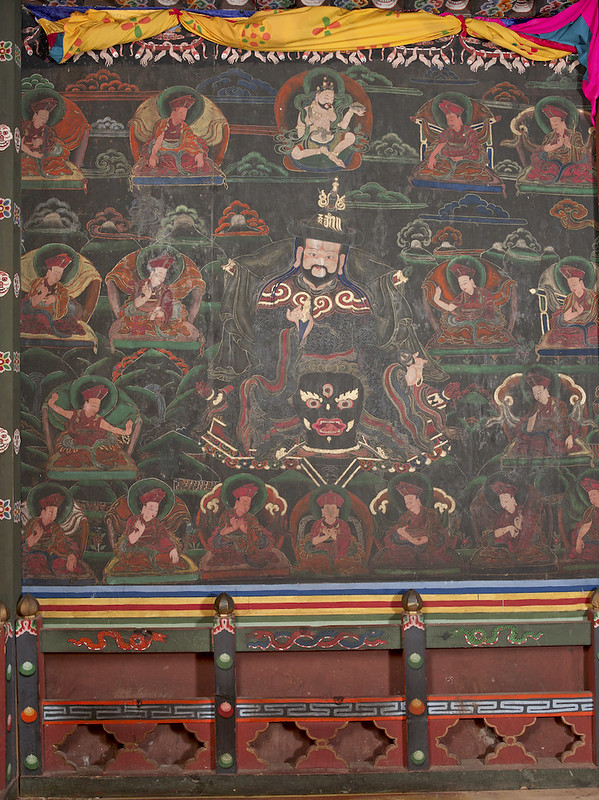 The set of three figures, with the Zhandrung in the center, the umdze on his right, and ngey ney on his left, is traditional. (Fig. 3) Two more figures, a second each of the Zhabdrung and the umdze, appear on the walls perpendicular to the main mural. (Fig. 6 and 8) The set of five is also traditional, and is mirrored in several especially sacred dances in which five Black Hat dancers form a circle within a larger group. The Zhanag or “Black Hat” actually refers to a cult of sorcerers pre-dating Buddhism in the Himalayas, and accounts for movements still existing in Cham that derive from the practice of black and white magic. Other movements in Cham have martial and agricultural origins. The rank of the figures in the mural underlines the importance of the powerful ceremony and its mystical dance event that they are experiencing. The Zhabdrung was, as we have said, the unifier of Bhutan. The umdze became the first Desi, or political (as contrasted with religious) leader of Bhutan, and was entrusted to keep the Zhabdrung’s death a secret while he ran the government. The umdze was prepared for his duties by the Zhabdrung by means of transmissions given during Black Hat dances. The ngey ney, which literally means “one who is close,” was in fact the person closest to the Zhabdrung during his whole life; as a young monk, he was an acolyte for all the Zhabdrung’s years as a naljorpa, and later was his chamberlain when he was Bhutan’s theocratic head of state. 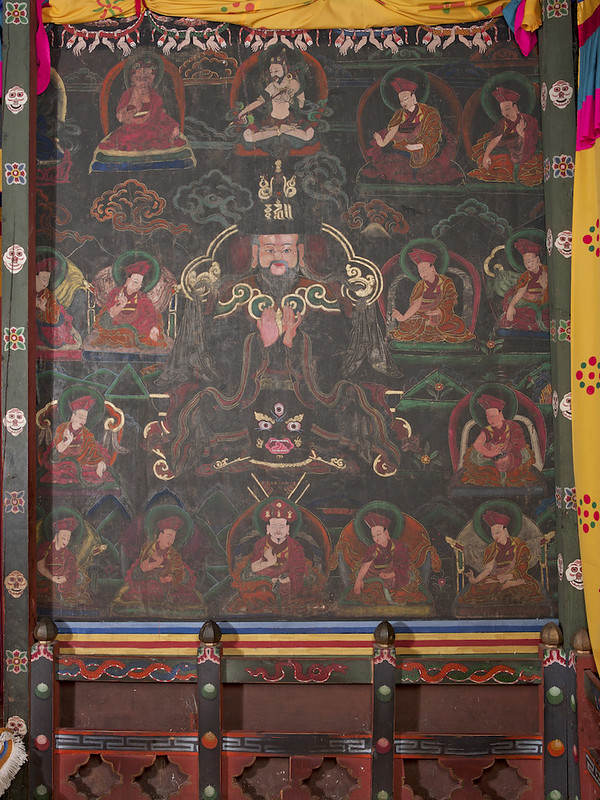 It may be helpful to introduce three terms to explain the role of dance here: “dance ephemeral” (which includes meditation and yogic visualizations that dance), “dance depicted” (such as in murals and paintings), and “dance actual” (the physical act of dancing). The figures in the mural seen as dancers: the crouching dancer with his monkey-skull mirror (umdze), the seated dancer who subjugates negative energy with a phurba, or ritual dagger (Zhabdrung), and the upright dancer (ngey ney) performing with ritual implements. In the mural each performs elements of actual Black Hat Cham. “Dance depicted” and “dance actual” correspond.

However, it is the “dance ephemeral” that is the real subject of this mural, which relates to the visionary dance of Raven-headed Mahakala (Tib. Legeon An), the original protector of Bhutan. As the story goes, the Zhabdrung conjured Raven-headed Mahakala in a yogic act of black magic warfare, and instructed him to tear out the heart of his arch-rival, Desi Tsangpa Phuntsok Namgyal, the ruler of Tibet. This conjuring is what is depicted in the mural. 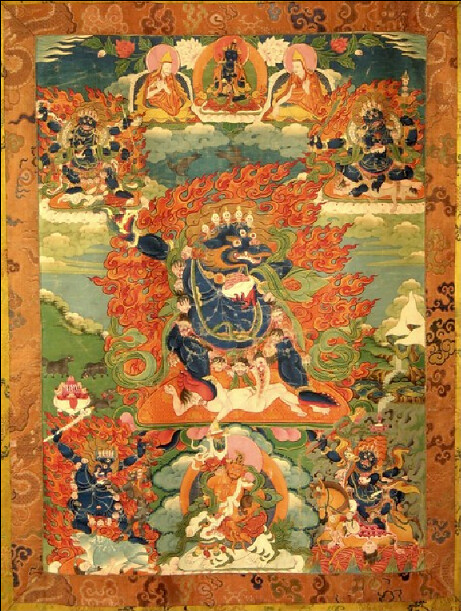 When Raven-headed Mahakala returned from his bloody task, he performed a Cham with a retinue of three emanations, holding the still-beating heart of the Tibetan Desi in his hand. The Zhabdrung had earlier ordered the umdze to hide beneath his throne, watch the events, and to learn the Cham that the four deities would perform . . . and to immediately teach it to the ngey ney.

This Cham is still performed today, 400 years later, in the chambers housing the Zhabdrung’s corporeal remains in Punakha Dzong and also as part of the Inner Dances of the Punakha Drubchen ritual, where my colleague Gerard Houghton and I became the only foreigners in history to be present in the altar sanctuary and witness this dance. Drubchen literally means “great accomplishment,” and is a ritual lasting at least a week.

The Raven masks are kept inside an altar, where they form the heads of life-sized statues. Only dancers initiated into this dance—those are routinely the four leading dancers of the Drukpa Kagyu lineage—are allowed to see inside the altar.

Thus a seemingly simple mural of three figures in a Black Hat Cham ritual is really an evocation of “dance ephemeral” that is too sacred to depict, and “dance actual” that is too sacred for the uninitiated to see. Dance is at the heart of the spiritual protection of Bhutan. It is dance that renews the original protection in an ongoing connection to the Zhabdrung and protective deities. 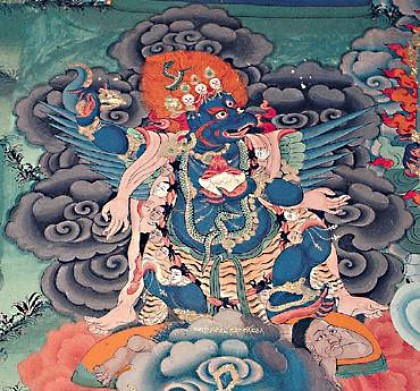 The major portion of this column is reproduced from sections of “Dance and Art in the Dragon’s Gift,” Orientations, Vol. 39, No. 1. Jan/Feb 2008.