Since its inception, this column has explored parallel paths and commonalities between technology, science, and the Buddhist traditions. I started with articles comparing standard good practices in systems design with glimpses of equivalent principles found in the Noble Eightfold Path.

The outcome of this exploration has been mixed. It is great that scientists, yogis, and meditators are talking and sharing views. However, the epistemological distance between the two worlds remains, as many scientists still regard the Dharma as unscientific and many advanced practitioners of the Dharma consider scientific methods to be arbitrary, shallow, and nowhere near adequate for studying and explaining sophisticated complex and intangible phenomena—such as consciousness and the whole of human first-person experience.

Brain research and neuroscience are making great strides and producing vast amounts of data thanks to the availability of new sensing and imaging technologies, as well as the rapid proliferation of analysis tools and techniques. Increasing numbers of scientists and researchers are also aspiring to become followers of the Noble Path, even if it is only to cope with mental stress and economic pressures.

Embracing the principles and practices of the Dharma can help to generate focus and a clearer mindset, which can be useful in research scenarios that are often clogged by disinformation and noise, flooded with irrelevant and sometimes even false research results. As humanity and technology co-evolve, it is worth trying to bring some wisdom into discourse in order to reduce the risks of becoming dehumanized.

Over time, this column has started paying closer attention to neuroscience, and contributes to work on brain studies by bringing some perspective from the wisdom traditions in the hope of inspiring the former.

The neuroscience of consciousness

The human brain is the most complex and powerful biological entity that we know of on the planet. Thanks to new technology and research data, it is becoming possible to study it in ever-increasing detail via neuroimaging, for example with an electroencephalogram (EEG). Francis Crick, Nobel Prize laureate in biology, worked on consciousness studies later in his life, triggering a renewed interest in the subject among the scientific community. This came principally from the paper he co-authored with Christof Koch, Towards a Neurobiological Theory of Consciousness (Seminars in the Neurosciences 1990).* 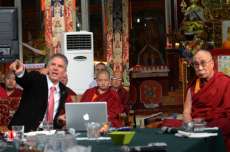 Christof Koch in dialogue with the Dalai Lama. From thetibetpost.com

Contemporary research into the neuroscience of consciousness, however, is not driven by a search for enlightenment as such, but by experimentation into sensorial, perceptual organs and by the computation of perceptual signals in the brain. This has possibly followed the initial line of thoughts seeded by Crick, who was essentially a biologist.

Two fundamental drivers of a wider hidden agenda for neuroscience of consciousness research are becoming visible:

1) To expose the mechanisms of mental responses so that they can be leveraged and exploited to shape and influence individual and social behaviors.

2) To develop artificial intelligence agents that have all the desirable highly developed intellectual qualities of humans, but without free will.

Hidden agendas are concealed intentions that cannot possibly be openly stated because they are contrary to ethics and acceptable norms. They have always funded and steered research, thus possibly explaining some of the reductionist, narrow, short-sighted, and questionable rationales for many scientific programs and results.

Scientists researching consciousness do not always adequately discriminate, for example, between human and non-human animal consciousness. They claim that because the sensorial perception and the underlying processes are very similar in both non-human animals and humans, they can study and understand the consciousness of humans simply by observing the brains of mice.

This may well be true, but the wonders of the human brain and mind are really observed in higher functions, whether they are intellectual, cognitive, or consciousness related.

That may be an underlying fallacy and may reveal something about the (unenlightened?) mindsets of many researchers and funding bodies. Difference between the cortex of mouse and human. From ncbi.nlm.nih.gov

In comparison, the Dharmic view of consciousness—based on ancient texts rather than on the use of modern technologies—is far more sophisticated.

Generally speaking, it can be said that “mind” and “consciousness” are not always clearly distinguishable in the scriptures. In the Chandogya Upanishad, for example, mind is almost used as synonym for consciousness and defined in terms of awareness (Sanskrit: saṃjñā), comprehension (ajñānam), understanding (vijñānam), insight (dṛṣṭi), resolution (dhṛtiḥ), reflection (manas), impulse (jut), will (sankalpa). Words used for “mind” are manas, prajña, sankalpa, and citta, pointing to slightly different phenomena: perceiving mind (manas), which coordinates the organs of perception; intellect (buddhi) the higher organ of thought which discriminates the self-ego (ahamkara); and the subconscious mind (citta), the storehouse of past impressions. According to some texts, the most subtle ingredients in food become the mind when eaten.

Up to a point, Buddhists understood and used the term consciousness in similar ways as the Upanishadic scholars when referencing the self, but Buddhist schools—based on Sakyamuni’s teachings—challenged the prevailing philosophical views of the time dominated by the Upanishadic idea of an enduring, substantive self (ātman) and instead expounded the notion of non-self, which is based on new ideas such as that of mind-stream, life-continuum mind, and repository consciousness (citta-santāna, bhavaṅga-citta, and ālaya-vijñāna).

The resulting vast body of knowledge known as Abhidharma consists of a systematic attempt to understand the dynamic processes of consciousness and cognition, a synthesis that can be viewed as a theory of consciousness.

As a generalization perhaps, we can say that Eastern worldviews take a holistic approach and consider everything that we see, hear, and experience as consciousness or as a manifestation of consciousness. This unity of all phenomena as consciousness and nature of mind is explicitly practiced in Mahamudra and Dzogchen traditions and can be considered the essence of enlightenment. Further, Buddhist philosophy asserts that ultimately nothing exists objectively—everything exists as the result of causes and conditions. This vision implies the acceptance of karma, reincarnation, and interdependent origination, which are largely rejected by Western science.**

One well known yogi regularly interviewed by scientists, Sadhguru (Jaggi Vasudev) always repeats that intellect and logic are like sharp knives that can dissect and deliver insights into the anatomy of the object of study. However, he adds that to understand the unity of complex phenomena, such as the mind and consciousness, we need to apply holistic and experiential methods of inquiry to make it possible for us to appreciate its broad scope in its entirety.

Neuroscientists of consciousness should—at a minimum—become aware of the long history of the study of consciousness from the wisdom traditions in order to overcome the sometimes-limited scope of their inquiry. In order to observe human consciousness, we need much more than studies of rodent brains. Future articles in the column will examine pointers from Abhidharma related to neuroscience research in the hope of igniting sparks of citta for this important and exciting field of inquiry.

* Siegel, Ralph and Edward M Callaway. 2004. "Francis Crick's Legacy for Neuroscience: Between the α and the Ω." PLoS Biology. 2(12): e419. Over the years that followed Crick proposes solutions to some smaller problems in neuroscience and brought consciousness into the scientific fold.

Mapping Your Mind: The Original Buddhist Psychology (Tricycle)
The Four Layers of Counsciousness, by Thich Nhat Hanh (Lion's Roar)
The Concept of Mind in Indian and Western Philosophy .pdf (Shodh Ganga)
Consciousness and Cognition, Mind in Buddhist Philosophy (Stanford Encyclopedia of Philosophy)
Neuroscientist David Eagleman with Sadhguru – In Conversation with the Mystic (YouTube)

Exploring Buddhism’s Tensions With Modernity: An Interview with Prof. David McMahan
Buddhistdoor View: Science and Buddhism—Alliance and Friendship, Not Ideological Uniformity
Exclusive Interview: Yongey Mingyur Rinpoche on Living Life with Balance and Awareness
How Mindfulness Works: What does the Field of Science have to Offer?
The Healing Power of Meditation: A Book Review
Interview with Dr. Helen Ma: Buddhism’s Impact in Modern Psychology