Origins of the Godai Myо̄о̄ The Godai Nyorai: Five Wisdom Buddhas, with four bodhisattvas at the corners. From wikipedia.org

The Japanese Esoteric Buddhist traditions of Shingon and Tendai have access to a wide array of deities as described in the Dainichi-kyo (Mahavairocana Sutra), the Hokke-kyo (Lotus Sutra), and numerous other Buddhist scriptures. They can be seen on the Ryokai Mandara, the Mandala of the Two Realms, which consist of the Kongо̄kai (Diamond World) and the Taizо̄kai (Womb World). The former presents a diagrammatic map of Buddhist cosmos in its pristine, adamantine, and intransient state, whereas the latter is moreso a map of the emanations of the cosmological Buddha.

Each of these nyorai, according to Esoteric thought, possesses a threefold body (Jpn: ​sanrinshin) corresponding with nature, law, and command. The first, the True Nature Body (Jpn: ​jisho rinshin), is the nyorai himself. The second, his True Law Body (Jpn: ​shobo rinshin), corresponds with the nyorai's desire to convey the Law (Jpn: ​shobo) to Buddhist adherents—this is the bosatsu (Skt: ​bodhisattva) form. The third, his Commanding Body (Jpn: ​kyoryo rinshin), confronts wayward souls immune to the gentle beckoning of the bosatsu body and uses a fearsome presence to intimidate them into becoming faithful Buddhist practitioners—this is the myо̄о̄ (Skt: ​vidyaraja) form.

So while the tathagatas represent wisdom and the bodhisattva’s compassion, the myо̄о̄ represent the power of Buddhism to overcome human inclinations, known as the three poisons: greed, confusion, and anger. And by way of mantra, mudra, and ritual centered around the myо̄о̄, these poisons can be purged. 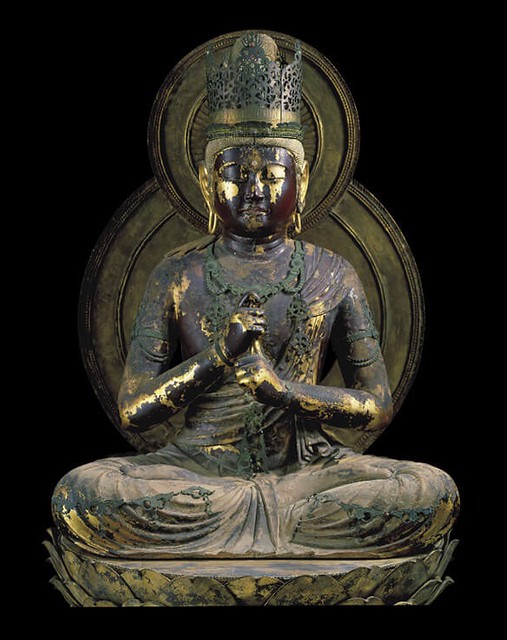 Dainichi Nyorai by Unkei, 1176. Japanese cypress with lacquer and gold leaf.
From wikipedia.org

There are numerous interpretations of myо̄о̄, all variants on the translation of the original Sanskrit Vidyaraja. “Vidya,” from which the Japanese myо̄ derives, means “light” or “knowledge.” There is a little of one definition within the other. Just as light shines to reveal the way, so knowledge makes the better path known. Vidya, then, refers to the knowledge of things in light of the state of everything else—what we call wisdom. The second part of the name “raja,” meaning king, and correlates with the Japanese о̄. Therefore, the Myо̄о̄ are known as the Wisdom Kings, the Luminous Kings, the Kings of Light, and the Bright Kings. ​The Godai Myо̄о̄ as we know them today are a product of numerous iconographic changes; as they traveled by way of scriptural translations from India through China and onward to Japan, they underwent significant transformations.

The myо̄о̄ have roots in Hinduism and Indian Buddhism, with the deities known as the ​lokapala and the ​dvarapala. The lokapala are known in Hinduism as the guardians of the cardinal directions and in Indian Buddhism as the Four Guardian Kings (Jpn: shitennо̄). The iconography of the lokapala has largely remained the same throughout the transmission of Mahayana Buddhism from India to Japan. The dvarapala are guardian deities. Usually taking a monstrous form, they are placed at the entrances of Hindu and Buddhist temples. In Japan, these most commonly take the form of the ​Niо̄ and later include the ​koma-inu (Korean dog) and ​karashishi (Tang dynasty Chinese lion). Out of these important classes of deity arose the exclusively esoteric Vidyaraja. They still serve as protectors of the Buddha and his followers, but hold a higher position in the pantheon as they can claim direct affiliation with the five tathagata, being their wrathful manifestations.

The first text to deal exclusively with the vidyaraja was the Prajnaparamita Scripture for Humane Kings Who Wish to Protect Their States (Jpn: Nin’nо̄ kyo). There are two different translations in Chinese: the ​Sutra of the Benevolent Kings of Perfected Wisdom by Kumarajiva (344–413) and the Sutra of the Benevolent Kings Who Protect the Nation by Amoghavajra. The roles of the Vidyaraja therein was to act as guardians of the land in service to the king and as protectors of the Buddhist doctrines.

Although the Godai Myо̄о̄ were not quite a scriptural grouping at this point, they were known on the Japanese archipelago through their descriptions in the Sutra of the Benevolent Kings. Ishida points out that the Rite of the Benevolent Kings (​Jpn: ninnо̄ e), a ritual based on the Mandala of the Sutra of the Benevolent Kings, was first practiced in Japan in the sixth year of the second reign of Empress Saimei (r. 655–61). Amoghavajra reinterpreted the five in his translation of the Sutra of Benevolent Kings as the Five Great-Strength Bodhisattvas of the Five Directions. They are known colloquially as the Five Great Howls and are individually identified as Innumerable Power Howl, Vajra Howl, Naga-King Howl, Fearless Ten-Powers Howl, and Thunder and Lightning Howl. Their new names correspond with the five bodhisattvas who surround Mahavairocana in the Kongokai Mandala, as well as the directions they defend. 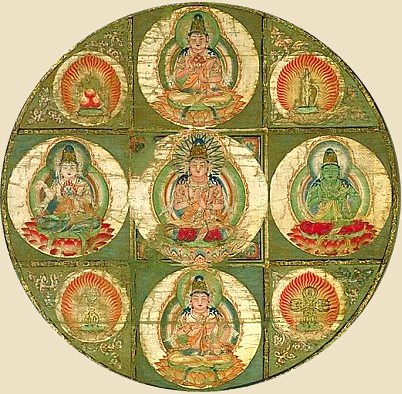 Amoghavajra then wrote a compendium for the Nin’nо̄ kyo filled with rituals and invocations. This text, called the ​Ritual Text of Dharani Invocations for the Sutra of the Benevolent Kings of Perfected Wisdom Who Protect the Nation, expands on the duties and purposes of the Five Great-Strength Bodhisattvas. He introduced a new grouping of deities called the gokongо̄, or the Five Vajra-wielders, and transmits the wrathful capabilities of the bodhisattvas to them. The bodhisattvas then become ​hо̄rin—“those who turn the Wheel of the Law”—while the gokongо̄ become the wrathful representations. These five bodhisattvas can be considered a sort of proto-myо̄о̄, with Amoghavajra’s interpretation of the grouping in the Nin’nо̄ giki being the first of the current understanding of the myо̄о̄. The Five Vidyaraja as they developed in Chinese Buddhism through the translations of sutras by Amoghavajra are now identified as Acalanatha (Jpn: ​Fudо̄), Trailokyavijaya (Jpn: ​Gozanze), Yamantaka (Jpn: ​Daiitoku), Kundali (Jpn: ​Gundari), and Vajrayaksa (Jpn: ​Kongо̄yasha).

Not long after Amoghavajra translated the sutras and tantras, the iconography traveled to Japan by way of Dengyо̄ Daishi (Saichо̄) and Kо̄bо̄ Daishi (Kūkai) in 805 and 806, respectively. They returned with Esoteric texts from various Chinese masters, among them Nagarjuna and Amoghavajra, and translated them into Japanese. As noted earlier, Kūkai founded the Shingon (True Word) school of Buddhism, based heavily on the Dainichi-kyo​, whereas Saichо̄ founded the Tendai school (a variant of ​Chinese Tian’tai), based heavily on the Hokke-kyo. The iconography of the Five Vidyaraja, here referred to as the Japanese ​myо̄о̄, would undergo drastic changes, though not immediately on their arrival. It would not be until the end of Kūkai’s life that a definitive Daishi “style” would be established.

Moran, Sherwood F. 1961. The Blue Fudo: A Painting of the Fujiwara Period.

Becoming a Buddha – A Shingon Buddhist 10-step Program
Senso-ji: A Buddhist Temple for the People
The Many Forms of Avalokiteshvara