For many Singaporeans aged 60 and above, 1969 is perhaps most memorable as a year of race riots and widespread floods.* Indeed, it was a year of unrest and uncertainty as the young island state grappled to chart a path of economic survival after severing ties with Malaysia. But for elderly Auntie Fong, the most unforgettable event of 1969 is one worthy of celebration—the opening of the Singapore Buddhist Free Clinic (SBFC) (新加坡佛教施诊) at Pu Tuo Temple (普陀寺).

“It was an auspicious day,” Auntie Fong recalls, reveling in her memories of Singapore’s bygone days. “There were many people present, many monks, and also a VIP—member of parliament Mr. Chan Chee Seng. There were lion dances and firecrackers. It was a very grand occasion!” A momentous day, the opening of the SBFC in 1969

Like many early migrants from China, times were tough for Auntie Fong back then. Home was a narrow rented bed in an overcrowded room above a shophouse in Singapore’s Chinatown, and her meager earnings as a construction worker were barely enough to pay for two meals a day and rent, much less any medical treatment should she fall ill. Many poor Chinese sought medical treatment not at hospitals, but at the shan tang (善堂), literally benevolence hall, an important provision of Buddhist temples and members of the sangha. The shan tang functioned as a charity clinic where Chinese physicians provided medical treatment and dispensed herbal medicine. Some sangha members also trained as physicians. 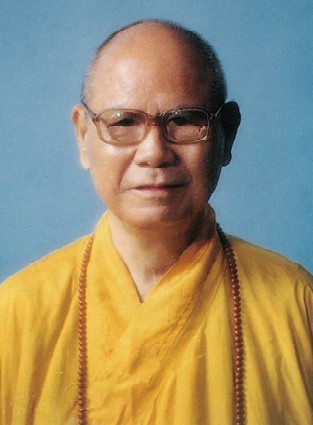 Ven. Siong Khye who initiated the SBFC in 1969

Among them was Venerable Siong Khye (常凯长老), who served in the Sangha Rescue Team in Shanghai in 1937 during the Sino-Japanese War.** He came to Singapore in 1949 to serve as the head of charity for the Singapore Chinese Physicians’ Association (新加坡中医师公会). Trained in traditional Chinese medicine (TCM) and specializing in orthopedics and osteopathy, Ven. Siong Khye also provided medical consultations at Pu Tuo Temple.

Well aware that many of Singapore’s poor migrant Chinese population had very little knowledge of, or faith in, Western medicine, and could barely afford hospital fees, Ven. Siong Khye proposed setting up a Buddhist free clinic. The idea was met with an overwhelming response from fellow Buddhists and was enthusiastically supported by Venerable Seck Hong Choon (宏船老和尚), the late abbot of Kong Meng San Phor Kark See Monastery (光明山普觉禅寺), who pledged the entire proceeds of a religious event held in 1966 to fund the project. The Singapore Buddhist Free Clinic was officially opened on 22 November 1969 in a new wing of Pu Tuo Temple, which was conveniently located in the middle of a large Chinese community. As demand for its services quickly grew, a branch clinic was set up in 1972.

Fast forward to 2016, modern Singapore is a vastly different place to that in which the SBFC was conceived. An outstanding economic success story, wealth is present everywhere in what the Economist Intelligence Unit ranked as the most expensive city in the world in 2015 and 2016.*** This economic progress has been accompanied by significant advances in the city-state’s healthcare system, undoubtedly one of the best in Asia. 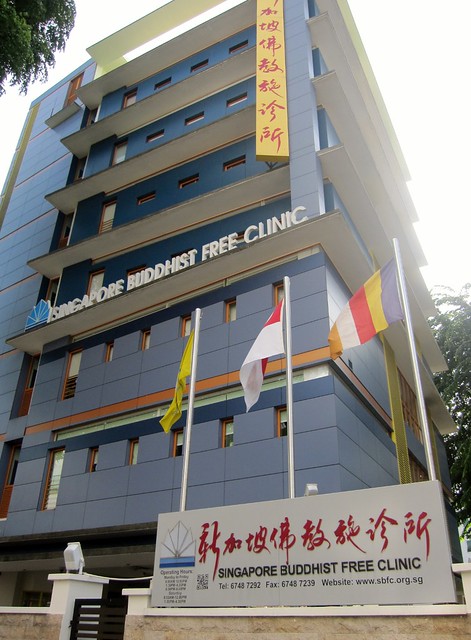 With such a transformation, one might have expected that the need for institutions such as the SBFC would be greatly minimized, if not completely obviated. However, over the years, SBFC has since opened five more branch clinics, the newest of which opened just this year. From a just 2,510 patients treated in 1969, the SBFC treated a total of 284,501 people between April 2015 and March 2016. About 100–150 patients visit each of its seven clinics daily and demand for its services continues to grow.

The fact is that, despite Singapore’s affluence, charities such as the SBFC fill a vital need for many members of the public who have slipped through the wealth net. Although the SBFC makes no distinction based on the income level of the people it treats, and has never conducted a survey of its patients in this regard, it is not unjustifiable to assume that the majority of the clinic’s patients are lower income earners for whom medical costs are a major consideration. 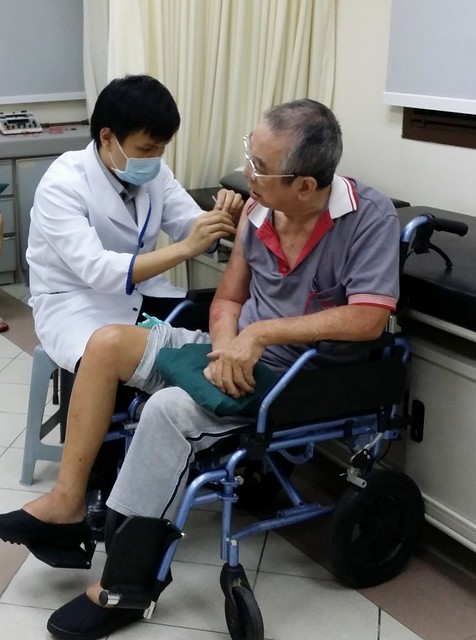 Despite recording a GDP of US$52,755 per capita for 2015,**** 91,093 Singaporeans—about 2.7 per cent of the population—received S$116 million (US$85.8 million) in some form of social assistance in the same year. This was a sharp jump from the 54,041 who received S$61 million (US$45 million) in aid in 2010. For many in this vulnerable segment of the population, making ends meet is a daily struggle. Even with the many medical benefits and subsidy schemes offered by the public healthcare system, medical fees can be a financial burden in a society with no defined poverty line. In addition, a rapidly aging population and longer life expectancy is placing greater demands on health and social services. For Auntie Fong, now 90 and living alone on social welfare of about S$400 (US$296), every cent counts and the SBFC remains her primary option for medical treatment. “I have been coming here since it started,” she explains. “I feel at home and I don’t want to take any Western medicine. It’s too costly at the public hospitals. If I have a bit extra, I make a small donation to make a little merit.”

According to SBFC CEO Venerable Sian Tong (贤通法师), the clinic’s nominal charge of S$1.00 (US$0.75) for treatment and medication is affordable by any standard. In Singapore, a dollar will not even buy a bus ride, or a cup of coffee at the local hawker center. For those aged above 60, (who make up more than 60 per cent of the SBFC’s patients), treatment and medication are free. Currently, only 34 per cent of the SBFC’s patients are required to pay the nominal S$1.00 treatment charge.

In recent years, growing interest in alternative medicines and holistic therapies has attracted younger patients to the SBFC. And increasingly, patients of other ethnicities and faiths are becoming more open to seeking TCM treatments at the clinic. Of course, any income earned from medical charges remains negligible next to the clinic’s operating costs. To ensure quality treatment, and reliability and accountability for its services, the SBFC maintains a full-time team of qualified TCM physicians and management staff, supplemented by volunteers for its many activities throughout the year. To support its operations, the SBFC relies primarily on donations from private individuals and corporations, and fundraising events such as the annual walkathon.******

In 2012, recognizing the growth in incidences of cancer among the population,******* the SBFC set up a Cancer Treatment Centre offering a range of complementary TCM treatments that patients can receive in conjunction with conventional cancer treatments to help them cope with the side effects of chemotherapy and radiotherapy, and to strengthen their immune systems. To further help patients deal their conditions, counseling services are provided to promote and support mental wellbeing. Working with empathy, trust, and compassion, the counselors help patients understand their emotions and feelings, empower them to make positive choices and decisions, and teach them new strategies for coping with their conditions. While such approaches are not cures for cancer, they do help to alleviate stress, manage pain and anxiety, and enable the patients to enjoy a better quality of life. Acupunture is one of the most common treatments at the SBFC

Forty-seven years on, the SBFC remains fully committed to its founding mission to serve the welfare of the sick and needy. “Our aim has always been to provide free medical services to the sick and needy, to relieve them of their suffering, not only physically but mentally, so that they can lead healthier and happier lives,” Ven. Sian Tong reiterates. “We treat everyone equally and all patients who are in need, irrespective of their gender, race, or religion, will be given Chinese medicine and treatment free of charge. Our sincerity, our genuine care and concern, this is the best way to promote the Buddha’s teachings of loving-kindness, compassion, joy, and equanimity.”