Throughout the United States this year, Americans have taken to the streets to protest police violence against unarmed black citizens. Some of these demonstrations have turned deadly, for both protesters and police, and televised scenes of tear gas and riot gear brought to bear at the protests are a far cry from the quietude of contemplative Buddhist practices. But according to a new book, Radical Dharma (2016), addressing the roots of suffering within ourselves entails a radical engagement with the situation on the streets.

“Dharma is essentially the training to be free just as radical[ness] and queerness is the training to be free,” says Lama Rod Owens in Radical Dharma. This parallel structure—between the Buddhist spiritual path toward transformation and a political route toward justice—animates this compelling tome from North Atlantic Books. Because America has a history of racial oppression, Owens and his co-author Rev. angel Kyodo williams assert, American Buddhists must also deal with that history and its legacy if they wish to practice the Dharma meaningfully in the modern day. 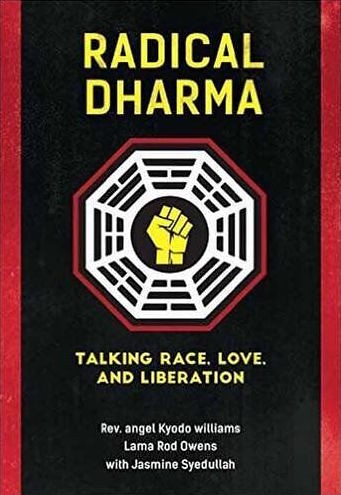 Borne from a series of public conversations between two American Buddhist teachers—Lama Owens of the Kagyu lineage and Rev. angel of the Zen tradition—Radical Dharma centers on the experiences of Black Buddhists in the United States. Rev. angel, one of only three African-American female Zen teachers and the author of Being Black: Zen and the Art of Living with Fearlessness and Grace (Compass 2002), has become a prominent figure in American Buddhism due to her focus on social justice. In Radical Dharma, she writes a cycle of essays that discuss her ideas of becoming an “awakened warrior,” and using love and Buddhist practice as a solution to injustice. Also included are essays by Lama Rod and discussion facilitator, Zen practitioner, and academic Dr. Jasmine Syedullah, as well as reprinted excerpts from several of the public discussions.

According to Rev. angel and Lama Rod, the legacy of racial injustice in the US carries forward into every institution, including Buddhist practice. This book is intended to compel American Buddhists to take a hard look at their personal practice and their sanghas to evaluate how power plays a role within those spheres, and to begin the difficult, awkward, necessary conversations about race, gender, sexual orientation, and privilege. It is not a comfortable read. It probes American Buddhist circles in a way that questions their exclusivity and calls for radical change. Truth, the authors assert, is a messy, stinky, difficult morass, but true transformation is impossible without acknowledging suffering—both one’s own personal trauma and the institutional suffering of people of color and other minority groups throughout American history. A true Buddhist path of transformation is one that embraces the liberation of all beings on both a spiritual and political level, say the authors, and American Buddhists must face social injustice head on, cultivate loving conversations about difficult topics, and work toward truly collective liberation.

The personal narratives are particularly affecting. Many American Buddhist converts are white, and Dr. Syedullah, a black woman, describes her discomfort with trying to find a sangha in which she could let down her guard and be comfortable: “When I walked through the door [of a meditation center], I saw no one like me there. It did not matter how nice folk were. With no one of color, at least no one relatable . . . I could not be in one more place where my fury or grief or truth of my feelings of isolation might be misread or might become an imposition. I needed the people around me holding my practice to get that more than I did,” she writes in her essay “The Abolition of Whiteness.” The personal storytelling brings the more abstract, historical-dimension thinking down to Earth, grounding it in real life experience.

As in Dr. Syedullah’s essay, the question of who has access to the Dharma is a central one raised in Radical Dharma—and one that the authors do not really address in practical terms. Some readers might be disappointed that the book seems to raise issues without offering solutions. The introduction invites the reader to “use” the book, as if it were a toolkit, but much of the text remains in the realm of ideas, structured as a questioning and a relating of stories rather than a solutions-based manual. Reading and listening to the narratives is itself the tool, as it can spark further discussion in Buddhist communities throughout the West about issues that might not arise comfortably or organically. 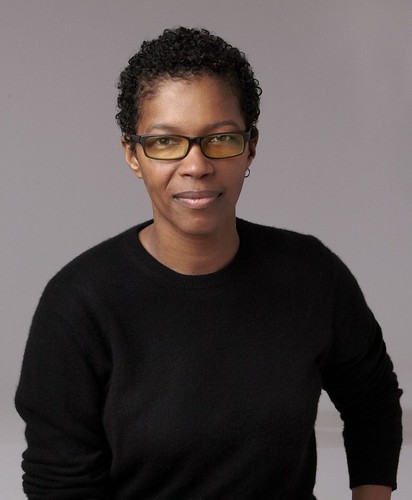 Storytelling is also an important way to fight some of the historical injustices the authors discuss. Giving voice to Buddhists who find themselves on the margins of practice is a method of taking control of the narrative. Without those voices, Rev. angel writes, we “take the narrative of the past, project it onto the future and obscure the present, leaving us to sleepwalk in the dreamscape of other people’s desires and determinations.” Radical Dharma does an excellent job of centering on the experiences of Black Buddhists and shaking off the cobwebs of living in an unbalanced national narrative. In addition, the authors speak of lineage—Buddhist and otherwise—as one way to find continuity and healing, and of telling a story that binds practitioners to the past and future in a positive way.

Ideas of landscape, homelessness, going forth, marginality, returning home, and skirting boundaries return again and again throughout the text. The authors retell their own stories of leaving homes and finding new ones in the Dharma, but they also speak repeatedly of not quite fitting in, of being different, of being bullied or pushed away, and of consciously existing in a marginal state that questions the status quo. “To be radical is to constantly live in the territory yet undiscovered, the liberation yet unknown,” writes Rev. angel.

Living on the margins of gender plays a role in the book; the authors also discuss desire, sexuality, and love. Working toward liberation can be an exhausting process both internally and externally, the authors acknowledge, and so acting with love—toward others and toward oneself—becomes essential. Healing ourselves is a radical act of self-love and one that anyone involved in transformation must incorporate into their practice, they write. “In truth, we have to integrate our wounds into our understanding of who we are and what we are really capable of so that we can be whole human beings,” says Rev. angel. “Only from there can we begin the process of healing the brokenness, the broken-heartedness without ourselves that is the foundation for beginning to heal . . . our larger society.”

Despite the excellent discussion of white-dominated convert Buddhism in the West, the book does have a glaring omission: the practices of communities of Asian descent in the United States are not touched upon. There is a brief mention in the introduction of how Buddhism, in moving into the West, often loses its roots in Asian traditions, but that is the extent of the acknowledgement. While it is not the primary objective of the authors, who wish to discuss issues central to mass incarceration, police brutality, and the Black Lives Matter movement, the overall argument suffers for not at least touching on the perspectives of other Buddhist communities of color in the US.

As a call to conversation and a spark for motivating the liberation of all beings, Radical Dharma succeeds. This is tough, honest practice, threaded with a deep and fierce love for the Dharma, for community, and for the possibilities that the future holds. As Dr. Syedullah observes, “We must begin to practice sitting together to stand together.”