The Lotus is a Form of Dance: Reverend Teijo Munnich

“When I was young, I either wanted to be a nun or a dancer,” says Reverend Teijo Munnich, who, now 69 and a Zen Buddhist priest, still possesses a youthful, clear voice and a manner that modulates quickly between laughter and somberness. The monastic path, so associated with stillness and inner reflection, seems somewhat at odds with the career of a dancer, which is filled with movement and founded in the body, yet Munnich has somehow managed to create a life that incorporates both.

Becoming a nun won out, at first. From the age of five, Rev. Munnich attended Catholic schools in the US. After high school, she entered a convent—a vocation that she withdrew from at 21 amid upheavals within the church and then returned to years later, when she donned Zen robes in place of her earlier Catholic habit. 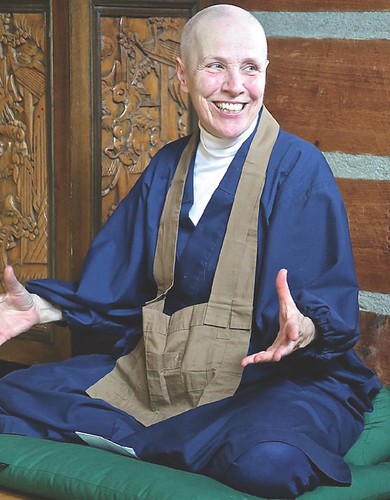 In Catholic school, she had learned a rudimentary form of meditation: “Just sit down and shut up.” This stillness gave her a sense of discipline that she has carried with her ever since. Later in life, as a student of Dainin Katagiri Roshi, she learned the concept of shinkantaza: just sitting. “My teacher used to say, it means just sit down and shut up,” she says, laughing. “Katagiri Roshi tried to make things kind of understandable for us.”

Nowadays, as the founder and abbess of the Great Tree Zen Temple in Asheville, North Carolina, Rev. Munnich has found a balance between her Catholic and Buddhist selves, as well as a way to bring her love of dance into her Zen practice. At Great Tree, designed as a temple for women, she has adapted a traditional Zen space to different needs and learning styles. Great Tree serves both men and women, and offers residencies exclusively for women, billing itself as a place to “explore feminine spirituality” within the Zen tradition. Munnich also serves as a Dharma teacher for the Zen Center of Asheville and Charlotte Zen Meditation Society.

Ven. Munnich’s ideals seem to rest in equilibrium: between honoring tradition and adapting it for contemporary contexts, and between the stillness of zazen practice and the movement of dance. She has choreographed, as she puts it, a style of teaching that explores and honors Buddhist tradition, even while expanding its borders.

Perhaps it’s only natural that a “Catholic Buddhist,” as Rev. Munnich calls herself, would be interested in balancing and bridging traditions. During a tumultuous period for the Catholic Church, she left the convent and entered the evolving secular world of 1960s America. She felt wary of institutionalized religion, yet remained curious about how to make her spiritual life more meaningful. “For about 6–7 years, I distanced myself from my spiritual practice,” she recalls. “What I started doing instead was studying a lot of dance. . . . In Catholicism, I had been explicitly taught to distance myself from how my body was feeling, so this was kind of radical for me.” Eventually, wanting to reconnect with her spiritual side, she went looking for a teacher.

At age 29, broke, lost, and trying to find a Go club, she accidentally wandered into the San Francisco Zen Center. “I got really drawn to the energy,” she says, her voice intent. “I said to the lady there, I would stay except I don’t have any money. . . . She got me a two-month job, then I got a place to stay about a block from the Zen center.” There she met her teacher, Dainin Katagiri Roshi, whom she eventually followed to the Hokyoji Zen Practice Community in Minnesota.

Despite her interest in Buddhism, she remained wary. “I didn’t think I wanted to stay,” she recalls. “I already had some resistance to anything that looked institutionalized. I thought, I’m going to commit myself for a few months to this. Then I thought, okay, I guess I’ll stay a little longer . . . and I ended up staying, getting really involved, getting ordained, and going to Japan. I don’t know what happened, but 15 years went by!”

During her years of study, she noticed something about Zen practitioners: “They were mostly men.” After she ordained in 1981, she went to the Tassajara Zen Center in California, and again: “It was predominantly men. I thought, oh, it’s happening again!” The same happened in Japan. The gender imbalances weren’t the main problem; it was the way her insights were received in those environments, she says.

“[In Catholic school] if I said something that came from a deep place, it would be understood by someone and they would pick it up and could take it to the next level. But in the Zen world, a lot of the men couldn’t understand what I said. Either they would make fun of it, or it would just be dropped,” she says seriously. “If women were practicing together, it would happen that there would be some support for it and it would be strengthened.” Thus was born Great Tree Zen Temple. Munnich describes it as a place where “we can balance out the male practice that is Zen with a more feminine insight.” Her goal hasn’t been to define the feminine, but to explore what it might mean to serve all perspectives more evenly.

Reaching out to women and families has been part of that re-balancing act. Paige Gilchrist, who has been a student of Rev. Munnich for almost 20 years, wrote in an email: “I view Great Tree as a big, welcoming country home where we’re all lucky enough to gather to learn about and explore issues of family and spirituality . . . and often have a raucous good time!”

“Teijo is a joy to be with. She is playful, fun, and wise,” says Peggy Rowe-Ward, a Zen teacher who has served on the board of Great Tree. “She loves working with children and has had an active family practice. They are big on dance and theater, which is a wonderful way to help us all to embody the practice.”

To Ven. Munnich, who incorporates the Alexander Technique (a system of mind-body re-education), tai-chi, and yoga into her teachings, being a Dharma teacher is something like creating a dance: “If a teacher choreographs a piece and the movements are familiar for me in some way, it’s easy to pick up the dance. But sometimes a choreographer thinks differently, and it takes a lot more effort to understand how to do the movements.” Buddhist teachers also have a natural way of being, and that can be unconsciously gendered, making it more difficult for some people to access. Part of Ven. Munnich’s challenge has been re-choreographing Zen in a way that balances out the masculinity and male-centeredness. That includes not only teaching style, but also practical matters such as scheduling to accommodate women with families.

Although she has re-interpreted Zen, the heart of Ven. Munnich’s practice remains the same: just sitting. She says that she has sometimes been criticized for not making zazen “more interesting” for American students. “The thing is, to me, there is a lot of exploration that happens within in this practice that is not apparently so interesting or fun. It’s very subtle,” she says. “If you feel good afterwards, that’s not necessarily an indication that it’s gone very deep. [Zazen] is a good opportunity to look inside and see what’s going on, and see our misperceptions, our delusions, our insights, but it takes a little work.”

And the dancing? It’s a natural complement to sitting. “It’s really very practical,” she says. “The more you can sit in an upright position—a natural upright position—the more your chest will open and your breathing will send pure blood to your brain. I think the full lotus is really a form of dance.”