The Zen of Temples

Japan, and especially its cities of Kyoto and Kamakura, is known for its Buddhist temples. Many of them are beautiful, serene, and inspiring. In this essay, I will focus on the main Zen temples in these two former capitals of Japan and explore their history.

The first Zen Buddhist institutions in Japan developed during the Kamakura period (1185–1333) and influenced its capital Kamakura as well as Kyoto, the capital of Japan during the Ashikaga Shogunate of the Muromachi period (1336–1573). The Ashikaga shoguns installed the so-called five-mountain (Jap.: gozan) system, first in Kamakura, then in Kyoto.

The temples of the five-mountain system in Japan were modeled after the “five mountains - 10 temples - larger temples” (Jap.: gozan - jisatsu - shozan) system of Song China. Sponsored by the government of the Kamakura and Muromachi Shogunates, the five-mountain system not only represented the monastic elite of Rinzai Zen Buddhism, but also expressed the close relationship between the Rinzai institutions and the government. The temples of the five-mountain system were under the direct jurisdiction of the shogunate and their office regulating the monasteries of the Zen and Ritsu schools of Buddhism, the zenritsugata. Some of the temples in the five-mountain system were built explicitly for political purposes, providing a residence for emperors who had abdicated (Jap.: jō’ō) or even joined the Buddhist sangha (Jap.: hō’ō). They constituted centers of power and wealth. ­­­In particular, the Ashikaga shogunate used the ten-temple system to reward those monks who conformed to the shoguns’ policies. While gozan means five mountains—the number of temples that belonged to this system varied. The first official list of five Zen temples in Kamakura, where the shogun resided at that time, was compiled in 1341, but not soon after five temples in Kyoto were added. The final canon from 1410* not only catalogs five temples each in Kyoto (Tenryū-ji, Shōkoku-ji, Kennin-ji, Tōfuku-ji, and Manjū-ji) and Kamakura (Kenchō-ji, Enkaku-ji, Jufuku-ji, Jōchi-ji, and Jōmyō-ji), respectively, but also identifies Nanzen-ji from Kyoto as the head temple of the five-mountain system. In 1379, control of the five-mountain temples shifted from the secular office to the monasteries themselves and, in the 15th century, the political significance of the gozan temples decreased with the decline of the Ashikaga shogunate. The accomplishment of the gozan temples lies in their contribution to Japanese culture. Under the sponsorship of shoguns and emperors, the temples of the five-mountain system not only served political and spiritual purposes, but also provided a space for the cultivation of the arts, most obviously architecture, garden landscapes, and literature. In Japan today, the five-mountain monasteries are known for their impressive landscaping, especially in the case of Tenryū-ji, and its own brand of literature called gozan bungaku. Musō Sōseki (1275–1351), who is officially identified as the founder of Tenryū-ji and Shōkoku-ji, incorporated and refined the kare sansui (dry mountains and water) style of gardens that expressed the principle of the interdependent opposites yin and yang in stone gardens while Chūgan Engetsu (1300–75) stands out among the poets and writers of this time. A map of the temple grounds at Kenchō-ji. Photo by Áskell Jónsson 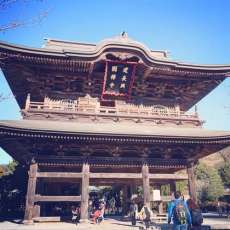 Outside of the gozan system were the so-called rinka temples. Rinka is short for sōrin rinka. Evoking the image of a thickly grown forest, the term sōrin is used to designate the hall where Zen monks practiced zazen. Contrary to the gozan temples, the rinka temples were not under the jurisdiction of the zenritsugata. These large and mostly rural temples belonged to, for the most part, the Daiō and Genjū lineages of the Rinzai or the Sōtō schools of Zen Buddhism. Their patronage was mostly retired emperors, feudal lords that were at odds with the shogunate, and members of the merchant class that had slowly ascended in importance and influence during the Muromachi period (1333–1568). The key representatives of these monasteries were Nampo Jōmyō, also known as Daiō Kokushi (1235–1308), Shūhō Myōchō, who received the honorific title Daitō Kokushi (1282–1338), Kanzan Egan (1277–1360), Yōsō Sōi (1379–1458), and Ikkyū Sōjun (1394–1481) on the Rinzai side, as well as Eihei Dōgen (1200–53) and his disciple Keizan (1268–1325) representing Sōtō Zen. The three main temples representative of this category are Myōshin-ji, Daitoku-ji, and Eihei-ji.

In contrast to many Buddhist temples in China, the layout of Japanese Buddhist temples is rather idiosyncratic. The exception to the rule is provided by the temples of the gozan system. Martin Collcutt suggests that the prevalent structure of these temples contained seven buildings arranged to resemble the shape of a human. In the center of the temple, symbolizing the human heart, was the Buddha hall (Jap.: butsudō), while the Dharma Hall (Jap.: hattō) symbolized its head. The monks’ or nuns’ hall (Jap.: sōdō), the kitchen (Jap.: kuin), and the main entrance, the “mountain gate” (Jap.: sanmon) comprise the remaining fundamental features of the temple grounds. Temples that were built for the purpose of protecting the government or as the center of Dharma lineages also included five-storied pagodas (Jap.: gojūdō) symbolizing the five elements, earth, water, fire, wind, and ether, or three-storied pagodas, which contained relics of the Buddha (Jap.: busshari). The Muromachi period also saw the beginning of the system that assigned one resident priest to each temple (Jap.: jūjiseido). Sōtō Zen temples also include a hall dedicated to the memory of the founder of the temple, the kaisandō.

In the Edo period (1603–1868), the Tokugawa shogunate implemented the danka system, which ordered every family to be recorded in the funeral registry of a local temple. Temples, whose primary function was to serve the community, the danka, by providing funeral, cremation and memorial services were called dannadera. The term danna constitutes the Japanization of the Sanskrit word dāna, giving, the first of the Six Perfections (Jap.: haramitsu) of Mahāyāna Buddhism. It is sometimes translated as charity, even though this translation can be misleading since the argument has been made that dāna institutionalized the redistribution of wealth. Be that as it may, the danka system affected life in the Zen Buddhist temples in two ways. First, the resident priest (Jap.: jūshoku) was responsible for the funerals, the registry, and the community surrounding his temple. Second, temples now added another hall to the temple grounds, the ihaidō, which housed the commemorative tablets, ihai, of the deceased community members. Today, Japanese Buddhists distinguish between local temples, dannadera, on the one side, and monasteries (Jap.: sō’in) or nunneries (Jap.: ni’in), which are primarily dedicated to practice, on the other. The latter are also known as practice temples (Jap.: shūdōin). However, practice monasteries often also serve a local danka, and dannadera regularly admit monastics to practice self-cultivation.

Furthermore, temples and monasteries served the local community in myriad other ways by providing medical services, spiritual guidance, and even political protection. For example, Tōkei-ji in Kamakura, nicknamed Enkidera (Divorce Temple), protected women during the Edo period who had suffered domestic abuse. Today, many temples offer new forms of spirituality for lay people, such as pilgrimages and meditation groups (Jap.: zazenkai). Tōgan-ji, a Sōtō Zen temple in Nagoya, for example, performs mizuko kuyō to commemorate the loss of a stillborn child or an aborted fetus, Bodai-ji on Mt. Osore in Aomori Prefecture offers a whole range of unorthodox death and memorial rites, and Daizen-ji offers suicide-prevention workshops.**

** The Varieties of Practice in Soto Zen Buddhism (Buddhistdoor Global)

A Once-in-a-lifetime Experience: On Study Abroad in Japan (Luther College)

Samurai and Monks: Lessons in Impermanence
Hiroshima’s Hibaku Jizo
Senso-ji: A Buddhist Temple for the People
Zen and the Art of Dry Landscape Gardens