Theravada Buddhism and Teresian Mysticism: A Reflection on Interreligious Dialogue Attendees at the first interfaith dialogue between Buddhists and Carmelies in Avila. Photo by Buddhistdoor Global

The “1st World Encounter Teresian Mysticism and Interreligious Dialogue: Theravada Buddhism and Teresian Mysticism – Meditation and Contemplation Pathways to Peace” was held from 27–30 July at the International Centre of Teresian and Sanjuanist Studies (CITeS) of the University of Mysticism in Avila, Spain. The conference was organized with the Centre of Buddhist Studies (CBS) of The University of Hong Kong (HKU). Venerable Dr. Amrita Nanda and I participated in this conference to lead the Buddhist chanting ceremony conducted every morning after the Christian mass. It was, for me, a true experience in interfaith friendship and mutual respect.

About a year ago, Daniel Millet, a PhD candidate at CBS who was closely associated with the conference organizers, invited me to attend the conference. As a Theravada Buddhist monastic, I was eager to learn about both traditions’ common practices of meditation and contemplation.

The dialogue was aimed at addressing possible windows of affinity between the mysticism of the Order of Discalced Carmelites and Theravada Buddhism. Ethically, the objective was to avoid reducing both traditions to “sameness” by promoting the principles of equality and deep respect for cooperation with each other. Therefore, the theme of the conference indicated that meditation and contemplation constitute the pathways to peace.

Ten papers in total were presented by delegates from Hong Kong, Spain, Sri Lanka, the United Kingdom, and elsewhere. Four participants, who contributed papers to a friendly contest about interreligious dialogue were awarded the 2nd International Award Teresa of Jesus and Interreligious Dialogue.

The first day of the conference began with opening speeches on the importance of interreligious dialogue. Dr. Francisco Javier Sancho Fermin, director and professor at CITeS, and Venerable Hin Hung, director of CBS, delivered speeches from the perspectives of the Carmelite and Buddhist traditions, respectively. Ven. Hin Hung said: “Truth and goodness are not tradition-specific, and any tradition can be perfected in its own way. Being rooted in one’s own faith, nonetheless, we can recognize what is good in other religions. We surely can learn from each other but without ever losing our own identity. Many Buddhists know of the Carmelites’ rich contemplative tradition, and deeply appreciate the work of St. Teresa of Avila. It will be beneficial for Buddhists to learn from the experiences and insight from the Carmelites’ contemplative tradition.” (Tea House)

Ven. Hin Hung also said that interfaith dialogue does not just mean the absence of explicit conflict. “Everything is interconnected to everything else and there can be no peace in the world without peace inside the person. In this light, both our religious traditions recognize that meditation and contemplation are the most effective tools to deal with hatred, greed, selfishness, and ignorance, the root of suffering and violence. Therefore, to promote meditation and contemplative practice is to promote inner peace and peace in the world.” (Tea House)

The first session of the conference began with an introduction to the Carmelite and Theravada Buddhist traditions. Fr. Agustí Borel, definitior of the Discalced Carmelite Order, and Dr. Asanga Tilakaratne, professor of Pali and Buddhist Studies at the University of Colombo, Sri Lanka, presented papers titled “The Order of the Discalced Carmelite” and “The Theravada Buddhist Tradition,” respectively.

Saint Teresa of Avila (1515–82) introduced reforms to the Carmelite Order of her time, and founded the Order of Discalced Carmelites, introducing more ascetic practices of solitude and prayer based on meditation and contemplation included in Saint Teresa’s book The Interior Castle. It was suggested by many speakers that meditation and contemplation have many parallels with Buddhist samatha meditation, a practice of the calming of the mind, which is systematically presented in the Visuddhimagga (The Path of Purification), a masterpiece of Theravada Buddhist doctrine written in Sri Lanka in the 5th century by Buddhaghosa.

The following day, Dr. Maximiliano Herráiz, Ven. Prof. Raluwe Padasiri, Sister María José Pérez, and Ven. Dr. Khammai Dhammasami (Oxford) presented papers titled “Virtue and the Teresian Path of Prayer,” “The Role of Sila (Virtue) in the Path to Liberation,” “Vocal and Mental Prayer and Religiosity in the Carmelite Tradition,” and “Prayer, Worship and Ritual in the Theravada Tradition,” respectively. The session concluded with a guided meditation by Venerable Dr. Dhammadinna, professor at the Dharma Drum Institute of Liberal Arts in Taiwan.

The session on the third day was divided into two panels. In the first panel, Dr. Rómulo Cuartas and Dr. G. A. Somaratne presented papers titled “Discursive Meditation and the Prayer of Active Recollection” and “Preliminaries of Concentration Meditation.” The second panel was conducted by Igor Giusti, Sister Cristiana Dobner, Imanol Begeneta Messeguer, Jesus Collado Gómez, and Joy Alumkal Philopose. All were awarded the 2nd International Award Teresa of Jesus and Interreligious Dialogue.

Igor Giusti received the first prize for his paper, which compared Saint Teresa and the Buddha’s final spiritual attainments. Giusti’s approach was exceptional because he compared Saint Teresa’s seven mansions with Theravada’s eight states of absorption (jhanas). The seven mansions in Saint Teresa’s The Interior Castle represent progressive stages that result in union with God. In Theravada Buddhism, the eight absorptions are meditative attainments and a person who realizes any of the eight states while practicing insight meditation (vipassana) eventually attains Nibbana. Despite differences, Giusit said that the description of the final goals are similar in three ways: peace, non-self, and a “dispassion” of suffering in Saint Teresa’s mystic path and the complete cessation of suffering in Theravada.

I believe that while the two traditions need not agree on the same ultimate spiritual goals, both can work together for the common good. Many felt, as I did, that there are huge areas of intersection in both traditions. We are like good neighbors who can cooperate to alleviate suffering and foster love, compassion, and meaning. The main aim of the conference was to advocate for a world with more harmonious relationships. These intriguing commonalities between the Theravada and Carmelite paths indeed deserve more attention and discussion. 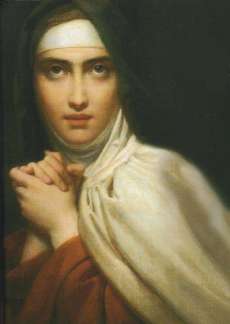