Tibetan Book of the Dead, Part Two: The Hour of Our Death Wrathful deities and animal-headed dakinis that are prevalent during the 13th and 14th day of bardo. Detail from 58 Wrathful Deities, painting, 20th century, Bhutan. Image courtesy of the Rubin Museum of Art, New York

The first metaphysical thing I learned about Buddhist Cham dance was that the same monstrous deities appearing in the annual Cham performance will appear again in one’s mind during the process of dying. If one fears these fiery creatures and is spiritually unfocused, one will suffer in bardo—the intermediate state that follows death. But if one recognizes the wrathful deities for what they are—illusions; emanations of the mind—one can thereby attain emancipation and suffer no rebirth. 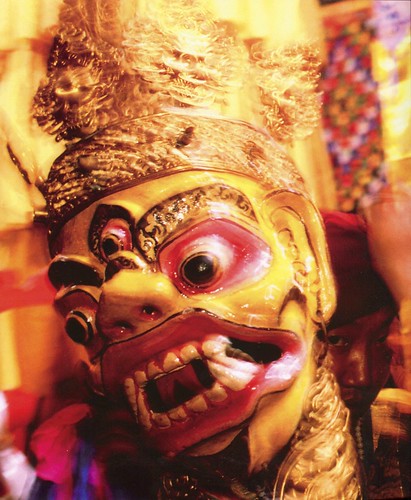 Cham dance imprints the wrathful and peaceful deities, as well as the yiddam deities, upon the mind of the observer. A baby will nurse in his mother’s lap, seated at the edge of the chamra, or dance ground, as the monstrous masks spin by one after another, hour after hour, day after day, year after year. There could hardly be any more useful, lifelong preparation for the inescapable journey of death than this imprinted spiritual recognition that saves one from re-birth. People who live in traditionally Buddhist lands in the Himalayas and greater Tibetan region are on familiar terms with these esoteric gods. Tourdag, keepers of the charnal grounds, perform extraordinary back bends as they munch on human flesh. Yungdrung Choeling Dzong, Bhutan, 2006. Photo from Core of Culture

I had an opportunity to witness this mechanism of death-rehearsal at work recently in the spiritual practice of another religion. My mother died over the course of a week last November, and fortunately I was able to be present for much of that. Over the course of the past year, I have been immersed in the Bardo Thodol—often known as the Tibetan Book of the Dead—so it wasn’t any stretch to apply what I had learned to what I was observing on a daily basis with my mother. A devout Catholic with a devotion to the Virgin Mary, she knew how to pray and meditate and practice contemplation. “Saying the Rosary”  is basically a yoga in which a mantra about Mary is repeated 50 times, in five sections of 10 mantras. One bead equals one Hail Mary. More than 800 years old, the Marian Rosary is one of the oldest extant spiritual practices in Christianity. The Virgin Mary gives the rosary to St Dominic. From the Order of Dominicans, 800th Jubilee Anniversary of Cloistered Prayer. 2015

The mantra is the Ave Maria, the Hail Mary, and it has a parallel use to the Book of the Dead. “Hail Mary, full of grace, blessed are you among women and blessed is the fruit of your womb.” This is the first half and comes from the Gospel of Luke. The second half is original and came in a vision of Mary to Saint Dominic in 1208. The Virgin Mary appeared to him, gave him a rosary, and taught him the Hail Mary mantra and the Rosary yoga, “Holy Mary, Mother of God, pray for us sinners, now and at the hour of our death.” 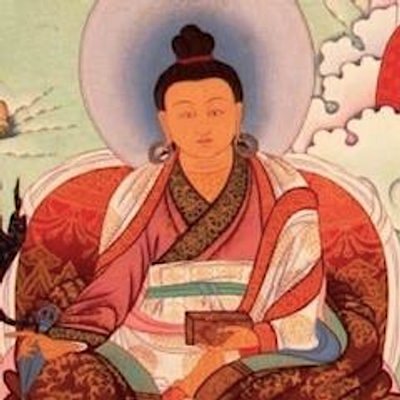 My mother said this Hail Mary mantra countless times during her life. The Rosary is a very intelligently designed yoga: there are five sets of mantras, and a different mental concept, envisioned event, spiritual virtue, or ascetic technique can transform the practice of saying the Rosary into any number of mental and spiritual experiences. But one is always rehearsing the final act of mercy. The entreaty to Mary, for Catholics, is more of a guarantee: how can God deny his mother? Holy Mary, Mother of God—pray for me at the hour of my death!

As I watched my mother’s physical systems and mental faculties fail in sequence over time—in parallel with the journey in the Book of the Dead—all that remains is breathing, and the consciousness to know existence. By then, the Hail Mary is the breathing.

Like reading the Bardo Thodol to a dying person, whenever someone would arrive to see my mother, they’d say a few Hail Marys. The priest would visit and we’d all say the Rosary. Everyone knew it, her friends, family, the church community. The whole town said a Rosary at her wake before her funeral. I know there are some scholarly disagreements about whether the Bardo Thodol is for after death, or during life, and all I can say by way of response is “Hail Mary.” Make it a part of you. It will be there, the key to the transition.

I am not claiming any kind of parallel meaning between Tantric Buddhism and Catholicism, although Timothy Leary, who translated a version of the Book of the Dead as a manual for the sacramental use of LSD, pointed out that among Christians, Catholics alone equip the believer with anything to do in the afterlife; a journey to make if you don’t hit the Clear Light in your first shot—as I am confident my mother did. I am only sharing some thoughts that occurred to me about the Book of the Dead while I attended to my dying mother last year. In fact, my father died only eight months before my mother, so it has been an extended practical meditation on two deaths—not without suffering, yet truly beautiful. Among the many texts of Tibetan Buddhism, perhaps the Bardo Thodol asks the most in terms of individual engagement. Even this rambling account is my way of processing my mother’s death and applying my understanding of the Book of the Dead.

A singularly evocative event was the moment of my mother’s death. In the Book of the Dead, this moment receives its own section. It is the ski jump of the holy elite. Either you go for the Clear Light of void and bliss, knowing all to be illusion in the very moment, or you begin an ever more dark and dismal journey though bardo, during which other less-perfect opportunities to attain enlightenment and avoid rebirth appear. The image of this Great Liberation is the Primordial Buddha Samantabhadra in ecstatic embrace with his perfect Primordial Dakini. It is beautiful. Transcendent. It is the universe completely happy to have the dead person back together with it: a jubilant symbol for the very moment of death. 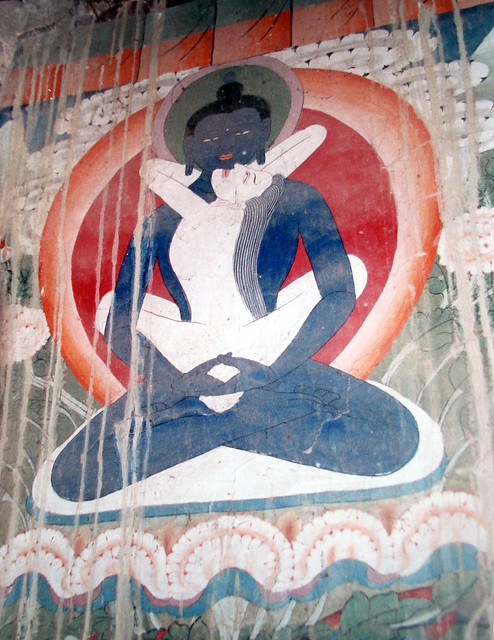 When my mother died, she took on the most extraordinary expression of contentment and beauty and timeliness. Her body, curled up with pain, relaxed and lengthened. There were no wrinkles in her face. She looked young, her skin shining. She looked tested by fire, but she looked like she had won. The whole process was one of freedom. I don’t think her experience and expression are particularly out of the ordinary. I think she saw the Clear Light and recognized it from a lifetime of yogic practice. Her Great Image is of the Virgin, but it has some uncanny similarities with the Primordial Buddha in the blue and white color, the transcendent posture, and the yab yum, or essential unity of male and female essence (Mary implies Jesus). It’s worth pointing out that in the West, Catholicism has kept Virgin and Mother Goddess devotion alive. The Female Divine is the basis of tantra. 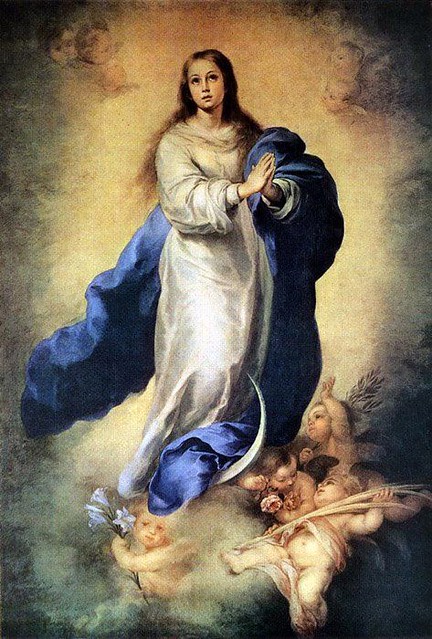 The Immaculate Conception, painting, 1665–70 by Bartolome Murillo.
Adorned with the sky, upon a crescent moon

My great-great-aunts, Sister Cosmos and Sister Concepta were nuns of the Order of the Blessed Virgin Mary, out of a Motherhouse in Dubuque, Iowa, in the first half of the 20th century. My mother and her sister used to visit them in their old age, infirm, gathered with the other sick and dying nuns around the chapel so they could hear Mass everyday. My mother told us stories all our lives of the things that Cosmos and Concepta’s nun friends would be saying; things they heard as children:

“Sister! Did you hear? Sister Mary Margaret died.”
“Oh, tell me, how was it?”
“Oh, it was the most beautiful thing you ever saw.”
“Ah! I am so sorry I missed it.”
“Well, there’s no question where she is. There was a bunch of us there.”

That these great legacy religions replete with their rituals and physical expression and long history of meditation should produce manuals and methods for the act of dying is characteristic of the sense of organic cosmic unity that undergirds them. Death is like anything worthwhile: the point is to plan ahead so you can enjoy it. I hope my death is the most beautiful thing you ever saw. My mother’s was. 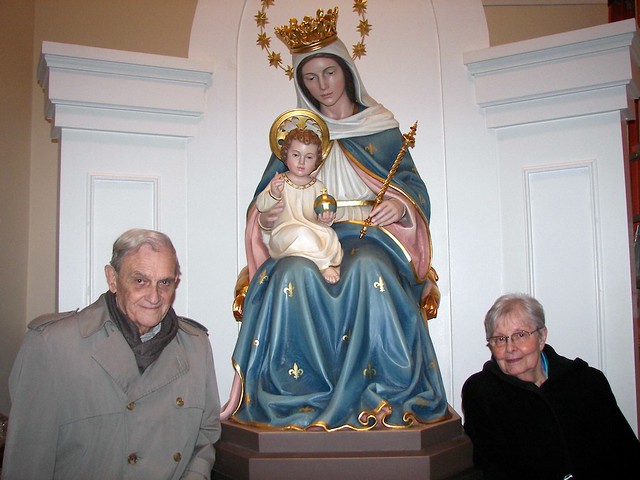 My parents, William and Helen Houseal, with Notre Dame du Lac Michigan, a carved wooden sculpture
of the Virgin Mary they commissioned from Italy for their church in the US. Her cloak is made of the
Heavens. Image courtesy of the author

This article is dedicated to the memory of my mother, Helen Ann Houseal, who taught me how to pray and how to meditate.