Noted author and former education minister from the Himalayan kingdom of Bhutan Thakur S. Powdyel told academics in Malaysia recently that “green schools,” which provide curricula based on a holistic approach to education that goes beyond a focus on academic achievement, are key for the future success and development of a compassionate society.

Speaking at the International Islamic University Malaysia (IIUM), Powdyel emphasized that children are a nation’s most precious resource, and that investing in the next generation of leaders determines the future and direction of that nation. As such, green schools can play an essential role in nurturing the next generation of leaders as balanced individuals who are equipped to work within and for the benefit of a community.

IIUM is a public university headquartered in the Malaysian state of Selangor, with six campuses across the country.

“With all the good that it has done, modern education leaves much to be desired,” said Powdyel, observing that although contemporary education systems often produce successful young people who excel academically and are competitive with their peers, they often felt isolated from themselves and others. (New Straits Times)

“A wise person once described education as the ‘noble sector’ and called upon others to help children and youth cultivate the nobility of the mind and the nobility of the heart, which would lead to the cultivation of the nobility of action,” Powdyel explained. “As things stand, there is an urgent need to restore education to its core function as the ‘noble sector’ that seeks to harmonize the gift of the head, the heart, and the hands, thereby enabling young men and women, children and youth to develop into well-integrated individuals who are at peace with themselves and at peace with the world around them.” (New Straits Times)

A respected educator in his native Bhutan, Powdyel was Bhutan’s first democratically elected minister of education, helping to move Bhutan toward fulfilling its UN-backed Millennium Development Goals and the kingdom’s constitutional education mandate. He is also the author of the books Right of Vision & Occasional Views (2014) and My Green School: An Outline (2014). Powdyel describes My Green School as “a meditation on the core function of education,” in which he expresses his vision of holistic education. The book has since been translated into Catalan, German, Japanese, Kannada, Spanish, and Vietnamese.

In 2011, Powdyel was a recipient of Gusi Peace Prize, sometimes referred to as the Asian equivalent of the Nobel Prize, for his lifetime contribution to education. In 2012, he received the Global Education Award for his outstanding contribution to education, as well as Bhutan’s Druk Thuksey Institutional Award, and in 2016, a Distinguished Service Award for his pioneering work in education. 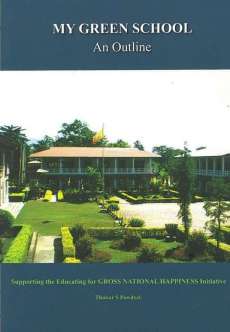 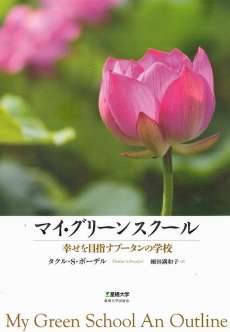 The Japanese translation of My Green School

“It is not only my message that My Green School tries to communicate. It is the message of my country,” Powdyel  has said of his book. “It is the message of Bhutan because deep at the heart of My Green School is the great vision of development called Gross National Happiness, articulated and gifted to us and the world by His Majesty the Fourth King Jigme Singye Wangchuck.” (Daily Bhutan)

Bhutan’s philosophy of GNH was introduced in the late 1970s, drawing inspiration from the kingdom’s traditional Buddhist culture. An alternative to traditional metrics for measuring national development, such as gross national product (GNP) or gross domestic product (GDP), GNH is founded on four underlying principles or “pillars:” good governance, sustainable socio-economic development, the preservation and promotion of culture, and environmental conservation. While not opposed to material development or economic progress, GNH rejects the pursuit of economic growth as the ultimate good, instead seeking to cultivate a more holistic approach to balanced development and societal well-being, translating cultural and social priorities into developmental goals to create a happier, more equitable society.

Powdyel explained that the Bhutanese government’s focus on achieving balance between the material and non-material was achieved by adhering to the four pillars of GNH: sustainable socio-economic development, environmental conservation, cultural preservation and promotion, and good governance.

Powdyel continued: “As you look around the world, there’s so much going on in the name of education, but not much of it is educational. Education is such a large engagement for any society, for any country. It engages the largest number of young people around the world, and it keeps them in institutions of learning for a long time. Today, education looks only at the intellectual dimension. But we are more than the mind or the intellect.” (New Straits Times)

He noted that humans are not merely social creatures, but also cultural, emotional, and spiritual beings: “We have aesthetic sensibilities and ethical dimensions to our lives.” (New Straits Times)

Powdyel explained that the “green school” concept is founded on the fundamental elements of the natural world, beginning with the greenery that surrounds and sustains us. The other elements, he added, are academics, aesthetics, culture, intellect, morality, society, and spirituality.

“Being able to appreciate this Earth on which we walk is a great education because we depend on the Earth,” he stated. “Green is more than a color; it is a metaphor for everything that supports and sustains life.” (New Straits Times)