The new documentary Walk with Me, about the revered Zen teacher Thich Nhat Hanh and his Plum Village monastic community, premiered at the prestigious South by Southwest festival (SXSW) in Austin, Texas earlier this week.

The documentary, directed by Marc J. Francis and Max Pugh, gives an insightful glimpse into monastic life by combining unique footage from Plum Village, shot over a three-year period, with readings from Thich Nhat Hanh’s journals by Benedict Cumberbatch, the Emmy Award-winning star of Britain’s Sherlock television series and Oscar-nominee for The Imitation Game (2014). As the documentary follows the life of the community through the turning seasons, viewers are invited to join the monastics’ journey in everyday life and their pursuit of peace within themselves and with their environment.

The Thich Nhat Hanh Foundation emphasized the importance of the premiere at SXSW, a high-profile festival featuring film, interactive media, music, and related conferences, describing it as one of the “most important and influential film festivals in the film industry calendar with thousands of people attending from all over the world.” (Thich Nhat Hanh Foundation)

The documentary was screened alongside some 125 other films, which included appearances by such familiar names as the Muppets, American author Armistead Maupin, and American science educator and TV presenter Bill Nye. 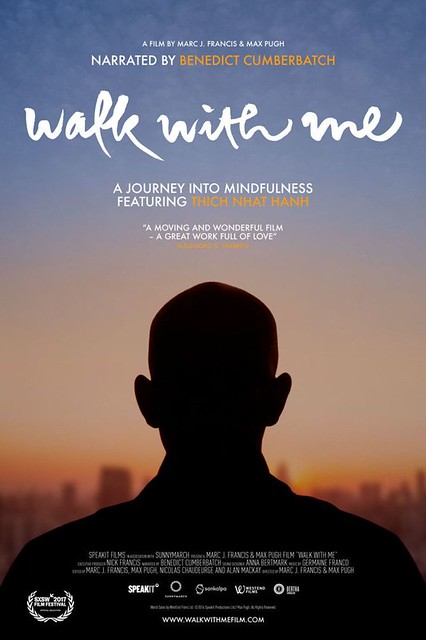 To generate publicity, not only for the documentary, but also for Buddhism and the practice of mindfulness, the Thich Nhat Hanh Foundation brought in a public relations team and was present at the screening and subsequent discussions with several monastics, some of whom appear in the documentary.

In an announcement on its website, the foundation expressed hope that the premiere would mark the beginning of continued success for the documentary, through which they hope to raise the profile of Buddhism and the practice of mindfulness in a contemporary and accessible way: “We live in a world where mass media ever increasingly waters seeds of turmoil, intolerance, and uncertainty. Now, more than ever, there is a need for all of us to live in a way that makes peace possible, that shows we do not have to live in fear or despair. This film is a piece of mindful media that can water positive messages in our society.” (Thich Nhat Hanh Foundation)

Sister An Nghiem (Sister Peace), a member of the Plum Village monastic community who is featured in the documentary, noted that she hoped the documentary would stimulate the public to embark on their own search for peace: “Hopefully when people walk away from the film, they’ll have a broader and deeper view of what mindfulness means, and if they are so moved, they may go and find a monastery, mindfulness practice center, or sangha. Especially in these times when we need to go forward with a lot of calm and a lot of tranquility.”  (Thich Nhat Hanh Foundation)

The response to the documentary has been positive. Oscar-winning director Alejandro Inarritu (Amores perros (2000), The Revenant (2015)), himself a practitioner of mindfulness, described the documentary as “silent and pure,” with “images and sound that translate the forgotten conciseness, [putting it] right there on the screen.” The director also commended the film for showcasing the “quiet voice so underrated today and ironically so needed in this time of fear and ignorance.” (Yahoo! Movies)

The documentary was screened on 12, 13, and 15 March at SXSW, which is running from 10–19 March. The Thich Nhat Hanh Foundation said in a statement that it is working together with distributor West End Films to facilitate the release of the film in cinemas worldwide.