Anchored in Strength and Compassion: Stories that Transform I have no idea what the solution can be but I’ve learned to trust my actions. I offer the beginning of a suggestion, or a recognition of what’s happening, or maybe some kindness. Most of the time someone else will then offer something, and the group will start to shift as we respond to each other. In the middle of everything, a “knowing” comes, not a solution, but a way of navigating the territory. — Liu Yingzhao

Liu Yinzhao is an executive in Silicon Valley, California, who lives in a Buddhist community an hour’s commute away. I read about the influence of her spiritual practice on her work (as director of user experience design at LinkedIn) on Buddhistdoor Global,* as part of the 2018 special issue Women of Buddhism. The quote above appeals to me; her words mirror my experience of working things out effectively and harmoniously in a group, by relaxing the “me” that wants control and instead trusting in a process of collective emergence. It’s heartening to hear stories of others who consciously pursue this respectful, improvisatory, and kindly way of going about finding solutions. It’s a radically different kind of story from the culturally prevailing one, which paints “power over” as the best way to achieve an individual’s goals.

We are all shaped by the stories that we regularly imbibe and I want to pay more attention to what I expose myself to. That’s part of my New Year’s intentions: being more discerning about what and how much I read and watch. I recently took part in a couple of five-day online Zoom retreats in which the leader encouraged everyone to carefully choose the input to which we expose ourselves. A retreat at home highlights the habits we have fallen into and I noticed a little pang of withdrawal at the thought of not watching the next episode of the TV series His Dark Materials in the evening. The results of even a few days of screen fast (not counting the Zoom screen, out of necessity) were less distraction in meditation, a sense of being more in charge of my life, greater clarity about my priorities, and more sensitivity to beauty and enjoyment. 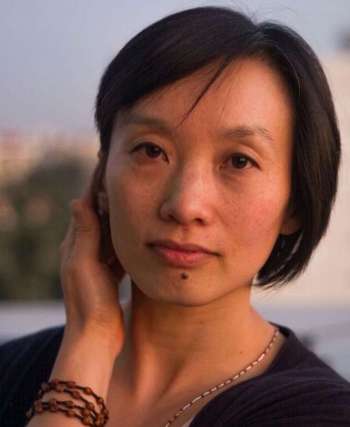 To be honest, I will probably still sometimes consume some of the films and TV series available on mainstream outlets, simply because it’s comforting to fall back onto the kinds of stories we have all been used to since childhood: stories of good and evil; envy, revenge, and power; misguided ambitions, etc. The settings and costumes can be a feast for the senses, and after a few episodes the actors almost become family. But more and more often I find myself skipping over scenes depicting violence, or I abandon a program altogether because it feels like an assault to a mind that is ethically sensitized through meditation.

Finding Liu’s story required a little active research, an effort I am glad to have made. It took me to other inspiring women writers who meditate, such as Ruth Ozeki and Elizabeth Lesser. Lesser has written a book called Cassandra Speaks that looks at how “the human story changes when women are the storytellers.” She describes how she came across a box of books left by her son who had just graduated from St. John’s College, which is also

known as the “Great Books School” because over the course of four years, every student reads the same hundred books, the “canon of Western thought.” They were almost exclusively by “dead white men” and “shockingly misogynistic,” says Lesser. Then she pulled out a book that had been on the bestseller list a few years back: The 48 Laws of Power by Robert Greene. He had synthesized centuries of thought from “masters of power,” such as Machiavelli, Mao Tse-tung, and Socrates. Law #2: Never put too much trust in friends, learn how to use enemies. Law #4: Always say less than necessary. Law #7: Get others to do the work for you, but always take the credit. Law #17: Keep others in suspended terror: cultivate an air of unpredictability.

I wanted to know what the other laws were; maybe the author was unduly selective? I found an animated version of the 48 laws on YouTube, with almost nine million views. Law #3: Conceal your intentions. Law #6: Court attention at all costs. Law #11: Learn to keep people dependent on you. Law #12: Use selective honesty to disarm your victim. And so on. . . . I don’t want to put too much of this content into your mind, even if it is likely to be there anyway, embedded into the deep strata of our conditioning. So this is what individuals in positions of power feed on! I feel sorry for these feared and lonely kings and queens of doomed empires, and sorry for the enormous suffering that follows in the wake of their actions.

What would be the culturally imparted stories of power if the female principle was also represented? If, in Lesser’s words, we would not “only revere the strong and silent type; it would also be cool to be talkative, brave to cry, noble to feel and relate.” I was deeply touched by a story she tells about a woman called Antoinette Tuff and I hope that passing the story on to you will help to root it in my memory, and maybe in yours too, as an example of courage we can draw on when confronted by violence. Antoinette Tuff was the bookkeeper at an Atlanta elementary school who prevented another massive school shooting in 2013. For an hour, she stayed with the deranged 20-year-old gunman in a small room and talked to him, dissuading him from using his loaded rifle on the hundreds of children right outside. Although Tuff had several opportunities to escape, she kept up the connection with the would-be shooter, “anchored to her own strength and letting empathy and connection lead the way,” as she described later. “I just let him know he wasn’t alone. I kept saying, baby, we don’t want you to die today. You belong to us. Just put your gun down. I won’t let anyone hurt you.” And that’s what happened: the gunman put down his weapon and the SWAT team came in gently to take him away.

Anchored in strength and compassion. That sounds like a good motto for the difficult times in which we live. I have my own close-escape story. About 20 years ago, on a wet and windy spring day on the River Kelvin walkway in Glasgow, I was confronted by a

young man with a cleaver who demanded my bag. As it happened, I was on the way to the bank to deposit several hundred pounds, the hard-earned income from months of teaching yoga (this was in the days before direct banking). I didn’t want to hand that money over to him if I could avoid it. Interestingly, I had actually approached the man just minutes before, asking whether he needed help as he seemed lost. Maybe it was this basically kind orientation that gave me the confidence to do just what Tuff had done—root into my strength, stand my ground, and reach across to him by talking gently. “You don’t have to do this.” He ran away as others approached.

Positive stories are around, if we know how to look. I am subscribed to the magazine Positive News and regularly read about individuals and small organizations contributing to a fairer and more sustainable world. It’s by no means only women who are doing their best to help shift the patriarchal and capitalist paradigm, both through inner work and activism.

We don’t have to be special or original in order to play our part. We don’t have to be high earners in Silicon Valley, or decorated authors, or ordained Buddhists. What we do need is a clear sense of our moral compass and inspiring stories that bed us into a community of like-minded people. We need to find and treasure, tell and retell, the stories that truly move us, as well as resisting the lure of stories that only propagate greed and violence.

An important element of the stories that I keep close to my heart is the wisdom to hold those very stories and the views expressed in them lightly. It is not worth falling out with our fellow human beings over different views on politics, religion, or COVID-19 and vaccination. Important and inevitable as stories are, they are just that, stories. How things really are is ultimately beyond the grasp of words and reason, and can only be understood by the heart. So let’s keep our hearts open.

What are the stories that gladden and embolden you to be all that you can be? I would love to read it here, if you would like to share them.

Women in Buddhism: Breaking Gender Stereotypes
Integrating Dharma Practice in Spanish: An Interview with Venerable Dhammadīpa Samaneri
Acknowledging Anger and Developing Compassion
The Fiction of the Self: Ruth Ozeki

More from Bringing Mindfulness to Life by Ratnadevi