Dhyana to Thien: Echoes from the Past—From India to Tran Nhon Tong Portrait of the devout King Tran Nhan Tong. Image courtesy of the author

In 1292, King Tran Nhan Tong (1258–1308), a great Buddhist scholar, abdicated the throne and became the founder of the Vietnamese Buddhist school Truc Lam (Bamboo Grove) at Mount Yen Tu, which played an important role in the victorious career of the nation. The king was consecrated as the first patriarch. The three Chan sects founded by Vinitaruchi, an Indian (d. 594), Vo-Ngon-Thong, from China (d. 826), and Thao-Duong, also from China (d. c. 1100) were unified. The Vietnamese went on to create an independent form of Buddhism, focusing on mental cultivation, speechless understanding, and hermitage life. They took delight in the Dharma while dwelling in the world. Prof. Shashi Bala at the pagoda of the devout King Tran Nhan Tong celebrating his birth and nirvana. Image courtesy of the author

The philosophy of dhyana is called Chan in China and Zen in Japan, all being similarly related to jhana in Pali. However, in Vietnam the term is Thien, which seems to have been directly derived from the Sanskrit term dhyana. Buddhist monks, nuns, government officials, and devotees offered prayers on the 760th birth anniversary and 710th year of the nirvana of King Tran Nhan Tong at the pagoda on Yen Tu Mountain. Image courtesy of the author

Vinitaruchi translated a few sutras, one of them being Tong-tri. According to his philosophy, the mind sign was a symbol of the transmission from master to pupil, when the pupil gains truth under the master’s initiation. The Vo Ngon Thong school considered “Perfection of Wisdom” (Prajnaparamita) literature as the basis that advocated sudden enlightenment, mind ground, and non-attachment to realization. After that, one realizes that all things have neither a separate reality of their own, nor a non-separate reality. His school preached repeating the name of the Buddha through mind and speech to extirpate one’s evil karma.

Thao Duong was given the title of national teacher and charged with teaching Thien practices and Buddhist philosophy in the royal palace. He preached rhythmic chanting of the Buddha’s name and intensive koan practice. In this way the mind is at all times aimed at realizing one goal—inner realization of the Pure Land, eliminating self-clinging and allowing one to attain nirvana. Thus, meditation and recitation went together. Kings from the 11th–13th centuries supported the propagation of Thien Buddhism in its development from a national to a nationalist religion. The apogee of this movement was the founding of the Truc Lam Thien school by King Tran Nhan Tong.

The theory of knowledge developed by Vinitaruchi is based on his own experiences. Mindfulness practice prepares the body and brain for enlightenment, both for the monks and lay Buddhists. The Buddha is popularly venerated as Shakyamuni (Sage of the Shakyas).

His path of contemplation is described as mauneyam (silence) in the Mahavyutpatti, The Great Volume of Precise Understanding, compiled in Tibet in the eighth and ninth centuries. Muni means sage—an ascetic, a seer, a monk, a devotee, a hermit, one who is moved by inward impulse, a person who has taken a vow of silence, the internal monitor or conscience. 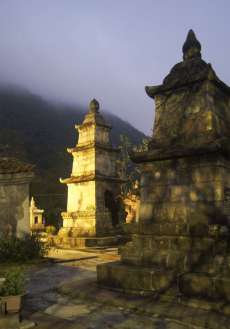 The pagoda at Yen Tu Mountain. Image courtesy of the author

Koans are riddles to train the mind, making a person mindful so that philosophical ideas need not be told directly by first putting the mind on the path of thinking. Through training the mind with mindfulness, the body and brain are prepared for enlightenment. Koans present playful discussions of theological questions and problems. One can see several such riddles in Dharma talks like passing through a gateless gate. According to Thien philosophy, “one should not generate a mind based on any object.” It connotes the Upanishadic idea of “not this, not this.”

In the Thien Buddhist tradition, all human beings possess the potential to become a buddha, a truth that can be realized through meditation. To achieve this, one’s preoccupations and attachments must be removed. Both the Vedic tradition and Chan Buddhism point to the realization of one’s inherent divine spark directly.

The founder of the Tran dynasty used dialogue as a tool for the transmission of philosophy from teacher to disciple. The school was established as the first Buddhist community in medieval Vietnam, giving rise to a high Buddhist culture for aristocrats. The Upanishads are written in a dialogical style to aid the reader in comprehending the ultimate reality, helping human beings to transcend physically, vitally, mentally, intellectually, and blissfully.

Bodhidharma, who transmitted dhyana to China, combined it with martial arts and performed its feats. The monks of the Shaolin Monastery today are renowned for their martial arts skills. Such Chan monasteries often played a valuable role in times of instabilit, inspiring later generations. King Nhan Tong himself was inspired, and would go on to defeat the Mongol invaders in 1285 and 1288 before becoming a monk and founding the Truc Lam lineage. Prof. Shashi Bala attending the conference that was organised as a part of the celebrations of the birth and nirvana of the Buddhist king of Vietnam. Image courtesy of the author

The Truc Lam school of Buddhism has a distinct identity that echoes a philosophy dating back some 5,000 years, inspiring people to realize the self, look within, and live the simple life of a hermit, focusing on mental cultivation, liberating themselves from the bonds of suffering, identifying the self with the Brahman, and eliminating self-clinging to attain nirvana. It prefers to follow the dialogical style of the Upanishads, a master-disciple lineage using koans to train one’s mind to comprehend the profound philosophy of transcendence in life.