During the months of January and February (culminating with Losar, the Tibetan New Year), the Buddhist center where we live hosts a series of teaching events and ceremonies. At this time of year, many Brazilians can take time off work to participate in retreats due to their end-of-year holidays and also because many work places close during celebrations for the Carnaval do Brasil (this year 24 February­–1 March. The teachers at our center have often commented how inspiring it is that so many students choose to use their holidays to engage in spiritual practice instead of spending time at the beach or participating in the festivities.

A number of families were recently at the center to participate in the events there. For two weeks, one father cared for his one-year-old daughter while his wife underwent a strict schedule of contemplation and teachings. Meeting during the breaks, the daughter would cling to her mother and during the practice sessions she played with her father, who diligently ensured she was happy and maintained a daily routine. Passing them, I would rejoice, knowing well the effort it takes to support a partner during their retreat while keeping a little one happy away from home.

Another couple shared time, each allowing the other to participate in half a day of the retreat while their four-year-old adapted easily and would, from time to time, prance into the shrine room to retrieve crayons from the colorful bag stowed under her parents seat. My own children had a babysitter for part of the day so that my husband and I could both attend the teachings. Amaya is now old enough that she could join the older children who played around the temple grounds as their parents sat in the temple. Most of the day she was with a new friend, a little girl from Chile, whose mother was also attending the retreat. Amaya and her friend do not speak the same language, but found that they have a shared love of climbing trees. They spent hours perched in a very giving tree near the dining room. 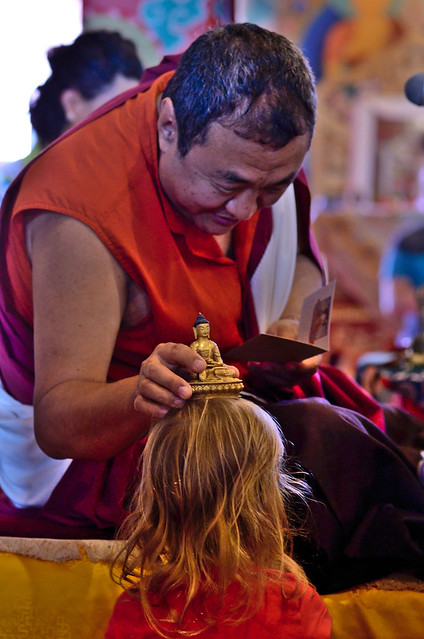 This scene probably sounds almost romantic and relaxing, however with four sessions of retreat per day and the constant demands of parenting, it takes a lot of determination to participate in retreats as a family. Toward the middle of the retreat, when I would pass another parent preparing to return to the temple and organizing the logistics of the following hours for their children, it felt like passing a fellow solider struggling to maintain an orderly routine. By the end of the retreat, I noticed that Leela and other smaller children would be running around half dressed in the heat, some with unkempt hair.

When we bring our children to a teaching retreat there are so many factors and logistics to consider. Of course, we wish to deepen our own understanding of our Buddhist practice and dedicate time to meditation, and from our own experience of the benefit that comes from the Buddhist teachings, we wish that our children can form a connection and are near this source of benefit. However, we parents also need to be aware that there are many people attending who do not have children and who have traveled far and made financial sacrifices to attend the retreat, and we do not want our children to cause distraction or unwanted noise during the teaching sessions. If my children start making a disturbance, I try to take them out immediately, however if it is during a ceremony I am less strict so that they enjoy being inside the temple and are able to hear the chanting and prayers.

Chagdud Rinpoche’s son, Jigme Tromge Rinpoche, who has been presiding over the events and bestowing teachings these past months, offered a Refuge ceremony for those who wished to formally become Buddhists. A few of the sangha children really wanted to participate in the ceremony and arrived dressed up and determined to sit quietly with the adults. Their younger friends who had been playing around the temple outside saw them enter and decided that they too wanted to take refuge. It was a real challenge for us parents to keep the group of about eight children ranging from 3–7 years old quiet, as we were all concerned about not disrupting the adult participants. The refuge ceremony was very moving as Jigme Tromge Rinpoche explained with care the qualities of the Three Jewels—the Buddha, the Dharma, and the Sangha—and the meaning of taking refuge and the related vows.

I hovered around the children, hushing them and producing cookies to keep them quiet. The little sangha was so pleased to be together that they could not help but chat and play. At one moment my daughters ran outside again and I thought that it would be better not to go back inside as it could be disruptive, but another parent came and ushered his children in and mine followed, promising to use their quiet voices. I was feeling conflicted about whether it was appropriate to have the children there, but as we entered Jigme Rinpoche beamed a beautiful smile seeing the children in the doorway again. Children tree-climbing near the temple dining room. Image courtesy of the author

When the time came for the congregation to receive their refuge names and have a little piece of their hair cut off, Rinpoche asked the children to come up first. They all lined up before him and, one by one, respectfully went to receive their names. Leela pushed free from my arms and squeezed in the line next to her sister, placing her hands in the gesture of prayer.

The children then left the temple delighted and they seemed proud of themselves. The parents and other adults were all touched by Rinpoche’s gentle care and attention for the next generation. Outside, I asked the children, “Do you understand what it means to take a refuge vow? A little boy replied: “Not to harm anyone,” and another child said: “The Buddha is my teacher.”

It is these moments that make all the tension and juggling of logistics to be a family in retreat worth every moment. I hope that more and more Dharma families consider ways to integrate their children, even though it is rarely an easy task!