All smiles at one of SCC's Livelihood Centers in Siem Reap

Staring blankly into space, Pat Sorm sits on the steps of her house, hugging a photo of her son who died just a week earlier. Khon Kha was working in the military and had just turned 40. He had battled with AIDS for the last 10 years of his life. A funeral ceremony was performed in a simple, yet dignified manner, with support from a donation of US$30 that Pat Sorm received from the Salvation Centre Cambodia (SCC). Cremation alone had cost some US$50, but she was at least comforted that the proper Buddhist rituals would allow her son to move on in peace.

Since 1994, the SCC has been working with people living with HIV/AIDS (PLHA) and their families in hundreds of villages in three provinces—Phnom Penh, Siem Reap, and Battambang. The beneficiaries come from very poor communities with poor access to education, that are among the country’s most vulnerable and marginalized. Working closely with local community leaders, SCC identifies those most in need and the challenges they face, such as food insecurity, land and housing problems, and means of livelihood. 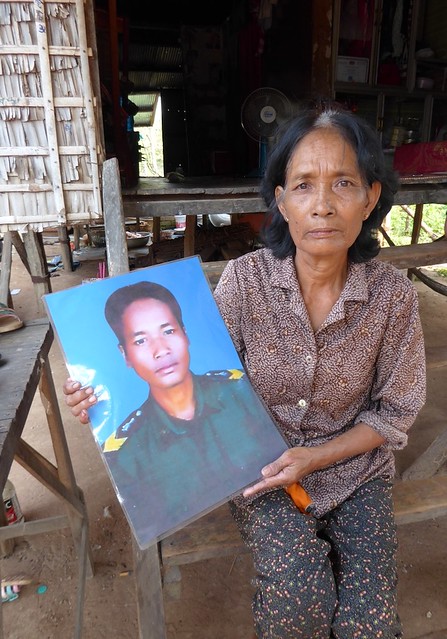 Pat Sorm holds a picture of her late son

As many patients are adult males of working age, HIV and AIDS mean a loss of income when the main breadwinner can no longer work. In addition to the expensive burden of medical care, other family members are forced to stop working to care for the sick, especially those in the terminal stages of AIDS. Elderly parents struggle to find the money to pay for their children’s treatment, and young children abandon school in a bid to earn a meager income to help support the family. Many girls put themselves at risk by going into prostitution. Families become poverty-stricken, and many end up selling off their assets and sinking into debt.

Because the burden from HIV/AIDS does not stop with the individual, but impacts the whole family and the community, SSC adopts a holistic approach, with intervention at many levels to enable those affected to live with freedom and dignity—encompassing treatment, AIDS care, prevention, advocacy, stigma reduction, livelihood activities, nutrition support, gender and human rights education infrastructure, and community empowerment. Financial aid for a family suffering from HIV For example, under SCC’s scheme, patients who come to the hospital for treatment receive not only medication and education on AIDS care, but also a transportation allowance to enable them to make the journey for treatment. Support for daily necessities, such as food coupons, household items, and building materials, also help to relieve the burden of meeting daily needs. In addition, the funeral assistance program helps poor families conduct proper rites for those who die as a result of HIV or AIDS.

One of the main problems faced by PLHA and their families is stigmatization and social and economic exclusion due to insufficient knowledge about the disease, or by gender stereotypes. To overcome this, SCC focuses on strengthening the rights of those affected, working to eliminate stigma and discrimination. Livelihood programs, self-help schemes, and vocational training help patients to develop self-esteem by being independent and self-supporting, and re-integrating into society to lead meaningful lives. In 2004, Chi Chamnan was diagnosed HIV-positive. Her husband had died in 1998 and shortly afterwards her daughter passed. Sickly, ashamed, and fearful, and with no means to fend for herself, life for the 42-year-old widow looked bleak. But with the support services of SCC in the Ekphom District of Battambang, such as referral to a healthcare service, regular home-based care, Buddhist counseling, meditation instruction, and monthly World Food Program aid, Chi Chamnan has managed to rebuild her life. With a start-up capital of US$100, she has even started a small sewing business through which she is able to support herself. She now lives a normal, happy life, and had re-engaged with society, occasionally participating in wedding receptions and other ceremonies in the village. Orphans and vulnerable children often suffer the most from stigmatization and discrimination. They are often teased and taunted because their parents have HIV/AIDS, and rejected by schools and communities. In emphasizing the rights of the child, SCC’s basic education program offers supplementary classes to children who attend public schools and to those who are excluded from public education for economic or social reasons, running primary education classes (grades 4–6) in the three provinces. In addition to academic subjects and basic health and hygiene practices, children are encouraged to express their creativity through art, dance, music, farming, and other fun activities. At a school in Siem Reap, for example, a traditional musical group has been formed and is often invited to perform at temple and village functions.

From its roots as a small organization, SCC has made an impressive transition to become one of Cambodia’s most outstanding NGOs dealing with HIV/AIDS. Its success can be attributed to strong leadership, a dedicated and hardworking staff of 80 people, and strategic collaboration with a network of monks and nuns. 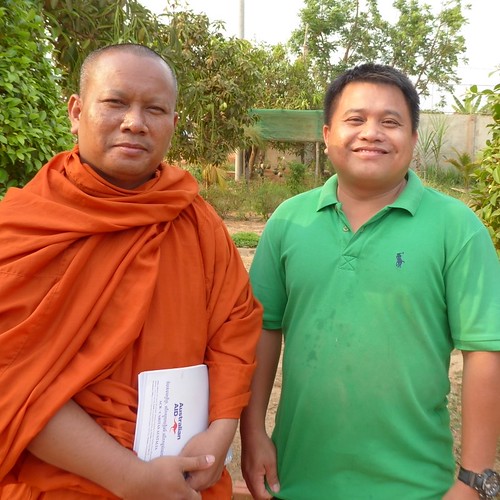 In fact, the rationale and potential from working with monks and nuns, and the infrastructure provided by the many pagodas is well-recognized by SCC and many other organizations involved in the fight against HIV/AIDS in Cambodia. Despite the country’s turbulent history and Buddhism’s near extinction at the hands of the Khmer Rouge, Buddhism continues to be a vital force in Cambodian society. Buddhists form 95 per cent of the population, and there are an estimated 56,000 monks and 4,500 temples across the country.* In every village, there is always a wat (temple) that serves as the nucleus of the community and sometimes as the provider of the village’s spiritual, educational, health, and social needs. Many monks and nuns act as teachers and community leaders, providing mental, spiritual, and social support. Monks command much respect and have considerable influence within the community, and the close relationship between the temple, the monks, and the surrounding community provides wide-ranging opportunities for HIV/AIDS programs. Ven Eng, 72, is a counsellor at SCC and a role model for women and nuns in Cambodian society

Adopting a train-the-trainer approach, SSC works with a core group of monks who have successfully undergone training in the field with HIV/AIDS and are able to cascade their knowledge and expertise throughout the monastic sangha to maximum effect. To date, SCC has trained more than 300 monks and nuns who, armed with the Buddha’s teachings and training in HIV/AIDS responses, venture into communities to encourage villagers to go for testing and seek medical treatment, raise awareness of the dangers of HIV/AIDS through Dhamma discourses, and reduce stigmatization by educating communities. Because of the respect accorded to monks and nuns, they confer status and dignity to people who are otherwise liable to be stigmatized. Above all, the monks and nuns integrate Buddhist principles, meditation instruction, and psychological care to help those suffering to come to terms with their conditions and to attain peace of mind. Through the concerted efforts of a strong network of national and non-government agencies like SCC, and other community-based organizations and faith-based groups, the incidence of HIV in Cambodia has been reduced by 67 per cent since 2005 to about 1,000 new cases per year, while the prevalence of infection has dropped from an all-time high of 2.4 per cent in 1998 to 0.6 per cent as of 2015. Of the 75,000 infected cases, 75 per cent are receiving antiretroviral therapy, placing Cambodia in the top league of countries “with a successful AIDS response [that] continues year by year to make steady progress in reducing new HIV infections and expanding access to HIV treatment with progressive policies and good practice.”** For the staff at SCC, these achievements are a strong motivation for them to strengthen their work in eradicating the suffering caused by HIV/AIDS. As director Tep Monyrotha states, SCC’s goal is “By the end of 2018, vulnerable families and the poorest of the poor in the target areas can live without discrimination, livelihood, and health status are well enhanced, and all children can access their education as well to live in safety as others.”

Undoubtedly there will be challenges ahead, but with the insight and the blessings of the Buddha on their side, SCC’s goal may just be within reach!

All images courtesy of the author

* National Review of Faith-Based Responses to HIV in Cambodia, A joint initiative of the National AIDS Authority   and the Ministry of Cult and Religion, 2011