Imagine that you lived a few hundred or even a few thousand years ago. If you had told people then that there are going to be bad times for a while and that good times will follow, and the ups and down will continue, it’s almost certain that your words would withstand the test of time and you might be remembered as a wise person who could predict the future of nations. This has to do with fact that almost every country in the world goes through ebbs and flows of well-being. Today, we are facing an unprecedented situation in which no one can predict the future of humanity at large. It’s not a great time for anyone who wants to be a wise man or woman giving predictions to dispel the public’s fear of the unknown. It seems that our brains have a bias against the unknown and constantly seek certainty. These neurological traits are very difficult to change. By comparison being a fortune teller or palm reader in the modern day would be a much easier job since their work only involves predicting the future for individuals.

There have been times when prosperity and peace have been relatively abundant in the world. On the other hand, there are also dark chapters in our history filled with war, genocide, famine, plague, and social unrest. The Black Death alone wiped out half of Europe’s population. In the 20th century, countless people lost their lives in terrible events such as mass famine. Many cases of famine are not caused by natural disasters, but by economic mismanagement or by one group using hunger as a tool to suppress another. During the Ukrainian Holodomor, for example, politically enforced starvation took the lives of millions.

Sometimes, all we can do is to let our heart break open in compassion, and not allow it to be lost in the trap of denial or despondency. Each of us must learn to be Avalokiteshvara, who gazes upon the universe with eyes of love, and to not close them when we see a picture of the world that is ugly. The world is also filled with so much beauty. It is important for us to open our hearts to this unbearably beautiful world, its ceaseless magic manifesting through nature’s wonders, and humanity’s good hearts, love, compassion, selflessness, along with our creations such as art, music, poetry, spirituality, and so forth.

There are also good times in history in which many have enjoyed peace, prosperity, and rich cultural development. Yet now perhaps the best time for many people to be alive, even though there seems to be a collective nostalgia for the past; the rosy imagination that there was once a better, golden age in which people were more evolved and the Earth more similar to heaven. For many, they will hold onto this vision until NASA or some institute comes up with a time machine and starts sending people to the past who come back with the opposite report!

As an honest observer, there is whole list of good things from this time that we can rhapsodize about. In our lifetime, some countries have made huge progress within a short period, lifting millions from extreme poverty and enabling their citizens to enjoy a higher living standard, equal rights, access to education, and political freedom. South Korea, for example, whose GDP was among the lowest in the 1950s, has now reached the stardom of the first world and its citizens enjoy the blessings of a true democracy. Despite these encouraging signs, we have already arrived at a point of not having any more absolute guarantees of the continuation and longevity of this relative golden era.

There is an illusion that we must dispel: the idea that we can continue to enjoy the so-called “progress” in which everyone is sooner or later going to be educated, our backward customs will vanish from the face of the Earth, and that scientific and technological achievements are going to eradicate all unwanted scenarios. This concept couples with conquering nature by consuming as much of our shared resources as possible and being careless about the health of planet and the fragile species that live upon it, making as much profit as possible to feed our ever-growing desires.

The truth is our very existence is in more danger than ever. This is a reality that many refuse to believe or prefer to push back into the dark recesses of their minds so that they can live in a sweet bubble, comforted by the false optimism of “it’s not going to happen to us.” Such danger comes mainly from the exhaustion of natural resources, and natural disasters caused by climate change and our addiction to fossil fuels, which in turn can create unimaginable havoc; worldwide calamities from which nobody can easily escape. Let’s not talk about how many political institutions are going in the wrong direction with their openly populist manifestos that exclude the disenfranchised, and serve only the more fortunate. Ruminating on these simultaneous problems would be too much for us to bear. 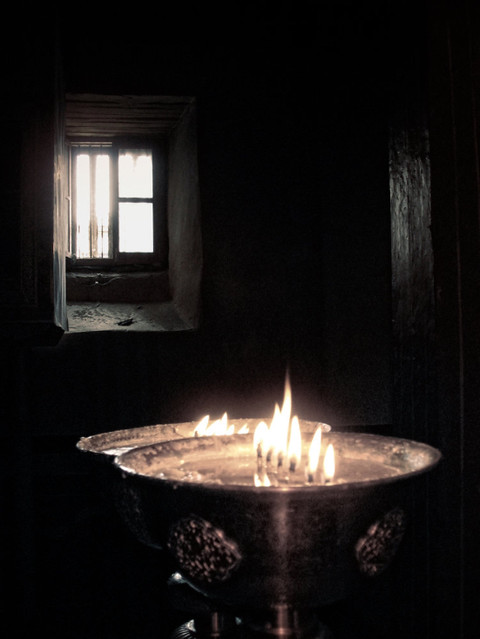 Photo by Craig Lewis. From newlightdreams.com

There are two main schools of thought these days, both of which tend to be quite confident in their doctrines. One asserts that we humans are veering blindly toward existential danger, like a drunken man driving toward a cliff while singing joyously. The other states that we can continue with business as usual and there is no such danger; if there might be the slightest chance of it, we’re not responsible for nature’s erratic behavior and so we should continue to conquer the natural world to make more profit. The truth is that we don’t have infallible omniscience that can tell what the future holds for us, for our children, and for their children. Maybe things are going to work out and the world will keep getting better, or the world could take a turn in the opposite direction. This is a time for us to turn toward the Buddha’s wisdom to find some answers.

Buddhism teaches that all compounded things are impermanent. This is neither optimistic nor pessimistic. It shows us the unbiased nature of reality. Anitya, or the law of impermanence, is not a lofty theory, but a living truth reminding us that there is no such reality, neither security nor certainly. It teaches us how to live in harmony with uncertainty and not to become bogged down by anxiety. It beckons us to live in the present moment and to learn to enjoy this precious life every day, while knowing that there is no solid ground under our feet. At the same time, it beseeches all of us to cultivate an altruistic heart and to try our best to help our human brothers and sisters, and our beloved planet as a true universal moral act.

One doesn’t have to a VIP to be a force for positive change. It begins with small acts: putting containers in our homes for recycling, wasting nothing with a constant practice of conscientiousness—what we might like to call ecological apramada. Apramada is a form of carefulness taught in the Buddhist tradition that prevents us from falling to prey to our unwholesome habits. If enough people do these simple tasks, as well as taking bigger actions to change our way of life, there could yet be a window of opportunity to leave a healthy environment as a gift to those who will be forced to inherit what we leave behind.

The most important thing to remember is that there is one human family and we must all share our sorrow and happiness, hardship and glory, together. Borders and divisions are illusory patterns that only appear in the hallucinations of our self-centered ego. In the awakened heart of a bodhisattva, all beings are interrelated and one is genuinely compelled to seek the happiness of all, without exception.

May all beings be happy!

Happiness Before Profit: Bhutan Seeks to Redefine Business Using Buddhist Values
A Call for Meditation in Action on Climate Change
A Humanitarian Action for Other Living Beings: Creating Space for Urban Biodiversity through Buddhist Gardening
Wildlife on the Brink