The First in 1,000 Years: An Interview with Venerable Kusuma In 1996, Venerable Dr. Kusuma became the first Buddhist nun in 10 centuries to ordain in Sri Lanka. She later established a meditation center, wrote several books, and has given Dharma talks all over the world. An advocate of women’s ordination, Ven. Dr. Kusuma is credited with helping to revive the Theravada monastic tradition for Sri Lankan women.

For much of her early life, Kusuma Devendra was an academic. She studied molecular biology in the United States and taught science and English at university. Feeling that science could not answer all her questions, she turned to Buddhism. She obtained two PhDs, one on Sri Lankan nuns and one on the Vinaya, or monastic regulatory framework. Her studies taught her that women had been ordained as bhikkhunis since the days of Mahapajapati, the Buddha’s mother; and that though that lineage had died out in Sri Lanka, it was alive and well elsewhere. She traveled to South Korea and Taiwan to study those living lineages, and in a controversial ceremony, she formally took her vows in India with nine other women, overseen by Korean sisters. She and her cohort became the first Theravada nuns in 1,000 years.

Now 88 years old and the founder and abbot of the Ayya Khema Meditation Center, Ven. Dr. Kusuma spoke to us about her ordination ceremony and her hopes for the future of Buddhist nuns.

Buddhistdoor Global: Were you worried about re-establishing the bhikkhuni sangha in Sri Lanka?

Venerable Dr. Bhikkhuni Kusuma:  I worked toward the establishment of the bhikkhuni order for maybe 20 years. There was a flourishing bhikkhuni order in Sri Lanka for nearly 10 centuries and then the lineage died out. I had no idea of ordaining, but I was keen to get it re-established.

The bhikkhu [male monastic] order was well established and people are used to looking up to bhikkhus. For centuries, Sri Lanka had a very powerful tradition of bhikkhu ordination. But that also died out due to invasions, a lot of wars, being under the British, the Dutch, the Portuguese; Sri Lanka lost the bhikkhu order as well. But about 200 years ago, it was resurrected. They took Dutch ships, went to Burma and Thailand, and brought the bhikkhu lineage back. But they did not bring back the bhikkhuni order! So that’s what we were trying to do. Because the bhikkhu order is well established, recognized by the government, and there is education and support from the entire Buddhist community, it has been functioning successfully up to today. However, the bhikkhuni order was unheard of. It was quite controversial.

I didn’t want to confront the hierarchy because that would mean that I would get into trouble personally. For 20 years I had conducted many ordinations, but privately, without any publicity. There was a silent understanding. [Before my ordination] I got books printed with my name written as Bhikkhuni Kusuma, but nobody confronted me. There wasn’t a big opposition; we were in the minority, and the monks didn’t feel that we were a challenge. I thought: it is tradition, and it takes time. As time passed, when the numbers [of interested women] grew, the time would be right for us to openly ask for recognition. I was waiting.

My ordination came as a surprise even to me. Dr. Vipulasara Thero [at that time, the secretary of the World Buddhist Council, the president of the India Maha Bodhi Society, and an advocate for bhikkhuni ordination] insisted that I join the order and take up leadership because he thought that the other nine nuns were not able to face such an important international ordination by themselves.

We now have about 3,000 bhikkhunis and it was after my first ordination that the word bhikkhuni was once again known and heard in Sri Lanka! 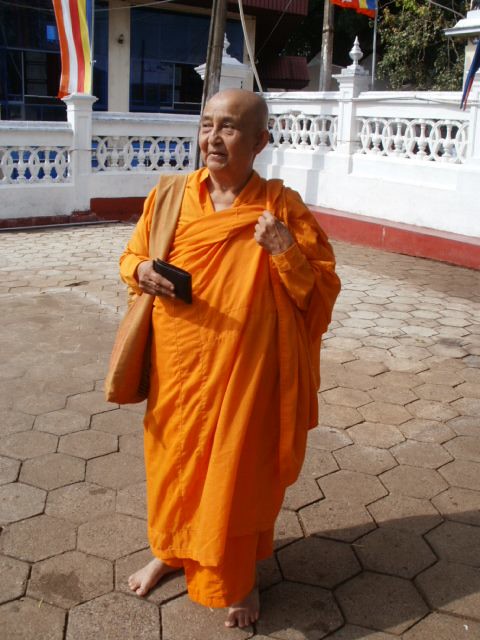 BDG: Did you encounter resistance or opposition?

VK: It was risky to start the order because the senior monks were and still are not in favor of bhikkhunis, so we did not know what kind of opposition we would be facing.

There were many who expressed their views both in favor and against bhikkhuni ordination, and the mass media made it headline news. So I was in India for two years, because it was not very safe for the 10 of us to be in Sri Lanka due to the open opposition. After two years, people had said so many things in favor and against our ordination that the questions sort of died down or were forgotten. That’s the time we decided to return to Sri Lanka.

Up to today I have not been confronted. For one thing, they [the monks] know that I know the Vinaya and the rules. When I went for my PhD, I spoke to the panel on defense of theses. They questioned me and they were quite satisfied with my grasp of the facts. I had a degree in Pali, so I was able to read in Pali, in English, and in Sinhala, so I was quite thorough with my facts. That, I believe, was the reason nobody confronted me: because I knew my facts.

BDG: You spent time in Korea to prepare for the ordination. Can you talk a little bit about what you learned from the Korean order that you took back with you to Sri Lanka?

VK: I learned so much. Their drumming and their chanting took long hours, and the place was spic and span. I was old even then, and two or three of them used to come to hold me by hand and take me to a huge spacious room that was already prepared. There would be a bowl of food and flowers all ready for me; they gave me such wonderful comfort. Dharma discussion was in Korean, but I was still listening. I knew that they kept a pure lineage. I find that the nuns’ community is extremely pious and committed.

BDG: Your original training was in science. You have said that science did not have the answers you were looking for, so you turned to Pali tradition. What is missing in science that you can find in Buddhist practice?

VK: Science only answers questions about the physical nature, not the mental nature. Buddhism gives priority to the mind. There is no scientific evidence there. There is no physical evidence there. You cannot experiment on mental phenomenon, like feelings, recognitions, perceptions, volitions, memory. That kind of thing has not been experimented or understood at all by the scientific world. Why are we born? Why are we dying? Why are we suffering? All these questions came to me and science had no answer for those. That’s why I sought answers in Buddhist philosophy. Today I feel very happy I changed because I have the best of the scientific background, and as for the physical world, it’s okay. The body? Okay. But the mind! I had to seek meditation to understand the working of the mind. 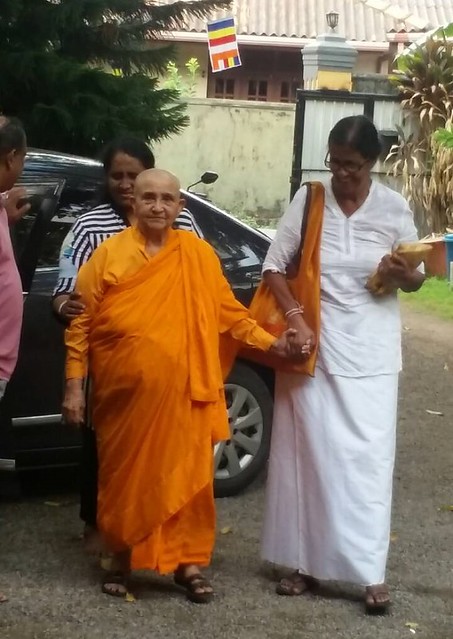 BDG: You are highly educated, and many nuns at the Ayya Khema Meditation Center also have advanced degrees. Why is education so important for nuns? What does academic training provide for bhikkhunis that is so valuable?

VK: With all this high technology and ability to transmit knowledge, the Dharma should know no language, no border. Without technology, you cannot perform at any level. Maybe on a personal level, but you can’t speak to the world. You have to speak to people in the language that is understood. Without technology, without knowledge, you can’t disseminate, you can’t spread the Dharma. You may be able to stay as a hermit in a jungle and practice meditation, but that is not the Buddhist way.

The Buddhist way is to teach and also to study. In the Dharma, we not only have to learn the theory, but also practice it, so it becomes firsthand knowledge. Until then, it is secondhand knowledge; we have read it somewhere, we have heard it somewhere. It is not convincing enough unless you put it to practice, you reap the benefits, and realize the value of it because it has sprung from your mind, your thinking, your speech, and your action. You become so pure that you understand the efficacy of the Dharma, through practical application, for you, for your neighborhood, and all those who come into contact with you. Then you can transmit this Dharma. So knowledge is very important, language, technology, so important, not only for your own edification, but also for the spread of the Dharma.

BDG: What has changed for the Theravada bhikkhuni order since your ordination?

VK: The order is still there, but it is unrecognized by the monks and the state, even today. The government does not recognize the Theravada bhikkhuni order. We are practicing according to the Theravada tradition. We don’t know Korean, we don’t know Chinese. We don’t practice according to the Mahayana rituals, but according to Theravada practices. Though we have done that for so long, the government and the advisory board to the government has not sanctioned us, so we remain unidentified. There is ongoing protest asking for the recognition of the bhikkhuni identity.

BDG: What would you like to see happen next for bhikkhuni in Sri Lanka?

VK: I wish that bhikkhunis—not only in Sri Lanka, but all over the world—will be educated, will be practicing, will be talking about the Dharma and giving that knowledge to the world. Then, it will be a different world altogether.

The Buddhist Stance on Theravada Women’s Issues: A Conversation on Gender Equality and Ethics with Ajahn Brahmali
Reviving the Bhikkhuni Sangha in Indonesia: an Interview with Ayya Santini
A Moment with Dr. A. T. Ariyaratne

More from Women in Buddhism