Waiting on the Dead 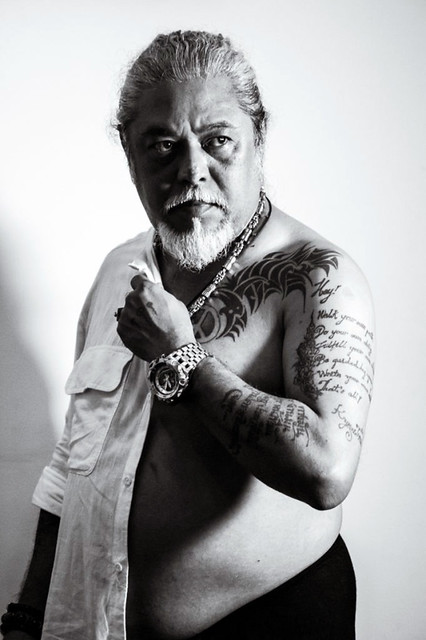 FFSS founder Kyaw Thu has his personal philosophy inscribed on
his skin: “Walk your own path. Do your own duty. Fulfil your own
obligation. Be guided by your own virtue. Write your own history.”
Image courtesy of the FFSS

With a wasted body and listless eyes, 37-year-old Pyu stares into space. Soon his prolonged battle with tuberculosis will be over. The faint chanting of Buddhist monks can be heard in the distance, as if to soothe his tormented spirit. Yet Pyu’s mind is not appeased. How can he have a “good” death when he knows not what will happen to his aged mother, his wife, and two children? Furthermore, how will they manage his funeral with no money and no help?

In Buddhist Myanmar, funerals are of the utmost importance. But for too many poor Burmese families, especially those living in Yangon, the cost of even a simple funeral is beyond their means. Many resort to taking out high-interest loans, or secretly burying their dead in a field. With escalating costs and widespread land grabbing in recent years, times are hard for both the living and the dead. As 80-year-old Ma Moe laments: “It is costly even to die. If I’m going to die, I’ll go back to my village. If I die there, at least the community will help with the funeral. I don’t want my children to owe a lot of debt because of my funeral.”

“Most people are desperately poor in this country,” says Kyaw Thu, a burly bearded man with a grey ponytail. “Traditional funeral costs are on average about US$7,500, according to a 2014 survey, and that does not include cemetery costs in Yangon, which will easily cost around another US$2,000. A typical funeral and burial costs run to at least US$9,000. And undertakers expect to be paid in full at the time of the funeral. That is impossibly unaffordable for many people.” Burying the dead has become a hefty burden for many poor Burmese, with rising costs and land grabs making traditional funerals prohibitively expensive. Image courtesy of the FFSS

No one understands the cost of dying in Myanmar better than Kyaw Thu. For the last 15 years, he has conducted thousands of funerals, served as hearse driver, pallbearer, consoled the bereaved and provided for the needy. For him, it is all part of a day’s work, yet his very presence at the funerals usually causes quite a stir. After all, he was once regarded as the Marlon Brando of Myanmar, with more than 200 films and two Myanmar Academy Awards to his credit (one for best actor in Da-Byi-Thu Ma Shwe Hta A in 1994 and one for best director on Amay No Bo in 2003). These days, however, he is more likely to be found inspecting hearses at the Free Funeral Service Society’s (FFSS) headquarters in Yangon’s Thingangyune Township. But be it as a screen idol or president and co-founder of one of Myanmar’s largest NGOs providing free funeral services for the poor, the charismatic Kyaw Thu is still immensely popular with the masses.

Kyaw Thu’s dice with the dead was cast one day when a prominent monk told his daughter about the dire fate that awaits actors after they die. “The monk said that this is because actors play with people’s emotions, make them laugh, cry, and feel anger during their movies. This is not in line with Buddhist virtues, so they will be reborn in the lower realms,” Kyaw Thu recounted. The monk’s words jolted Kyaw Thu into reviewing his life and what he was doing. One day, while visiting his mentor, the late movie director Thuka, in hospital, Kyaw Thu learned of the plight of the old woman in the next bed. “Her family visited her daily until the doctor pronounced that they should take her home because there was nothing else he could for her,” he recalled. “Then the family stopped coming to the hospital and the woman died alone and was buried in a common grave. We later learned that they had abandoned her because they did not have money to pay for her funeral.” 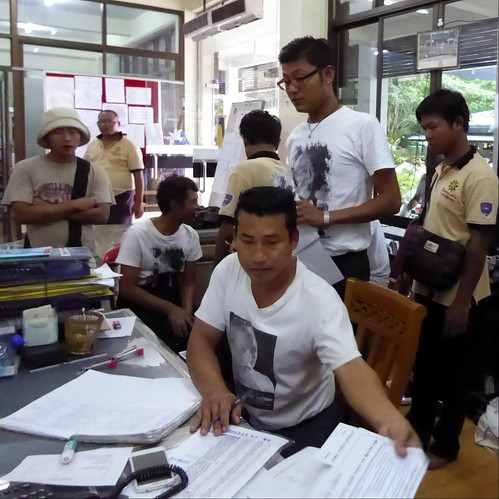 A busy day at the FFSS office. The organization is manned by 100 staff and
numerous volunteers inspired by their leader’s compassion and drive for social
change. Image courtesy of the author

As a devout Buddhist, Kyaw Thu, like his mentor Thuka, believes that funeral rites are important as they signify the passage into the next life. Moved by the plight of the poor, the two decided to set up a free funeral service to help the needy honor their loved ones with a dignified and proper funeral. On 1 January 2001, the FFSS was founded.

The early years of the FFSS were fraught with difficulties. For a start, there were cultural superstitions to overcome. It was not easy to recruit workers and volunteers, as many Burmese believe that working with the dead is lowly and unlucky. In some neighborhoods, street signs reading “no hearses allowed” are put up to discourage hearses from driving through. Some in the film industry ostracized Kyaw Thu. His show-business friends were shocked that he carried coffins at funerals and some even refused to co-star with him. In 2007, Kyaw Thu’s acting career suffered another blow. He was accused of supporting the Saffron Revolution** after donating food to protesting monks, and was arrested and banned from the film industry. Working with the dead is generally regarded as lowly and inauspicious. Image courtesy of the FFSS Kyaw Thu’s personal presence at funerals offers much consolation to the families of the deceased. Image courtesy of the FFSS

But like the revolutionary heroes he has portrayed on screen, iron-willed Kyaw Thu took it all in stride, and even saw it as a blessing because it allowed him to dedicate his time fully to the FFSS and helping people. “The people’s tears are your tears. The people’s happiness is your happiness. As long as you have a compassionate heart, you can feel for the people,” he observed.

With his perseverance and energetic drive for social change, Kyaw Thu has won the support of many public figures, including Aung San Suu Kyi. All FFSS services are funded by private donations and heavily supported by volunteers. To date, the FFSS has conducted more than 150,000 free funerals, serving those in need regardless of class, race, or religion. With a staff of more than 100, and 500 volunteers, the society handles about 40–50 funerals daily, taking full responsibility from collecting the body and renting a funeral van, to providing a coffin and meeting all the expenses for the mortuary and cremation. The FFSS has won the support of many popular figures, including Aung San Suu Kyi. Image courtesy of the FFSS The FFSS provides 24-hour medical services to people of different religions and ethnic backgrounds. Image courtesy of the FFSS

The FFSS has since expanded beyond its core service of providing free funerals to include medical, educational, and many other social services. The Thu Ka Charity Clinic, which has about 50 volunteer doctors and 100 paid staff, provides free medical care ranging from eye surgery to kidney dialysis for some 100 patients daily. The FFSS also operates a 24-hour emergency response service with a fleet of ambulances, and runs a charity school for children from poor families providing free vocational training such as IT and hospitality. In addition, it is involved in humanitarian relief, such as providing aid after Cyclone Nargis, and a range of environmental and healthcare programs.

In 2015, Kyaw Thu won the Ramon Magsaysay Award,*** for “his generous compassion in addressing the fundamental needs of both the living and the dead in Myanmar—regardless of their class or religion—and his channeling personal fame and privilege to mobilize many others toward serving the greater social good.”**** On receiving the award, a modest Kyaw Thu said, “I got this prize not only because of me but also the unity of donors, volunteers, and staff all together.” Kyaw Thu’s immense popularity with the masses and their support of the FFSS has, as expected, led some to be wary of his political ambitions. But as he expressed in a post-award interview, “I don’t want that dirty political life. But in my social work, I can really do things and reach out to the people with a true heart.” *****

Kyaw Thu is also quick to emphasize that the FFSS is not a political engine: “We don’t distinguish between religions, between enemies and friends. We help all sorts of people.” Through the years, the FFSS has buried everyone from pro-democracy activists to army-linked elite politicians. In early 2017, the FFSS provided funeral assistance to U Ko-Ni, a prominent Muslim lawyer and strong proponent of inter-religious harmony, who was assassinated at Myanmar International Airport, and U Nay Win, the taxi driver who was shot dead while chasing the attacker. The Thukha Charity Clinic offers a range of free medical services such as dialysis, which is barely affordable for Myanmar’s poor. Image courtesy of the author 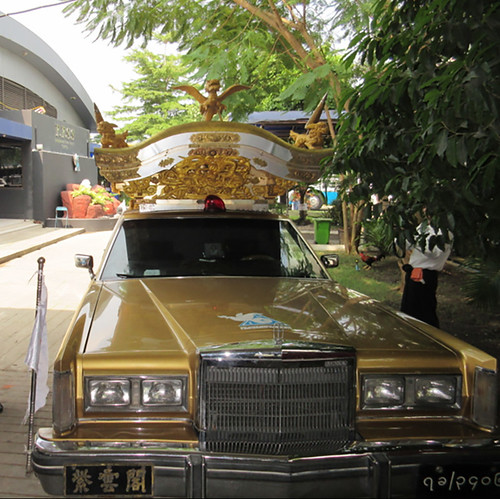 One of the FFSS’s elaborate hearse vehicles. Image courtesy of the author

Work at the FFSS has changed this once-celebrated film star’s outlook on life and work. “After witnessing and experiencing many happenings in my life, I have come to know more about the value of life,” he explained. “As an actor, I used to crave publicity and chased money and fame, but now I want nothing but to help those in need.”

After years of waiting on the dead, Kyaw Thu is ready to stare his own death in the face: “I am not afraid of dying. Death is our inescapable destination. We all are on the path to death, whether rich or poor, famous or unknown. When you die, you cannot take your wealth and fame. We leave nothing behind except our good deeds. So we should do as many good deeds as we can while we are still breathing. The rest will take care of itself.”

For this legendary hero of Myanmar, life has no regrets. Baring his left arm, he reveals a tattoo that reads: “Hey! Walk your own path. Do your own duty. Fulfill your own obligations. Be guided by your own virtue. Write your own history. That’s all. Kyaw Thu.” * From Star of the Screen to Carrying Coffins (The Irrawaddy)

** A series of nonviolent political protests and demonstrations in August–October 2007 triggered by the military government’s decision to remove state subsidies on fuel prices.

*** Similar to the Nobel Prize, the Ramon Magsaysay Award is awarded to Asian individuals achieving excellence in their respective fields.