On Bhikkhunī Ordination by Bhikkhu Analayo: An Interview with Bhante Kusala The Agama Research Group at the Department of Buddhist Studies at the Dharma Drum Institute of Liberal Arts in Taiwan recently published the book Bhikkhunī Ordination, From Ancient India to Contemporary Sri Lanka, by Venerable Bhikkhu Analayo.

The book aims "to facilitate a better understanding of what underpins the twentieth century revival of bhikkhunī ordination in Sri Lanka, and elsewhere in South Asia." The book provides the reader with original passages in Pali with English and Sinhala translations for a coherent reading of the Vinaya, with special reference to the narrative background of the Vinaya rules. Towards the end of the book, the present situation of bhikkhunis in Sri Lanka, Burma, and Thailand is discussed. In the conclusion, Bhikkhu Analayo relates the significance of the revival of bhikkhuni ordination to the revival of lay meditation in Theravada societies, in the past century.

The book was translated into Sinhala by Bhante Kusala, a Theravada monk from Sri Lanka.

Bhante Kusala was born in Sri Lanka in 1987. He entered monastic life at the age of 16 at Gangagiri Vihara in south Sri Lanka, where, in 2007, he received his higher ordination (upasampada). He continued to pursue his undergraduate and graduate studies at the University of Peradeniya in Sri Lanka, later moving to Italy, to study cognitive science and engage in mindfulness-based research at the University of Trento, and to Cambridge, Massachusetts, to pursue a Master's degree from Harvard University as a Robert H.N. Ho Family Foundation scholar.

Bhante Kusala has served as a translator for Bhante Vimalaramsi, Venerable Sister Khema, Ajahn Brahm, and Ajahn Brahmali. He has lectured and taught internationally and served as a resident chaplain at the Brigham and Women’s Hospital, and at the Dana Farber Cancer Institute, from 2017 to 2018. In 2018, he was invited to the Great Lakes Buddhist Vihara outside Detroit, Michigan to continue his Dhamma service.

I spoke with Bhante Kusala about his involvement in the translation and purpose of the book.

Buddhistdoor Global: How did you get involved in the translation project?

BDG: What is the book about?

BK: The book is about women’s ordination. There are ordained nuns who have not received the bhikkhuni status in most countries, except for Sri Lanka. Mainly in the Theravada world. Some nuns, who are not yet bhikkhunis, don’t have the privilege to become fully ordained nuns. So, when Venerable Analayo decided to fulfill his duty by really digging through the canon, the Theravada canon, and especially the Vinaya Pitaka, he wanted to check the narrative background of the Vinaya material and build up a coherent story that tells what the exact motivation of the Buddha was when he laid out these rules, and how the Buddha intended monks to collaborate with the nuns so that there is interaction between monks and nuns.

Bhikkhu Analayo also points out that, according to the Vinaya narrative, it is the responsibility of the monks to revive bhikkhuni ordination, when there are no bhikkhunis to take action. Bhikkhu Analayo also notes that when the Buddha amends one of his rules to establish a new rule, due to something that happened between the two establishments, the first ruling is not completely rescinded by the later. He says that both rules are valid and should be applied by monks in different situations accordingly. 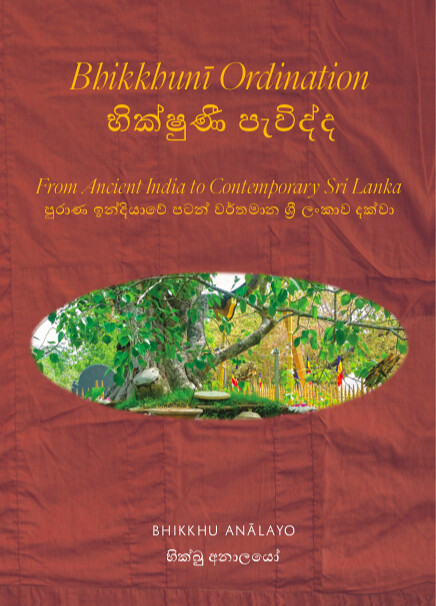 Cover of Bhikkhunī Ordination. From buddhismuskunde.uni-hamburg.de

Bhikkhu Analayo also looks at full ordination from a social perspective. In many places in this world, women are given equal status, and women have started working in major jobs that have been previously limited to men. For example, we have women who are senators, and even presidents in Theravada countries who are women, so why can’t we have bhikkhunis. These women are often already doing so much service out there in the world, we should give due recognition to them. These are some of the themes discussed in the book.

BDG: Bhante, what do you feel is at stake in the work?

KB: Venerable Analayo would like the leaders, especially the chief monks from Theravada countries, to read the book and to sympathize with the situation of the nuns. He would like for leaders to attend to this matter more seriously than before, and openly discuss it. Some monks already support the nuns but are not open about it, or have decided years ago not to openly discuss it. They, however, can change that standing and decide to unanimously agree to welcome the already ordained bhikkhunis in the Theravada tradition.

BDG: For people that are not aware of the nuances of the situation of re-instating bhikkhuni ordination, what does full bhikkhuni ordination mean? What capacity does that give the practitioner, and why do you think that the Buddha fully ordained women?

KB: So, there can be ten preceptor nuns, who have only taken the ten precepts. They are very close to being lay women, who can also take ten precepts. When you are a fully ordained nun, you have a really strong Vinaya background supporting your going forth and establishing you in the Buddha's teachings. Fully ordained nuns have more than 300 rules. Yet, the full ordination is not about the number of rules or the number of precepts they have to follow. It is about how capable they are, just like monks, to practice and become enlightened.

The Buddha hesitated when his stepmother requested to be fully ordained. He hesitated because of the potential dangers he saw associated with women living in forests just like monks. Without any male protectors, they might have to face dangerous situations like getting raped or assaulted. The Buddha did not want to place women in that situation so he refused the request several times. Later, as Venerable Analayo notes, when Mahaprajapati shows that she is capable of ordaining and has gathered 500 followers also demonstrating the strengths needed to ordain, he laid out several rules and permitted them to be fully ordained as bhikkhunis. There were different social conditions in the time of the Buddha that affected his decision. The Buddha also said that women can be fully enlightened without being fully ordained, but if they really wish to live a monastic life, he made sure that it is possible with the protection of the monks. Mahaprajapati pleading with the Buddha to let women enter the order. From nalanda.org.my

In his book, Venerable Analayo also takes the Agamas (or Nikayas) into account in his study. He has a very strong background in the Agamas, so he uses that knowledge to fill the gaps that are missing in the Theravada canon, to support his arguments.

I don't want to mis-represent him, but as far as I understand he is aware that some monks oppose his work, but someone has to do it.  It is important that scholar-monks such as himself invest energy and work into this matter.

BDG: There is a misconception in and around some of the Theravada lineages that some of the monks are not supportive of reinstating full bhikkhuni ordination, yet in my own research I have found it to be otherwise. Would you agree? Do you find that many monks actually are supportive and are also coming forward?

In Sri Lanka, for instance, bhikkhunis don’t receive an identity card stating that they are bhikkhunis, but bhikkhus do. This is ultimately up to the government to decide, but the government is looking at the chief monks. And the monks don’t say anything about the issue in public. So, this decision bounces back and forth between the government and the monks.  I met some of these high-level monks, or at least their secretaries, and I found that some of these monks really help bhikkhunis with their actions but they don't openly make statements, because statements can be misinterpreted both by the local community and by other Theravada countries, which may cause problems for the peace of the Sangha. So they are not really open about their support, or have stopped talking about it a long time ago. That is what I feel, that is what I have discovered by supporting this work.

As a young monk, however, I have female friends who wish to become fully ordained, and I don't want them to know there is this slight discrimination from the monks. I want to fully support their idea of ordaining and taking the Vinaya seriously to follow the path of a monastic.

KB: I am aware that it is difficult for anyone who seeks to be fully ordained in the Theravada tradition to have these obstacles on their path, but I feel that if one doesn't care about their status, they can still be ordained and practice under a teacher who has compassion and who is willing to guide them. If someone is motivated to become enlightened, it does not matter whether they are a bhikkhunis or what their rank is, it's the intention to practice and be inspired by the teachings of the Buddha that matters. This, I think it is important to say in a conversation like this.

The Legality of Ordaining Nuns according to Buddhist Law​
Studying Nuns’ Ordination: How monastics in the academy can make a difference in the real world
The Buddhist Stance on Theravada Women’s Issues: A Conversation on Gender Equality and Ethics with Ajahn Brahmali
An Afternoon with Ajahn Sujato: Personal Courage and Restoring the Sangha’s Moral Purpose​
Reviving the Bhikkhuni Sangha in Indonesia: an Interview with Ayya Santini​
Anukampa Bhikkhuni Project: Nuns’ Monastery Set to Become Reality​
Banning Ajahn Brahm’s speech on nuns was a spectacular own-goal​
The Journey of Women Going Forth into the Bhikkhuni Order in Bangladesh: An Interview with Samaneri Gautami
Revival of Bhikkhuni Ordination​