By the time Daw M. was brought to Twilight Villa, her life was hanging by a thread. Left to die on the street after being hit by a vehicle, the multiple wounds on her body had been badly gnawed by rats, which had also chewed a gaping hole in her back. One of her lungs was punctured by a broken rib. Despite receiving treatment and care at the nursing home, Daw M. died six months later. No one knew her real name or her age.

“No person should suffer such inhumanity,” exclaimed Daw Thet Nwe, a director at Twilight Villa nursing home for the elderly. “It is such a shame that this is happening to old people in our society. The people who do this, they should be prosecuted.”

But with no identification and no traceable family, it is difficult to seek legal recourse. Even if the families are located, chances are that they are often impoverished and have no capacity to care for a sick elderly relative.

Two in-house doctors, supported by volunteer doctors, tend to the medical needs of the residents. Image courtesy of Twilight Villa 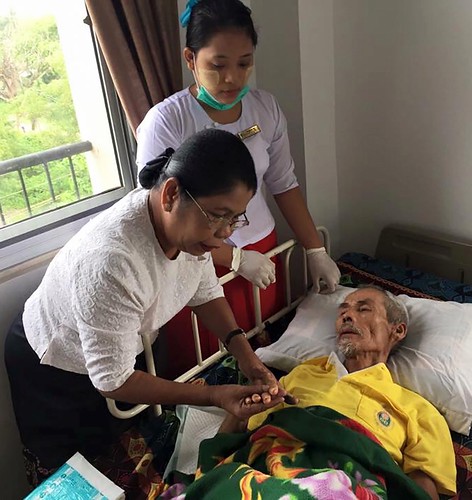 Daw Than Myint Aung stresses that kindness and compassion are the keys
to building a loving and caring environment. Image courtesy of Twilight Villa

Located in a quiet neighborhood in East Dagon Township, an hour’s drive from downtown Yangon, Twilight Villa, or See-Zar-Yeik in Burmese, is perhaps the only nursing home that was willing to receive Daw M. in her horrific condition. Founded in 2010 by award-winning writer Daw Than Myint Aung and Daw Khin Ma, a criminal lawyer, Twilight Villa was set up to take in the homeless and sick elderly refused by other nursing homes.

Like Daw M., many of the home’s residents arrive emaciated, sick, and disorientated. Many have no family or support of any kind. Others have been deserted by their families or caregivers—sometimes out of sheer desperation due to poverty, at other times mere inhumanity—abandoned at roadsides, near markets, railway stations, under bridges, outside temples, even in cemeteries. Abuse and neglect of the elderly are the rise in Myanmar. Many of those admitted to Twilight Villa are disorientated, emaciated, and with severe injuries. Image courtesy of Twilight Villa 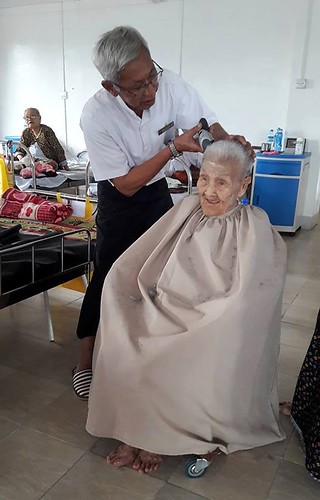 From just eight residents in a single-floor structure, the home has expanded in less than 10 years to a modern four-floor building that includes an intensive care unit, all thanks to the generosity of its donors. There are now some 120 residents, 107 of whom are under intensive care. About two-thirds are women.

All of the residents are more than 70 years old, and many have no family, or have no memory of their past. The oldest is 108-year-old Daw Kan Yin Ma. Shriveled and bed-ridden, she has been in intensive care for three years. Daw Than Tin comes from the Shan State. At 106 years old, she had outlived her husband and all her children. Buddhist festivals, such as Thadingyut, which marks the end of the Vassa rains retreat, are observed in the compound. Image courtesy of Twilight Villa

Paralyzed on one side of her body and hardly able to speak, 77-year-old Tin Hlaing was left to die at a roadside by her family until a kind passerby brought her to Twilight Villa. Daw Pu, 82, who was brought to the home by police, had only a note in the pocket of her jacket stating her name and age, but is unable to remember anything else.

With no children to look after her, 88-year-old Daw Kyi Kyi was referred to the home after her husband and two sisters died. Much of her time is devoted to praying and meditating. “I am happy here,” she saysi. “I can live peacefully; it’s like living in heaven with all my friends.” 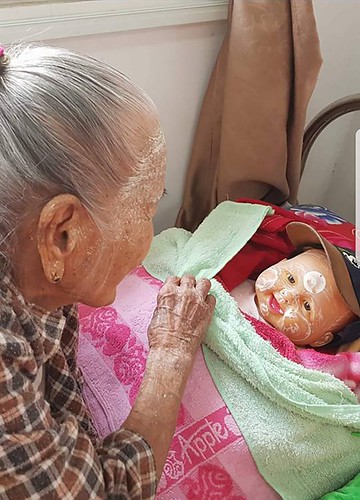 Tin Tin, 88, spends much of her time tending to her
companion baby doll, her best friend. Image courtesy of
Twilight Villa

Eighty-seven-year-old Tin Tin was sent here because her family could no longer care for her. When the nurses fetched her from her home, her only request was that she could bring along her best friend who, as she explained, “doesn’t eat, and is always smiling.” She seems happy taking care of her companion baby doll for much of the day.

Then there are those who have fallen on difficult times after a more glorious past, such as 97-year-old Khin Kyi. Once a famous actress, she came to Twilight Villa because her only daughter is unable to care for her. Rich or poor, each has his or her own life story, even if it is buried deep in their memories. There may be little to look forward to, but here at Twilight Home many have found a community filled with kindness and love. Everyone, from the directors to the caregivers, from the nurses to the doctors, tries their best to relieve their loneliness by creating a caring and supportive atmosphere, looking after not only their physical and medical requirements but also their mental and emotional needs.

Buddhist festivals and alms-giving ceremonies are observed regularly at the home, and frequent visits by monks offer much-needed spiritual connection and consolation for the elderly. At the end of their journey through life, they are given a dignified send-off by the staff. A growing number of old people in Myanmar live alone and are left to fend for themselves. Image courtesy of Twilight Villa

The plight of the residents of Twilight Villa is only a reflection of a wider problem in Burmese society. As in many of its neighbors across Southeast Asia, the number of older people in Myanmar is increasing at an alarming rate, having virtually quadrupled over the past 60 years. According to a report by the Department of Population and the United Nations Population Fund (UNFPA), released in September 2017, Myanmar’s aging population will triple in the next 30 years. By 2030 this proportion is expected to rise to 15 per cent of the population, and by 2050 older people will likely comprise a quarter of Myanmar’s total population.*

Caring for the aged will be one of the biggest social challenges Myanmar has to tackle. A supportive environment that includes social protection, affordable healthcare, housing, and infrastructure that facilitate the physical and social well-being of the elderly is needed to cope with the growing wave of elderly in the years to come. And all of this will require funding and resources. But in a country where pensions and social security are practically unheard of, there is no safety net for the aged. Years of military oppression and poor governance have left tattered infrastructure and an ailing healthcare system with no quick fix. Men make up about a third of the residents in the home. Image courtesy of Twilight Villa With demographic and social changes, poverty and a lack of social protection, many elderly become destitute. Image courtesy of Twilight Villa

Despite Myanmar’s impressive GDP growth, life for the masses has not improved and the income divide is ever widening. About 32 per cent of Myanmar’s 50 million people still live in poverty. Of the 15.8 million living below the poverty line, 13.8 million are in rural areas.**

Daw Khin Ma Ma of Twilight Villa explains: “Poverty is at the centre of all this. If an elderly person suffers a stroke, they become a burden. The family still needs to make a living every day; children have to go to school. Who will take care of them?”

Currently, there are 81 homes for the aged across the country, which accommodate more than 3,000 people, all operated by private or religious organizations. Since taking office, the new civilian government has set up only one new public daycare centre in Yangon—the only such center in the entire country. Exclusively for the over 90s, it receives just 10,000 kyat (about US$7) per month in funding.***

In December 2016, an Elders Law was enacted to protect the rights, health, and economic well-being of the elderly,**** but many senior citizens are unaware of this. While the lack of structural support makes it hard for the poor to care for the sick elderly, the difficulties are compounded by changes in family structures. Traditionally, in Buddhist Myanmar where religion and culture interlace, a strong family unit forms the cornerstone of society. Children are taught to pay respect, not only to the Buddha, the Dhamma, and the Sangha, but also to teachers and parents. Filial piety and care for the elderly are seen as noble practices. Extended family networks and community bonding means that there is always someone to look after the elderly. Although this practice is common in most rural communities, it is gradually being eroded, especially in urban settings. Rapid urbanization, declining birth rates, and migration for employment opportunities mean that there are fewer family members to look after the elderly.

Demographic, social, and economic changes are placing great stress on traditional values, leaving more and more old people to fend for themselves. It is becoming increasingly common to see old people struggling to survive, begging for money on busy streets, outside temples, or at bus stations. For these abandoned elderly, homes such as Twilight Villa are their last hope, without which their lights might soon be snuffed out on the streets—alone, forsaken, and forgotten. Monks offer blessings and solace to a resident in intensive care. Image courtesy of Twilight Villa

Waiting on the Dead
myMe: Hope on Wheels for Myanmar’s “Lost” Generation
Thabarwa Centre — A Refuge for the Homeless in Myanmar